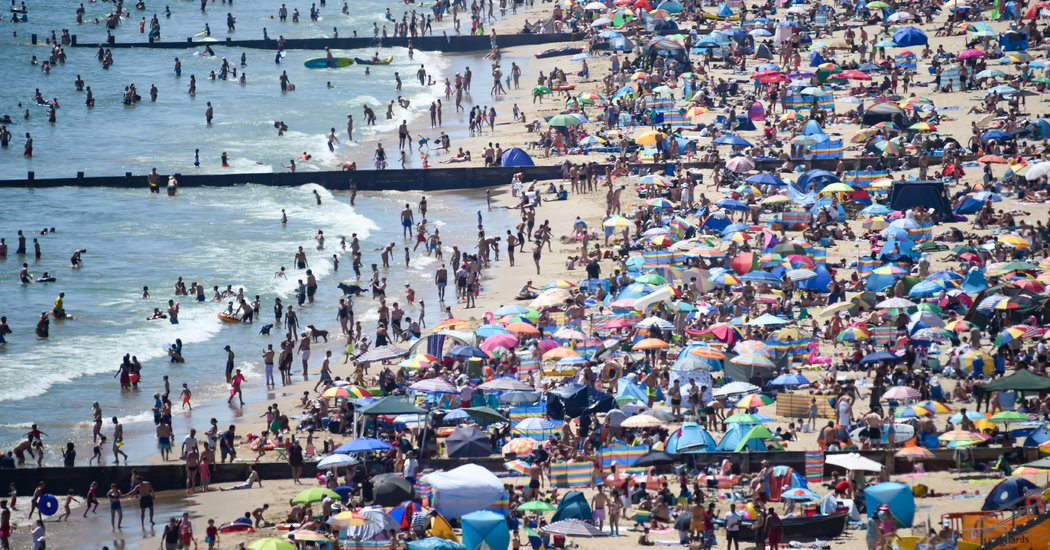 LONDON — They descended by the tens of thousands on Britain’s southern beaches and jammed into city parks. They cavorted by the hundreds in swamps and streams. They attacked police officers who tried to disperse illegal block parties. And hundreds became stuck in mud flats while trying to reach the sea at low tide.

By Friday, the third sweltering day in a row in a country where many homes lack air conditioning, the message was abundantly clear: Many Britons are done with the lockdown.

Although Prime Minister Boris Johnson of Britain announced a major easing of lockdown restrictions this week and declared the beginning of the end of a “long national hibernation,” all pubs, restaurants and cafes will remain closed until July 4, leaving the public with few venues to enjoy their newfound freedom.

“It’s like an avalanche of people everywhere,” said Rachel Cox, 55, a resident of Notting Hill in western London who said she had been woken up on Thursday night by the sound of partygoers pelting police officers with various objects. “It’s as if the last three months of fear and caution over the coronavirus vanished overnight.”

Scores of officers came under attack this week as they tried to crack down on illegal street parties. At least 22 officers were injured in south London on Wednesday night as they were attacked with bottles and other objects while breaking up an unauthorized music event.

Under the government’s new guidance, groups of up to six people are allowed to meet outdoors. But each night, hundreds of people have been gathering on Notting Hill’s Portobello Road for group drinks, block parties, music events and raves.

Even as the rate of coronavirus deaths and new infections has fallen considerably in recent weeks, scientists have warned that complacency around social distancing measures could set off a second wave of the virus. Britain has the world’s third-highest confirmed coronavirus death toll, with more than 43,000 deaths, and over 300,000 reported infections.

“We’ve been cooped up for so long, and I think it’s understandable that while the virus is under control people want to just go out and have some fun,” said Amy Hodge, a 21-year-old design student who attended a small street party in western London on Thursday. “It was very mellow and chilled. Not everyone is out to cause trouble.”

Although the hot spell — which has sent temperatures into the high 80s Fahrenheit — is expected to subside on Saturday, police patrols will increase over the weekend and all unauthorized gathering will be dispersed, London’s police chief, Cressida Dick, said on Friday.

“These events are unlawful,” she said. “They shouldn’t be happening, and for our officers who are simply doing their duty to be attacked in that manner is utterly unacceptable.”

In the beach resort of Bournemouth, a major incident was declared on Thursday after emergency response teams were deployed to deal with overcrowding, traffic gridlock and antisocial behavior that included leaving behind mounds of litter, fighting, and urinating and defecating in public.

Beaches in the area can usually accommodate high volumes of people. But many of their resources, including public bathrooms, are still largely unavailable because of coronavirus restrictions.

Under regular circumstances, “the pubs are open, the cafes are open, the hotels are open, people aren’t just congregating here, they are not bringing vast quantities of alcohol,” Vicki Slade, the leader of Bournemouth, Christchurch and Poole Council said in a statement on Thursday.

“The behavior of people, parking on the middle of roundabouts and pavements, people defecating in a cardboard box on the beach and leaving it for our staff to deal with, refuse collectors being abused for doing their job,” she said — “that is what made it unprecedented, and that is why we had to take action.”

Hundreds of beachgoers in the seaside town of Weston became trapped in mud flats as they tried to reach the sea during low tide. Pictures shared on social media showed women struggling as they tried to carry children out of the swampy terrain, and the Weston-super-Mare Coast Guard said it had been called out 55 times on Thursday to rescue people stuck in the mud.

In South Wales, where lockdown restrictions remain in place, a violent brawl broke out on a beach on Thursday — a scene that one official described as a “contagion of stupidity,” the BBC reported.

Matt Hancock, the country’s healthy secretary, threatened to close down beaches if social distancing measures continued to be violated.

“We do have that power,” he said. “I am reluctant to use it because people have had a pretty tough lockdown and I want everybody to be able to enjoy the sunshine. But the key is to do it with respect for the rules.”

Thousands of Liverpool soccer fans also gathered on Thursday night to celebrate their Premier League championship victory, even though the police had urged them to stay at home. Jubilant fans descended onto the streets outside the team’s stadium in northwestern England where they sang, danced and set off fireworks.

Liverpool has been disproportionately hit by the coronavirus, and the city’s mayor, Joe Anderson, said it was disappointing that so many fans had ignored the pandemic guidelines.

On Friday, the weather cooled down a bit, but London’s parks were still full of large groups frolicking, sunbathing and exercising.

“Thousands of people should not be sitting on top of each other at the beach, and the parks should not be this full during a pandemic,” said Anton Bregman, a dancer from western London, as he meandered through groups of people in London’s Hyde Park on his roller skates.

“I get the frustration, though,” he said. “I mean, we’re allowed out now, but everywhere is still shut. Where exactly are we all supposed to go?”