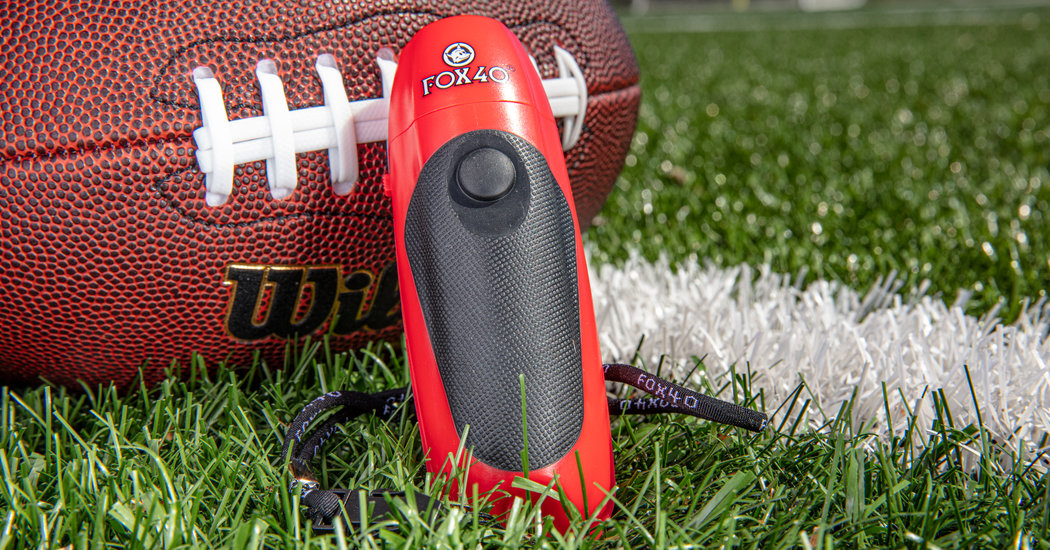 More than 140 years after it made its debut, in English soccer, the whistle is the most recognizable sound in sports.

From soccer fields and football stadiums to basketball arenas and wrestling mats, from youth sports to the pros and from one continent to the next, the whistle is the thread that winds its way through global sports. It often marks the beginning and the end of an event, signals pauses and restarts in tense moments, and acts as an exclamation point after a big play. In the symphony of sport, the whistle is the soprano: crisp, distinct and capable of leaving one’s ears ringing.

But in the age of coronavirus, the whistle may face an existential challenge, or, at the very least, a serious rethinking. To use almost any whistle requires a deep breath and then a forced burst of droplet-filled air — things that, during a pandemic, deeply concern medical experts.

Is there a better way? That is what people keep asking Ron Foxcroft.

Foxcroft, a former N.C.A.A. and Olympic basketball official, is the most trusted name in North America when it comes to whistles. His company, Fox 40, sells about 15,000 a day — mostly the so-called pealess whistle, which accounts for the bulk of his business.

About a decade ago, Fox 40 also began making and marketing an electronic whistle. It operates with the push of a button, and its tones can be adjusted by a switch on the side. The current versions on the market produce sounds that range from 96 to 120 decibels (or from the sound of a lawn mower to that of an ambulance siren).

It is this version that in recent months has come to dominate Foxcroft’s conversations, emails and text messages.

Fox 40’s version is one of a handful of models available; Windsor and iSport, among others, make their own versions. But Fox 40’s position in the industry — its clients include the N.B.A. and the N.F.L. and even the White House, where multiple presidents have used its whistle to start the annual Easter Egg Roll — means it has seen a surge in both inquiries and orders.

Before mid-April, the Canadian company’s largest order for electronic whistles had come from a European train company, which bought 3,000 for its employees. Since May 1, though, Foxcroft estimated, the company had received orders for about 50,000 more. Most are headed to sports officials.

Many of the referees who receive them will be trying one for the first time. Verne Harris, a Division I men’s basketball official for the past 32 years, said in an interview that he did not know the electronic whistle existed until this spring. But during his coronavirus-imposed refereeing hiatus, he said, he has been pondering what changes might be coming to the profession.

“And when you blow on the whistle,” he added, “then all of those particles are coming out into the air.”

Some leagues are making plans to use them. Hockey Quebec, the governing body for the sport in the province, recently included the mandatory use of electronic whistles by referees and coaches in its protocols for a return to play. And the N.C.A.A.’s chief medical officer this spring raised the idea that game officials be included — along with trainers and some coaches — in the group of people required to wear masks at games.

While the push-button whistle, which looks a bit like a small flashlight, certainly addresses some virus fears, head-to-head comparisons with the sounds of more traditional whistles can sometimes be unsatisfying. And in interviews over the past several weeks, veteran referees raised more practical concerns.

“Are they weatherproof? Do they work in the snow? Do they work in the rain? You know, those sorts of things,” said Steve Shaw, the national coordinator of officials and secretary rules editor for college football, who tried out Fox’s electronic whistle in May. “And do we have to carry a spare battery around with us?”

Other officials wondered how an electronic whistle would be synced with the Precision Time System, a relatively new mechanism that uses the sound of referees’ whistles to stop the game clock. Experts say this system can save 30 seconds or more of playing time during the average 40-minute college basketball game, and it is used in the N.B.A., the W.N.B.A. and the men’s and women’s N.C.A.A. basketball tournaments.

“When you put air in the whistle it triggers the clock to stop at that point like instantaneously,” said Donnie Eppley, a Division I men’s basketball official since 1997. “I’m not sure how they would do that with an electronic whistle.”

Shaw said he thought the electronic whistle could be a good alternative if sports officials determined that referees should shift away from traditional models. But the most difficult part in using the new whistle is just that, Shaw explained: using it. He and several other officials interviewed raised concerns about what is considered to be one of the graver sins in their job: the inadvertent whistle.

“We have that momentary time lag between taking your whistle from your hand to your mouth, and that little instance sometimes can save you from blowing an inadvertent whistle,” Shaw said. “And this has none of that kind of delay built into it because it’s right there in your hands. And right there, your thumb is on the button. So we’d have to really talk through being patient.”

Eppley added: “I can see, maybe, a lot of inadvertent whistles where people are just running up and down the court and you’ve got this thing in your hand and you just inadvertently touch the button.” He called it a challenge of “whistle discipline.”

For now, the bigger challenge may be educating the experts tasked with making decisions regarding the return of sports about the electronic whistle’s existence.

Brian Hainline, the chief medical officer of the N.C.A.A., said in an interview that he had suggested during a conference call in May that officials might be among those, including coaches and trainers, who need to wear masks until the pandemic is over.

But upon learning about the electronic whistle, he became a quick convert.

“I hadn’t thought of this, but the idea of this electronic whistle, it actually solves a lot of problems,” Hainline said. “It’s a brilliant idea, in my opinion.”