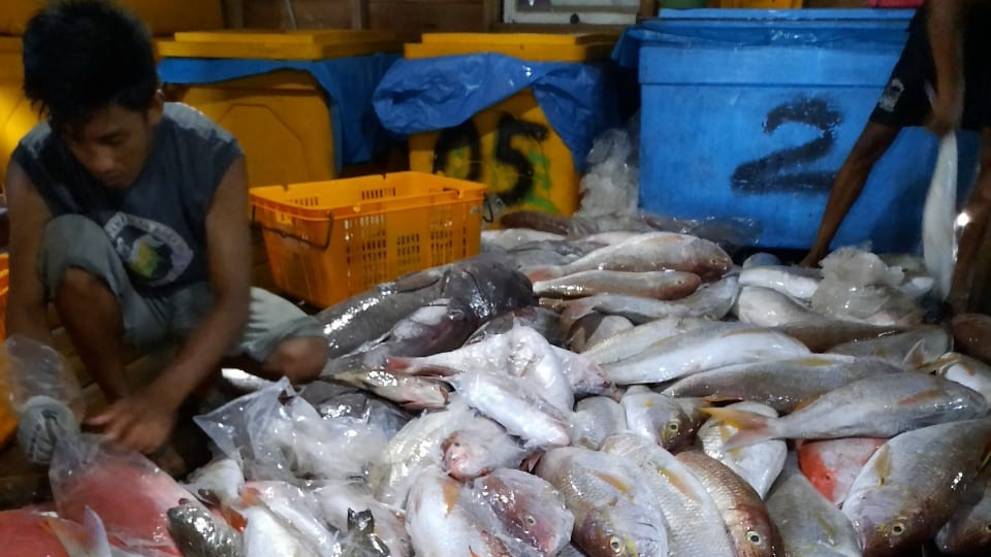 JAKARTA: Fisherman Iwan, who like many Indonesians goes by one name, has been in the industry for the last 10 years.

Mr Iwan was born and raised in Natuna islands at Indonesia’s outermost area near the South China Sea, which is rich in fishery resources.

Despite an abundance of fishes in the sea, the 44-year-old said he has never benefitted economically in a big way.

There were times when Mr Iwan, who works together with two other fishermen on a 6GT (Gross Tonnage) wooden fishing boat, could earn about 5 million rupiah (US$355) per month. But nowadays he usually only earns about 1 million rupiah.

“It is now harder to find fish, and the prices are getting cheaper,” Mr Iwan told CNA.

He claimed that illegal fishing activities by foreign vessels has played role in depleting the availability of fishes in the sea, while COVID-19 is causing prices to dip.

While the government wants to grow the fishery sector amid an economic slowdown brought about by the pandemic, it has to overcome various challenges including infrastructure, financing and lack of human of resources, among other things.

Mr Edhy Prabowo explained during a press conference that the scheme would be used for helping fishermen, cultivation, processing and marketing. The package will also be used to supervise fishery resources, such as watching for illegal foreign vessels and internal audit.

READ: Why Indonesia is reaffirming its position on the South China Sea and turning down China’s offer for bilateral talks

Mr Prabowo said he was optimistic that the fishing industry can grow. “The potential is still very high because there is a potential for fish demand in the market both domestically and abroad,” he noted.

Additionally, the minister believed the fishing industry could play a crucial role in reviving Indonesia’s economy which has been hit hard by COVID-19.

In early May, the national statistics agency reported Indonesia’s first quarter Gross Domestic Product for 2020 at 2.97 per cent, the lowest level since 2001.

Despite the headwinds, the fishery industry grew 3.52 per cent in the first quarter of this year.

The ministry of marine affairs and fisheries estimates that Indonesia’s fishery industry is worth around US$1.34 billion annually.

The government’s move to further develop the fishing industry is viewed positively by analysts, but they also noted this has actually been an ongoing effort.

“I think this is a great idea considering the resources and the potential that we have as a country with vast water areas and the location in the tropics with rich biodiversity and supply,” Jakarta based independent marine and fisheries consultant Ahmad Baihaki told CNA.

He added: “At the moment, this is also one of the sectors and commodities that we can self-sustain and do not need to import, instead, we export abroad.”

“But this narrative has been the topic for quite some time over several administrations. So I really hope this time, there is an actual seriousness for a breakthrough to realise this ambition.”

Mr Abdul Halim, executive director of Jakarta based NGO Center of Maritime Studies for Humanity, said that the vision has existed for almost two decades. However, the government’s intention to do more has been signalled more clearly lately.

This being said, both analysts stated that a lack of reliable, accurate data regarding the availability of fish stocks in the ocean, as well as catch and landing data that affect fishery management and harvest strategy, have hindered the attempt.

Another issue is infrastructural constraints, they said.

Electricity supply to the ports is a particularly acute problem, Mr Halim said. As a result, the national logistics system cannot function as it should because its cold storage is not functioning optimally, he explained.

Natuna-based fish exporter Al Izhar told CNA that he would benefit from better infrastructure in his hometown, especially in terms of tackling connectivity issues.

“At the moment, air transport is very troublesome and expensive in Natuna,” Mr Izhar said, adding that aviation links are very much needed to export fishery products.

The lack of access to markets and financing have also affected the development of the fishery sector, said Mr Baihaki who also said that there are many untapped investment opportunities.

Around 90 per cent of fishery operators are small-scale enterprises, who require help with financing and management.

JAVA AS HUB OF FISHERY INDUSTRY

Mr Baihaki also highlighted that the industry is heavily focused on Java island, where capital Jakarta is situated and the centre of Indonesia’s economy.

Fishes caught in the eastern part of Indonesia are usually processed in Java, Mr Baihaiki explained.

“Exports of the commodities also typically have to go through main ports in Java. Imagine how much costs the businesses can save if those fishes are caught, processed, and sent abroad from ports in the eastern parts of Indonesia.

“Most of Indonesia’s main export destinations are closer to the areas where the fishes were caught,” the expert said.

In the first quarter of 2020, the ministry of marine affairs and fisheries recorded that Indonesia’s main export destinations are the United States, China, ASEAN, Japan and the EU.

During the late May press conference, the fisheries minister noted that the industry still needs plenty of human resources to harvest lobsters.

But not many people in the country are equipped with the required knowledge and skills, he said. Those who do have the expertise tend to work abroad, said Mr Prabowo.

For those who work abroad, it is not a bed of roses too. There have been incidents when Indonesian fishermen who worked for foreign vessels were allegedly abused.

When it was reported in mid-May that there were Indonesian fishermen working for foreign vessels who had been treated unfairly, Mr Prabowo said he saw two solutions to the ongoing problem.

If the former option is taken, his ministry is ready to create jobs so that Indonesian fishermen can work on local fishing boats, said Mr Prabowo.

“As long as the government can manage and set a standard payroll for crew members of fishing vessels,” Mr Suhufan said.

The Jakarta based activist also said that at the moment there are about 6,000 fishing vessels which are over 30GT.  This could be increased to 10,000 ships so that more jobs can be created.

For now, Mr Iwan, the fisherman in Natuna has two wishes.

“If the government wants to give aid, it has to be in line with our needs. And please increase the value of our products so the livelihoods of all fishermen will improve.”