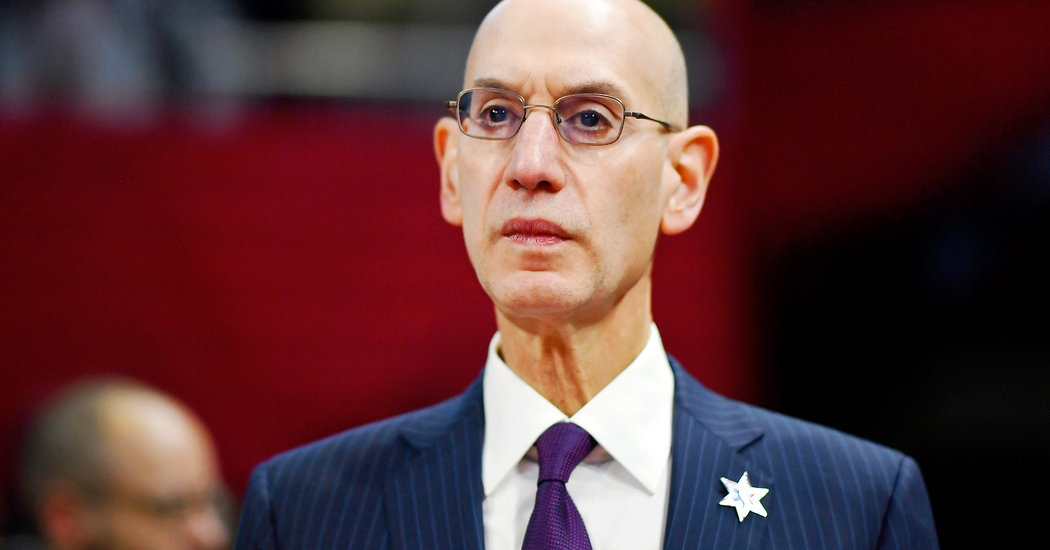 Despite what Adam Silver, the N.B.A. commissioner, described as an “increased” level of concern over a significant rise of coronavirus cases in Florida, the league moved forward on several fronts Friday by formalizing its plans to restart the 2019-20 season at Walt Disney World near Orlando.

The league and the National Basketball Players Association jointly announced that they had officially finalized their agreement to revive the season with 22 teams next month, and the N.B.A. was set to reveal the 88-game schedule leading into the playoffs later Friday.

The league and the union also announced that, out of 302 players tested by their teams on Tuesday, 16 were positive for the coronavirus. During a conference call with reporters Friday afternoon, Silver said the two organizations “ultimately believe it will be safer on our campus than off it.”

“My ultimate conclusion is that we can’t outrun the virus, and that this is what we’re going to be living with for the foreseeable future, which is why we designed the campus the way we did,” Silver said. “While it’s not impermeable, we are in essence protected from cases around us — at least that’s the model. For those reasons, we’re still very comfortable being in Orlando.”

Hours after Florida announced a single-day record of nearly 9,000 new coronavirus cases in the state — up from 5,511 on Wednesday — Silver said that the league had “no choice but to learn to live with this virus” and that no options for rebooting the season “are risk-free right now.”

Any player who tested positive this week must remain in isolation until they record two consecutive negative coronavirus tests at least 24 hours apart. Michele Roberts, the executive director of the N.B.P.A., said of the positive results that “one would have been concerning,” but she also expressed relief that there had not been more cases among the players.

“I’ve been holding my breath for the last few weeks,” Roberts said.

Said Silver: “None of the 16 were seriously ill in any way and was also a big relief for us.”

Players who test positive also must undergo cardiac screening and receive clearance from a physician before resuming basketball activities, according to the N.B.A.’s 113 pages of health and safety protocols governing the planned restart.

Malcolm Brogdon of the Indiana Pacers and the Sacramento Kings players Jabari Parker and Alex Len announced this week that they were among the 16 positive tests. Other players reported by various news media outlets to have tested positive include Sacramento’s Buddy Hield (as reported by The Athletic), Miami’s Derrick Jones Jr. (The Miami Herald) and two unnamed members of the Phoenix Suns (The Arizona Republic).

Nikola Jokic of the Denver Nuggets remained in his native Serbia this week rather than rejoin the team after he, too, tested positive. Jokic, though, was not among the 302 players tested this week, which included only players from the 22 teams involved in the season restart who are currently available for testing in their home markets.

The 22 teams participating in the N.B.A.’s restart are scheduled to report to the ESPN Wide World of Sports complex at Walt Disney World starting July 7. Until then, testing of players is scheduled to continue every other day until teams leave for Florida; part of the reason teams are spending two weeks in their home markets is to help with identifying coronavirus cases and getting those players isolated before all 22 teams convene.

The defending champion Toronto Raptors are already in Florida, training at Florida Gulf Coast University in Fort Myers, to avoid the travel restrictions involved in crossing the United States-Canada border.

As the N.B.A. released of its first batch of test results, Florida on Friday reported 1,051 new confirmed Covid-19 cases in Orange County, home to Disney World. Coronavirus cases have risen steadily all month in Florida since the N.B.A. and the players’ association ratified the return-to-play plan at the Disney complex on June 4 and June 5.

The N.B.A.’s positive test rate Tuesday was 5.3 percent, but the league did not announce results for coaches and team staff members who were tested. Teams will be allowed to bring up to 17 players to Disney World in traveling parties capped at 37 people, with a mandatory quarantine of 36 to 48 hours upon arrival until two consecutive negative tests are recorded. Testing, Silver said, is scheduled daily thereafter.

Beyond the health concerns, Oklahoma City’s Chris Paul, the N.B.P.A. president, expressed confidence in the league’s pledge to support players in their efforts to further the Black Lives Matter movement when play restarts.

“We all understand how powerful our voice is,” Paul said. “It’s never a ‘shut up and dribble’ situation. You’re going to continue to hear us and see us.”

Silver said the N.B.A. “may be the most uniquely qualified organization in the world to affect change” in the quest for social justice and racial equality, given that some of the league’s players, including Paul, are among the most famous black personalities in the country.

Still, the league, its players and major media partners like Disney all have considerable financial motivation, both this season and especially beyond, to get the game back on the court.

Silver conceded that the league’s return, especially amid Florida’s rising coronavirus crisis, was “definitely not business as usual.” Yet he insisted that the N.B.A. “must adapt” and would try to show the public “how we can balance public health and economic necessity.”

“We can’t sit on the sidelines indefinitely,” Silver said.