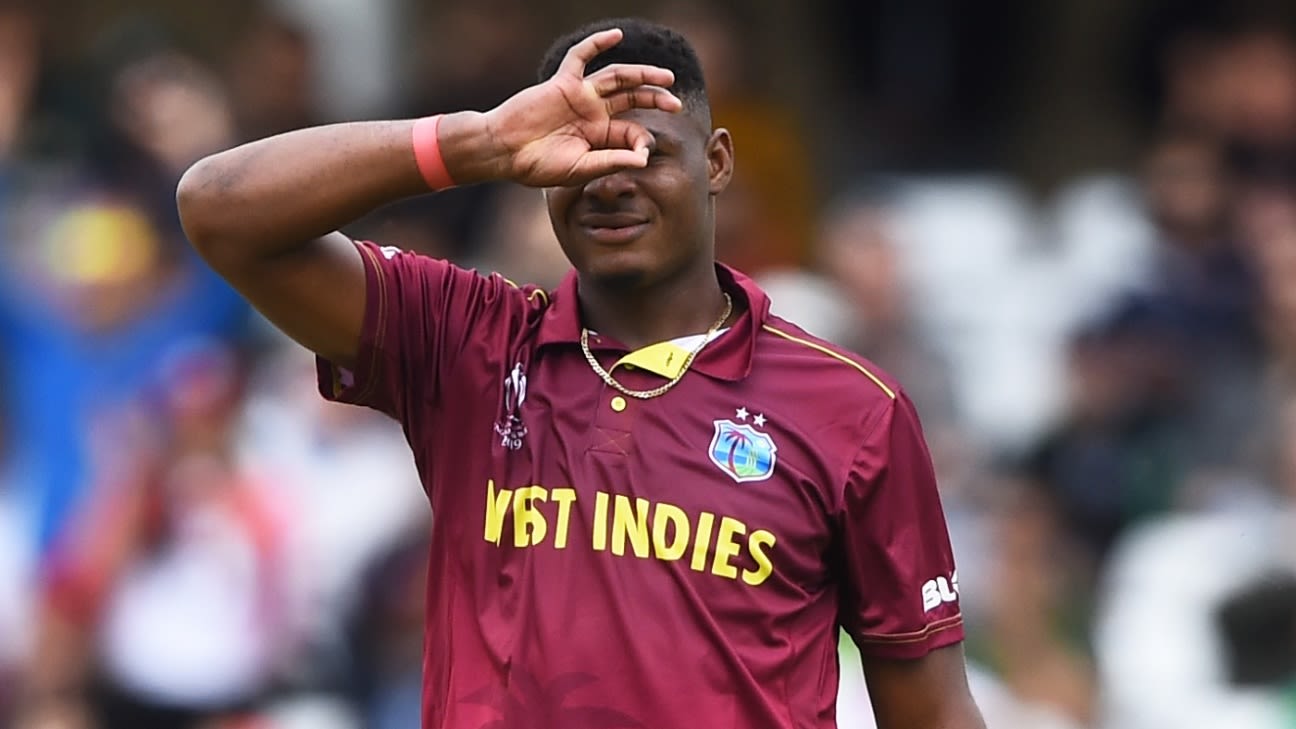 Former West Indies fast bowler Andy Roberts has said that Oshane Thomas will be the first name he will “pencil” in for West Indies’ final Test squad for the three-match series in England, which begins in Southampton from July 8. Speaking to his former West Indies team-mate Michael Holding, Roberts also predicted the young pair of Alzarri Joseph and Chemar Holder could grow to become the “backbone” of West Indies’ fast-bowling attack “within the next five-six years.”

All three fast bowlers are part of the enlarged squad of 25 players that landed in Manchester on June 8. But while Joseph and Holder are part of the 14-man primary squad, Thomas – along with Shannon Gabriel – is part of the 11 reserves.

ALSO READ – Oshane Thomas: ‘Test cricket is what you want to play to be great‘

According to Roberts, Thomas has the most basic skill of fast bowling, which at the same time is also unique: “pace”. Roberts believed that it could be turned into a “weapon” when used wisely.

“Oshane Thomas would probably be the first name I would pencil on this tour because he has what others want: he has pace,” Roberts said in an episode on Holding’s YouTube channel aired on June 20. “And you should always have somebody like that on your team so that he can create uneasiness amongst batsmen.”

Holding himself had said recently he was “a little bit surprised” to not find Thomas amongst the primary Test squad of 14, especially after he had gained prominence as one of the fastest bowlers in the previous year. Thomas has also talked up his desire to make his Test debut because that is the format where “greats” are recognised.

ALSO READ – Thomas interview: ‘When I look in a batsman’s eyes and see fear, it’ll pump me up to bowl even faster‘

The current West Indies fast-bowling contingent is led by Kemar Roach along with captain Jason Holder and Gabriel. However, it is the pool of young fast bowlers like Joseph, Chemar and Thomas that has given the Caribbean selectors renewed hope that West Indies’ pace attack could be built into the sort of formidable unit that was championed once by Roberts and Holding.

He also had a word of advice for the young fast bowlers – he wanted them to use their pace smartly and not let it go to waste. “Alzarri is a good youngster coming up. He has some pace, but I don’t think at the moment he is bowling genuinely fast,” Roberts said. “At the [Under-19] Youth World Cup (2016) I think he was bowling faster than he is now. Maybe if he has some experience and he can bowl within himself and produce the odd fast ball which is required. Because I don’t think anyone should try to bowl every ball at 90 mph. I would like to see the youngsters learn (that).

“If you have a 95 mph ball in your armoury, that is a weapon. And you need to use [that] sparingly. You need to have the batsman just guessing: when is this faster ball going to come? Then there is young Chemar Holder. I saw a bit of him and I think he, to me, along with Alzarri will be the backbone of West Indies fast bowling within the next five or six years. I’m hoping that I don’t talk too soon. But you need to have two genuine fast bowlers who can bowl in pairs.”

Roberts said Roach was a certainty along with Jason to lead the fast-bowling attack. He was unsure whether Chemar would be ready to be blooded on this tour, but felt Thomas could compete with Gabriel for a slot in the team.

“I don’t know how fit Gabriel will be because he hasn’t played since last September,” he said. “And he is not one of the most athletic of our bowlers.”

‘Batting has to come good’

Asked by Holding how West Indies could retain the Wisden Trophy, Roberts said that was possible only by playing “good all-round” cricket. According to him, West Indies’ batting remained a concern especially against the “short” delivery.

“I hear many people are talking now about the strength of the fast bowling unit, but then we cannot forget the bating because we are not playing against ourselves,” Roberts said. “And England, at the moment, have some very good fast bowlers. Along with the two old stagers [Jimmy Anderson and Stuart Broad] they have two youngsters in [Jofra] Archer and [Mark] Wood. We have to be very careful because you know some of our youngsters in the region don’t play the short ball as well as we think they should. And so, first, the batting has to come good on that tour.”

The West Indies selection panel, led by former offspinner Roger Harper, was forced to ring in some last-minute changes after Darren Bravo and Shimron Hetmyer had opted out of the England tour because of health concerns amid the Covid-19 pandemic. Recently Holding had said that it was “unfortunate” for both batsmen especially Bravo, who has struggled to find consistency, to miss out on the England tour.

“If you have a 95 mph ball in your armoury, that is a weapon. And you need to use [that] sparingly. You need to have the batsman just guessing: when is this faster ball going to come?”

Roberts agreed, saying: “They would have played an integral part of the batting. As much as we don’t like the way Hetmyer has been playing, he is one of the batsmen for the future. But somebody has to get into his head and let him realise that you can’t score runs sitting in the pavilion.”

According to Roberts, the challenge for most West Indies batsmen was they “don’t really train and practise enough to work the ball into gaps. We believe in boundaries.”

West Indies coach Phil Simmons had admitted recently that batting was an area that West Indies needed to strengthen to compete in England. Key concern for Simmons would be the form of his two senior batsmen: vice-captain Kraigg Brathwaite and Shai Hope – both of whom were the best batsmen on West Indies’ previous visit to England, which they lost 2-1 after a thrilling victory in the second Test in Leeds.

While Hope has failed to score another ton, after becoming the first batsman to record twin centuries in the same Test at Headingley, Brathwaite has averaged 25.33 in his last 20 Tests.

“If our fast-bowling unit can click then may have some hope, but I am not going to put too much emphasis on our batting,” Roberts said. “Speaking, just by listening, watching and hearing people talk about these batsmen that we have there isn’t much to shout about.”