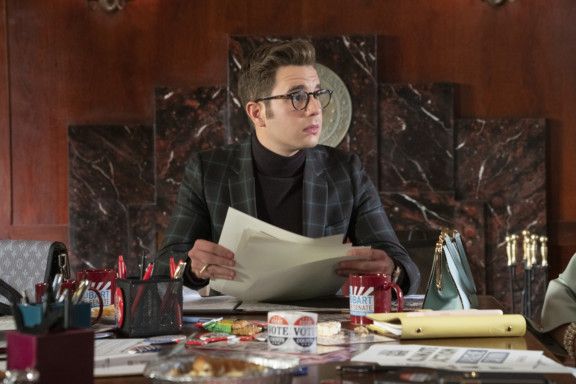 Last year’s polling data on the first season of Ryan Murphy, Brad Falchuk and Ian Brennan’s Netflix series ‘The Politician’ came back somewhat mixed, as it should have.

This cynically satirical series, which charts the political rise-fall-rise cycle of a supremely confident and self-interested young man named Payton Hobart (Ben Platt), takes an all-too-easy theme (politics is corrupt) and stretches it well past its usefulness or comic potential. ‘The Politician’, as the kids says, is a lot.

Owing its tone and stylistic approach to a chaotic blending of Wes Anderson, Tracy Flick and Selina Meyer (and speaking in Murphy and company’s native tongue of speed-sass), ‘The Politician’ has apparently ignored some of the voters’ feedback on Season 1.

The show almost certainly needs fewer characters but has instead added more. And instead of getting some breathing room, the remaining oxygen is spent running in circles for all seven episodes of Season 2 (which premiered June 19 on Netflix). Rather than sharpen its cleverest ideas, it unleashes several more half-thought scandalous subplots, most of which have to do with sex.

It’s a romp, after all — a show about people who’ve lost any semblance of moral compass, which, as TV viewers in the 21st century, we should be plenty used to by now, whether this lack of goodness is personified in dramas, comedies or our actual breaking news.

It’s entirely possible to watch ‘The Politician’ and not know whether its take on politics is meant to be meaningful and relevant or — and this may be the better way to enjoy it — completely and coldly meaningless. ‘The Politician’s’ burn-it-down regard for all politics is a tired stance and a bit off topic in the current moment, which so badly needs a rebuilding of good politics and good people.

Let us fall back, then, to the show’s only sure defense: It’s a comedy.

In that regard, there are plenty of campy pleasures here. After his life veers in a direction he never expected (his dreams of Harvard dashed; his high school political career in tatters), Payton ended up at New York University at the end of Season 1, happily apolitical until his loyal toadies (Laura Dreyfuss and Theo Germaine) convinced him to run against an incumbent state senator, Dede Standish (Judith Light). The second season picks up with that campaign.

There’s no understating the immediate way Light’s presence (along with Bette Midler as Hadassah Gold, Dede’s conniving chief of staff) lifts ‘The Politician’ into a more crackling realm. Payton and his advisers immediately take to New York-style dirty politics, upsetting Dede’s ambitions to join a Texas senator’s presidential ticket. Dede’s personal life is a minefield (as we learned in Season 1), but Payton’s past is also exploitable — such as the photograph of him when he was 6 years old, dressed as Geronimo for Halloween.

“I’ve never met anyone whose enemies take so much pride and pleasure in destroying them,” one of Payton’s staffers observes. “People really hate you.”

Everything that first seemed smart, snarky and on-point about ‘The Politician’ begins to wear thin; the jokes that it makes — as well as the contemporary real-life debacles it lampoons — are too easily made. (The old observation that “This stuff writes itself” also holds true for the binge viewer. Shows like this tend to enjoy themselves, exclusively, as you zone in and out.)

As with last season, ‘The Politician’ is at its best in an episode about the actual voters who exist far outside of the campaign war rooms. Last season, ‘The Voter’ was a deeply apolitical teenage boy who cared little for the school election battles that raged around him — a voter who could not be reached.

This season, ‘The Voter’ episode smartly zeros in on the “OK boomer” divide shaping up between Generation Z voters (whom Payton panders to on climate issues) and their elders (who feel a loyalty to Dede, mainly because they’ve always been loyal to Dede). As Dede herself observes in a moment of bitter clarity: “Since AOC (Alexandria Ocasio-Cortez), no incumbent is safe.”

When at last the show seems exhausted by its own shenanigans, it finds a way to put Platt (the Broadway musical star) behind a barroom piano and have him showtune his lungs out — which only serves to remind the viewer that he’s much better playing a theater kid than he is at playing a politician. Moments of reflection and reckoning are too little, too late; they’re also the show’s clumsiest scenes.

The grand plan, as I understand it, is for ‘The Politician’ to follow Payton for several more seasons on his path to the White House — or as close as he can get to it. If that plan holds, the show could use another rethink. It would be great if its attempt to have a heart could match its disdain for the political process.

‘The Politician’ is available for streaming on Netflix.