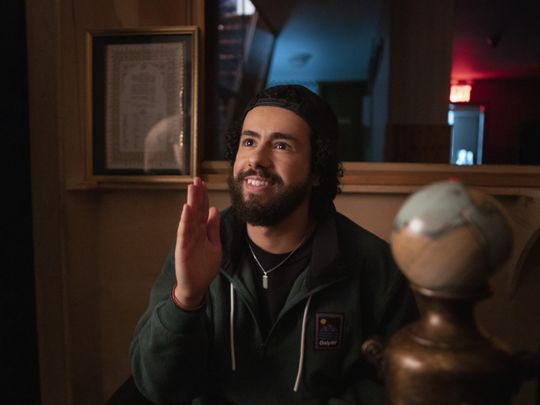 It seems absurd that it took this long to get a show like ‘Ramy’.

For any Arab sitcom watchers who grew up on ‘Seinfeld’ or ‘Friends’, there was always the nagging question of why an Arab character couldn’t be written into the group of buds — an Ahmed here, a Reema there. Or were we destined to only see ourselves as the bad guy in political dramas?

Ramy Youssef, at only 29, has changed the game — his comedy-drama series ‘Ramy’ centres around the modern day Arab-American Muslim experience. It follows Ramy, the son of Egyptian immigrants, around New Jersey. Alongside Youssef, the series stars crossover Egyptian actor Amr Waked as Ramy’s dad, and Palestinian-American comedian Mohammed Amer as best friend Mo.

Available exclusively on OSN Streaming in the UAE, the Hulu series just released its much-awaited second season, welcoming ‘House of Cards’ actor Mahershala Ali into the fold as Sheikh Malik.

Youssef — an Egyptian-American comedian and actor — won a Golden Globe for his performance in season one. But he’s been finding it strange to promote season two at a time of political and social unrest in the United States. Protests against police brutality against the black community continue to bring hundreds to the street.

Shortly before our interview, Youssef made a virtual appearance on ‘Late Night With Seth Meyers’ and asked to bring another guest with him — Patrisse Cullors, co-founder of Black Live Matters and founder of Reform LA Jails.

On one hand, Youssef is aware of the power his show has to humanise Arab Muslims in Hollywood; on another hand, he seems even more conscious of the urgency of what’s going on right outside his door.

We caught up with Youssef over a Zoom call on Wednesday even to discuss season two of ‘Ramy’ — and what it means to be a near singular voice in today’s changing Hollywood landscape.

Good! How are you? Where are you at?

I’m in Dubai right now. Where are you based?

OK, so, we’re at completely different ends of the time zone. Thanks for taking the time to chat to us. Congrats on season two. How are you feeling?

You know, it’s an interesting time to put something out, I think even with quarantine, but then also, what’s happening in the world right now, especially in this country. It’s so amazing. It’s really inspiring to see what everyone’s going through. But definitely in terms of putting a show out, it’s weird. Even for myself, like my own show is second on my mind. But the responses have been wild. It’s been really cool, just how much people are really connecting or feeling things and responding has been awesome.

We have a saying in Arabic that means ‘strike the metal while it’s hot’. Did you feel like, with audiences pushing for more diversity and accountability in Hollywood, this was the right time for a show like ‘Ramy’?

The show is kind of a natural evolution, right? In many ways, there’s gaps that are filled when stories aren’t told. And so it just becomes exciting for something to go in and fill that gap. And do it from people who are actually the thing, right? Like, in terms of this show about Arab Muslims, for it to be made by an Arab Muslim and other Arab Muslims and other Muslims is really important. I think anytime there’s a gap, there’s room. And so, there was obviously a gap, we made this show, and then our show in and of itself creates other gaps, because there are so many facets under the umbrella of Muslim or under the umbrella of even Arab that still need to be told.

When you’re one of very few voices who’s telling the Arab-American story, you have so many eyes on you. Did you feel that kind of pressure? Because, we don’t have 100 stories that we can switch between [on TV], there’s an added sort of responsibility or pressure, maybe?

The thing that I find with my show is I do think, in general, the audience’s kind of in an unfair situation, because when they watch other shows, no one’s like, ‘Well, here’s the white show.’ But there’s something inevitably [that happens] just because of scarcity, but also slightly because of marketing, where it’s just this idea of like, ‘Well, here’s the Muslim show!’ And it’s like, well, it’s not, it doesn’t really [cover] the amount of experiences under that umbrella.

It would have to be a much different show to even try to cover all of those and I don’t know what that show would look like. I don’t even know if you’d be able to follow what was going on. Because it would just be too much to cover. So, that’s an element that’s there. But I don’t really create from that place. Usually I put something out [and] I’m like, ‘Yeah, I know what’s gonna bother people and I know what people are gonna like.’

In Hollywood, you have incredible Arab-American talent and even Egyptian-American talent, whether it’s producers like Sam Esmail [creator of ‘Mr Robot’] or it’s Rami Malek. But we don’t see an increase in Arab characters being written. Meanwhile, you didn’t distance yourself at all with ‘Ramy’: it’s called Ramy and you’re the face of the show; it wasn’t an abstract way of representing. Tell us a little bit about that.

It’s kind of what I always wanted. I moved to LA in 2012 as an actor, and I was acting in things and just kind of getting a taste of the industry and realising, ‘Oh, maybe I can do things here.’ I knew I wanted to tell a story that captured the way I was feeling spiritually [and] elements of my culture. It was just always my priority and it was something that I would talk about … It just became clear that there was a really rich world and point of view that I wanted. Sometimes what ends up happening is when you go to a creative field, your main identity becomes ‘artist’, or your main identity becomes ‘creator’ or ‘actor’ or whatever it might be.

And everything else kind of isn’t as relevant. What happens too is, culturally, the arts are not encouraged to flourish in a lot of our communities … People who do become artists step away from the culture and step away from the faith because they start to feel like they’re incompatible. I felt very lucky that my support system allowed me to exist as just a person who doesn’t have to let go of anything to do something that they want to do.

I’ve spoken to so many actors and even comedians who say, you know, ‘Terrorist No 3’ was the only role that they could get. So, even seeing more casting [of Arab actors], whether it’s for Arab characters or not, it’s still a step forward.

And also, I’m benefiting from a different era, you know? I mean, if I was an actor 20 years ago, I might have been tempted to change my name. I come in an era where it’s almost like, the harder it is to pronounce someone’s name, the cooler. So it’s definitely a different wave and so I’m not gonna act like I single-handedly did something; there’s a different environment. It sits differently, which is really cool.

At the Golden Globes, you decided to start your speech with Allahu Akbar. Can you tell us the reasoning behind that?

Before it, I think I was talking to my family [about], ‘What would you say if you won?’ I really wasn’t thinking I’d win, but I was like, I’d probably say Allahu Akbar because it would be the only thing I could think of in the moment, and so it really came from that place. It was really how I was feeling. Also, there was an element of timing. too, just because, Ricky [Gervais] before it was like, ‘Thank your God.’ In my head. I’m like, ‘Yes, that is what I’m gonna do. That is a hundred per cent what I’m going to do!’ … Even just in a moment like that, I feel like we should be able to express ourselves however we genuinely would. It’s a weaponised word that obviously shouldn’t be.

And just quickly before we go, really important. What’s your favourite Egyptian dish?

Oh, koshari. Come on. It’s not even like [a competition]. Koshari, and then I guess we can get into foul and stuff. But koshari is… come on.

Well, thank you so much. I hope we get to talk for ‘Ramy’ three, four and five, and whatever comes next.

Season 2 of Ramy is streaming now on OSN. “OSN is committed to bringing the best in entertainment to audiences in the Middle East, curating a line-up of content that includes mainstream successes and indie hits,” says Rolla Karam, Vice President of Acquisitions and Head of Arabic Programming at OSN.

“‘Ramy’ season 1, was a huge success with millennial audiences and indicative of the type of content this younger audience demographic wants to watch. We’re sure season 2 will be equally successful and we have plenty more fresh and exciting content in the pipeline.”