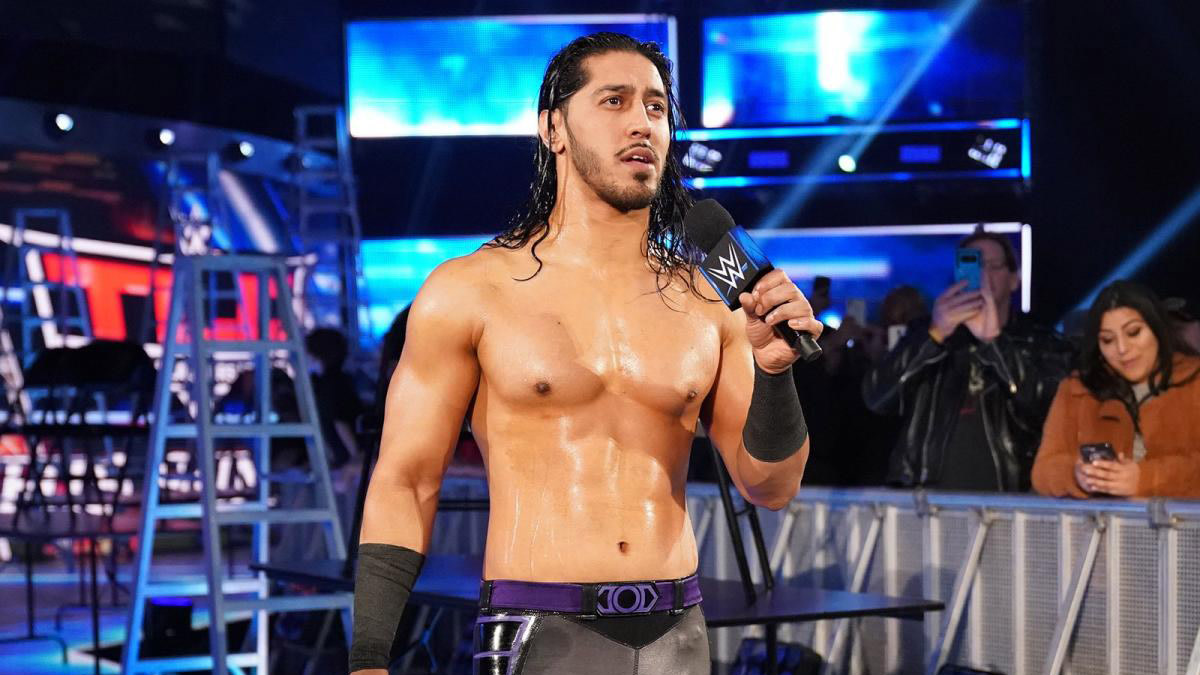 Last weekend, I reached out to Mustafa Ali asking whether he would be willing to speak about the current civil unrest in the nation following the police killing of George Floyd.

“The reason I had declined is, not only is this a sensitive topic, it’s a very important topic and I didn’t feel like I was the right person to speak on the matter,” says Ali. “I was talking to a fellow WWE wrestler, who is Black, about everything that’s going on. He had said that, ‘You face the same thing that we as Black Americans face.’ And I said, ‘No, we don’t. When I drive and I get pulled over, I’m worried about getting a ticket. I’m not worried about getting shot. Ever. So no, we don’t have the same fight. I have a fight. You have a war.’ That’s why I didn’t feel I was the right person to talk about this situation.”

Only hours later, Ali reconnected with a desire to speak out.

“I was talking to some friends about it, and one friend in particular, she said, ‘As long as I’ve known you, you’ve never held back when it comes to telling the truth, why are you doing it now?’” says Ali. “I told her I didn’t feel I was the right person to do it. She said, ‘Any time you have a chance to speak, you have a chance to change someone’s mind. This is a chance to change some people’s minds.’ That really resonated with me. I’m here to tell you what I honestly feel is both the problem and the solution to all of this.”

The 34-year-old Ali, whose name is Adeel Alam, is of Pakistani descent and has spent the majority of his 17-year career redefining what it means to be a Muslim in pro wrestling. Xenophobia has long served as a profitable concept in pro wrestling, pitting red-blooded Americans against the evil foreigners.

But Ali presents an entirely different image. He does not play a bad guy. In fact, Ali embodies the good guy, or babyface in wrestling parlance, portraying a character who is relatable through his hopes, dreams and vulnerabilities, empowering viewers through a quiet determination to overcome obstacles.

Before signing with WWE, Ali served as a police officer for four years with the Homewood Police Department, in the Chicago suburbs. As a former police officer and current WWE star, Ali brings a strong voice to the Black Lives Matter movement.

“As a former police officer, I can look you in the eye and tell you with zero hesitation in my voice that George Floyd was not just killed by the police,” said Ali. “He was murdered by the police.”

Ali’s decision to join the police department stemmed from a desire to create change from within.

“I had joined the police department because I truly believed that, at its core, the police officer profession was a noble one,” says Ali. “To protect and to serve, to lay your life down to protect the innocent. I felt, what could be more noble than that? I was well aware of all the problems that the police department was having with the community, and I was aware that it needed change. I thought the best way to bring change to the police department [was] from within. That’s why I joined.”

Police killings, like those of Floyd and Breonna Taylor, have shone a spotlight on the injustices of police officers who should be protecting their community instead of endangering it. Ali’s experience as part of the police provided close exposure to the inner workings of the criminal justice system, and he believes the problems with the current police system are indicative of the entire structure.

“The system is not designed to help people. It’s designed to hunt people,” says Ali. “The earliest forms of the police department in this country were put together to capture runaway slaves. So the system is doing exactly what it’s meant to do. It’s not here to help anyone, it’s here to hunt them.

“The Black Lives Matter movement isn’t something that happened overnight. It’s not something over one Black man being murdered. This is 400 years of getting shoved and hit and kicked and spit on and murdered and raped, insulted and degraded, and killed. This is 400 years of that. The Black Lives Matter movement is essential to the survival of every Black man and woman in this country. Yeah, there’s going to be that permanent scar there and the only way to really repair that relationship is massive change. And yes, it starts with the police.”

Black Lives Matter is a global human-rights movement working fervently to put a stop to white supremacy and building strength within the communities being attacked by those tasked to protect it. This has spurred protests across the country, rallies for freedom and justice, and a movement to defund the police.

“People are talking about bringing reform to the police department as a potential solution to this crisis, but I’m here to tell you that is not the solution because it’s not the root of the problem,” says Ali. “The criminal justice system is designed to profit off of arresting Black people. Every time I went to court, it was filled with Black people. There was one white guy there for domestic battery, but everyone else was Black and they were arrested for traffic, retail theft, warrants, etc. Every single person, every single month. The entire court room was filled with Black people. The reason is because the criminal justice system profits off arresting people. Look at the private prison industry. It makes millions every year off of what? Arresting, detaining, and putting Black people in custody.

“So when you have a criminal justice system that is designed to profit off of people getting arrested, and when you have a prison industry that is designed to profit off people getting arrested and incarcerated, what are the police going to do? They’re going to arrest people because it’s profitable. So it’s not police reform, it’s not just the criminal justice system, it’s the entire economic structure behind it.

Ali stayed on the force for four years, doing his best to stand up to superior officers and working tirelessly to leave people with a positive, respectful impression of the police. He also witnessed how the system was set up for profit. Even with massive police reform, true change will still not occur without a shift in the entire structure. Reconstructing the entire criminal system will take a committed effort over time, but Ali also offered hope for immediate change.

“Usually when you’re asking for immediate change, you’re asking for too much,” says Ali. “But how much more time do you need? Black brothers and sisters have been dying from racism and bigotry for over 400 years, so I think enough time has passed and we can implement some change. Some things that you can do to help empower yourself to bring that immediate change is to work with your local governments, your mayor, and even your chief of police and implement a community-led review board that reviews all cases of excessive force. Everything from the incident, to the repercussions and punishment, everything should be led by this community board. Why in the world would we ever allow the police department to review and investigate [this] stuff? It makes no sense. That’s something you can do immediately that will bring immediate change.”

When given the opportunity, Ali is willing to share his perspective on camera in WWE to support the fight against bigotry, racism, and oppression.

“WWE’s primary purpose is to entertain, but I believe, given this huge platform we have, our responsibility is to also educate,” said Ali. “I’m proud of the fact that when I’ve had the opportunity to educate and speak on matters such as this, I have. I’ve dropped lines in promos where I’ve said, ‘I’ve seen evil amongst the people that I’ve swore to protect and serve, and I’ve also seen evil amongst those that have sworn to serve and protect.’ Anything we can do to get people thinking, get people away from what they routinely believe, is key. Any time I have an opportunity to challenge the narrative or educate, I’m going to do it.

“The way I’m using my presence as a WWE superstar to help combat bigotry is my mere presence on screen, with the name Mustafa Ali as a form of protest. We as a society like to live in this little box where we try to fit everyone inside this box. If you’re a Black person, you’re a thug. If you’re Middle Eastern, you’re a terrorist. They want to put us inside this box, [but I am] just refusing to live inside that box and be outside that box, refusing to conform in any way. Making them uncomfortable with that is my way of protest, my way of combating bigotry. And I’ll proudly continue to do it.”

No person is born with hatred. Racism is taught and learned, and it has been an ugly element in the United States since its creation in 1776. But Ali hopes his words will change someone’s stance on race and open up their mind to a different perspective.

“Listen, I know there is a lot of anger and angst and fear and hatred going on in this country right now,” said Ali. “I want you to acknowledge it and accept it. That is what’s going to allow us to change. The system that is in play right now prioritizes profit over people. That’s what our current system does right now. The police department, the criminal justice department, it prioritizes arresting people so that they can have a profit. It’s as simple as that.