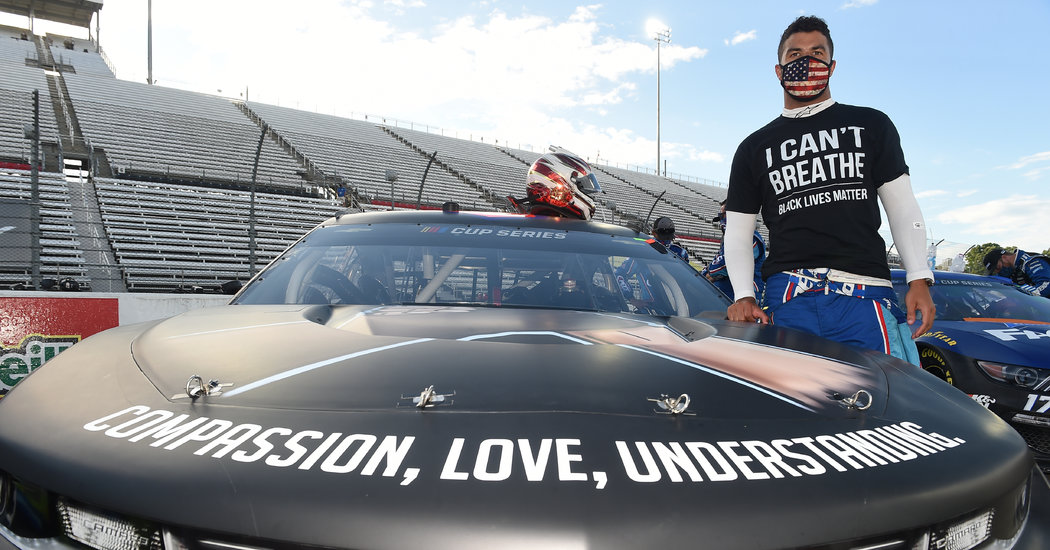 Bubba Wallace, who instigated NASCAR’s banning of the Confederate flag, is the racing series’ only black driver. That has put him in the spotlight in a sport whose owners, drivers, crews and fans have historically been predominantly white.

What is the history of black drivers in NASCAR?

Wendell Scott was the pioneer, driving on the circuit from 1961 to 1973. Despite regularly facing discrimination, he won a race in 1963 in Jacksonville, Fla., that remains the only one at NASCAR’s top level to be won by an African-American driver. Scott died in 1990.

Although a handful of African-American drivers got into a race or two over the years since, no other black driver had a full-time ride in NASCAR’s top series until Wallace.

How did Wallace get his start?

Darrell Wallace Jr., 26, was born in Alabama and grew up in North Carolina. Like many professional drivers, he started at a young age, beginning racing at 9.

Wallace became involved in NASCAR’s Drive for Diversity program, which seeks to recruit female drivers and drivers from minority groups. At 17, racing in a lower tier, he became the first African-American to win a rookie of the year award in a NASCAR series.

In 2012, he got his first race in NASCAR’s second-tier series, finishing seventh over all in 2015. He debuted in the truck-racing series in 2013 and placed third over all in 2014. He had six race wins in the truck series, the first NASCAR wins at so high a level for any African-American driver since Scott.

How has his top-flight NASCAR career gone?

In 2017 he replaced an injured driver in the No. 43 car, made famous by the NASCAR legend Richard Petty. It was the first appearance by an African-American racer in NASCAR’s top circuit since 2006. The next year he took over the 43 car full time.

Wallace placed 28th over all in each of his two full years on the circuit. His best race finishes both came in high-profile races: a second place at the Daytona 500 in 2018 and a third in the Brickyard 400 in 2019.

What was his role in the flag decision?

Wallace’s activism this past week brought fast action. Before a race in Atlanta on Sunday, he wore a shirt reading “I Can’t Breathe. Black Lives Matter,” along with an American flag face mask. On Monday he called for the removal of the Confederate flag from NASCAR events. The racing organization had started asking fans to stop bringing the flag to races in 2015, but many ignored the request, and flags were often seen on T-shirts and hats, at tailgates, and flying from cars and trucks in the infield.

On Tuesday, Wallace and his team revealed a new paint scheme for the storied 43 car, all black, with a “Black Lives Matter” message on the side and a picture of white and black hands entwined on the hood.

Just before the newly painted car’s debut in Wednesday’s race at Martinsville, Va., NASCAR announced the decision to bar the Confederate flag at events. Wallace finished 11th in the race.

“That’s a symbol of hate, and it brings back so many bad memories,” Wallace said of the Confederate flag on “Good Morning America” on Thursday. “There’s no good that comes with that flag, and that’s the message we’re trying to get across.”

What else has he been up to lately?

Wallace was involved in a brief contretemps last month during NASCAR’s coronavirus hiatus when drivers were participating in virtual races. Wallace quit a race in the middle, and said he didn’t take the racing seriously. After being criticized by some fans, Wallace tweeted, “I ruined so many people’s day by quitting … a video game. Bahaha.”

One of his sponsors for the virtual race series, Blue Emu, a pain reliever, said it would drop him, and tweeted out a video of President Trump from “The Apprentice” saying, “You’re fired.”

Wallace appeared to faint during an interview after last Sunday’s race in Atlanta, but said later he was fine.

What’s next for Bubba Wallace?

Wallace races again on Sunday in Miami. He currently stands in 20th in the standings through 11 races.