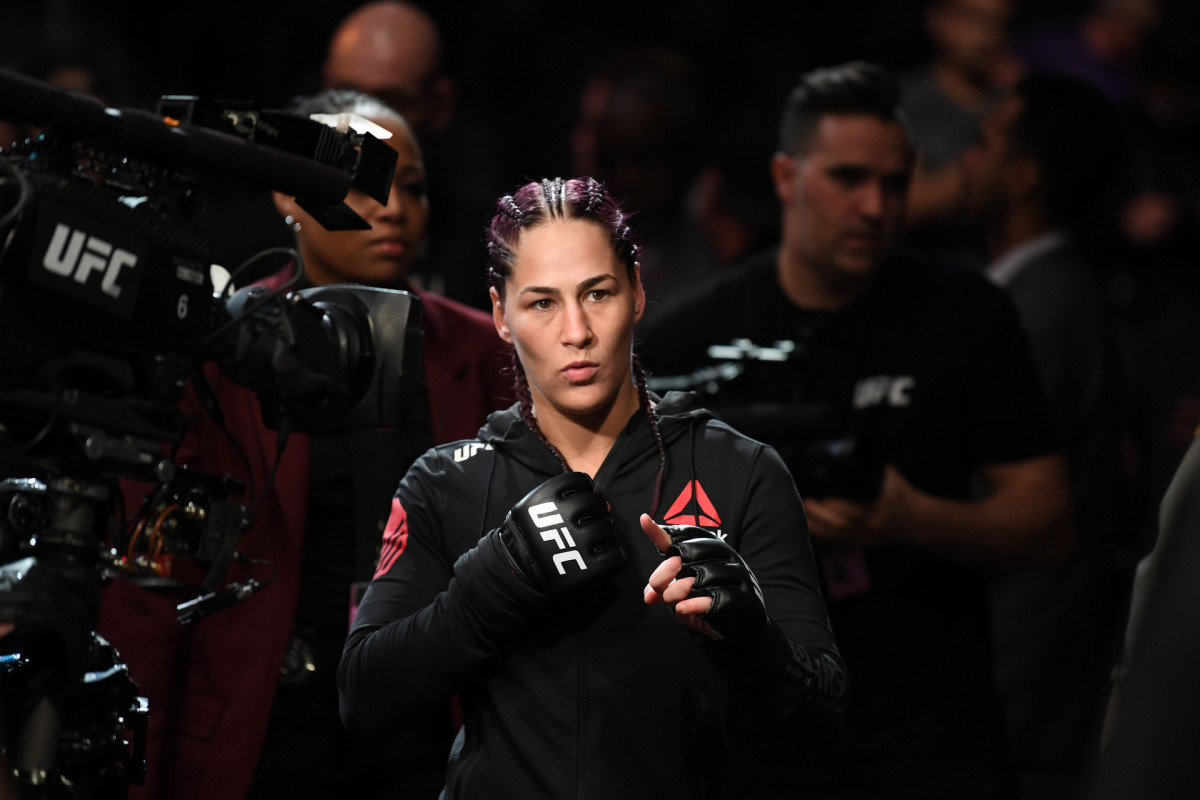 In just a couple more weeks, we head to the much anticipated “Fight Island,” where the UFC will host four events live from Yas Island in Abu Dhabi. The cards are already being announced, one of which includes UFC 251, which will feature not one, not two, but three title fights just on this one card alone.

Before we get too excited about the marathon on deck, we have fights to watch live from the UFC APEX in Las Vegas Saturday night! In the main event, No. 10 Cynthia Calvillo (8-1-1) will move up a weight class and take on former title challenger, and No. 1 ranked flyweight Jessica Eye (15-7). This is a match that experienced some scrutiny by being billed as a main event. Expect the ladies to bring some excitement though, as Eye looks for back-to-back wins in the octagon, but to do so, she must fend off the prospect Calvillo, who, as mentioned, will move up to the flyweight division for the first time in her pro career.

Small cage again, and you know what that means! Tons of action, along with the probability of more finishes than the norm.

The card gets underway at 6 pm ET and is scheduled for 11 matches in total, which will air live on ESPN/ESPN+ for the entire card.

Jessica Eye looks to continue the momentum as she welcomes Cynthia Calvillo to the women’s flyweight division Saturday night.

When it comes to Jessica Eye, unfortunately, the first thing that comes to mind for many is her wearing a bulletproof vest at faceoffs, only to be slept by Valentina “Bullet” Shevchenko the next evening. Eye had been on a three-fight win streak until that nasty head kick put the breaks on her run. She followed up the loss with a decisive victory over Viviane Araujo last December, and will now look to make it two in a row against the prospect Cynthia Calvillo. Calvillo, who’s had some inconsistency making weight at 115, moves up to flyweight to take on the former title contender in the night’s main event. Oddsmakers have the match up almost a pick-em, and in my opinion rightfully so. I believe eliminating the tough cut to 115 will only help the crafty Calvillo. This test will validate if she can be a contender in the division moving forward, or if she should re-evaluate a move back to 115.

Eye has faced more notable names (Tate, Correia, Kaufmann, McMann, Shevchenko) and has the experience in the main event spot, coupled with the size advantage. That said, on the feet, the two fighters will be both very active trading shots, with Eye the more technical, which will eventually cause Calvillo to look for the takedowns. This will be an advantage for Calvillo, and a chance to lock in a submission attempt or two if she can weather the size disparity. Eye weighed in at 126.25, just a ¼ pound over the limit, yet vocalized that she was done cutting and didn’t even think she could stand. With a fresh Calvillo at this new weight class, and her ability to display some of her craftiness on the mat and five rounds to work, I’ll take a shot with the smaller fighter moving up, in what would be the biggest win of her career.

Other Wagers to Consider

Marvin Vettori has been chomping at the bit for this match up. This matchup has already been canceled twice in the past, once due to the pandemic, and then most recently in May, as Roberson fell ill after the weight cut. Friday morning, Vettori was the first fighter on the scale, ready to go, and just 10 minutes into the weigh-ins, Roberson came out to weigh in 4.5 lbs over the limit. An obvious tell that Roberson wouldn’t be cutting weight utilizing the weigh-in window. Expect Vettori to be even more heated than he already was back in May, when the two almost came to blows in the hotel lobby, after Roberson withdrew. As long as Vettori can keep his emotions in check, he should cruise.

Loser leaves town match? The loser could be seeing a pink slip after this one. Espinosa is the much better athlete and will have the wrestling advantage, along with power on the feet. As long as he can avoid the submissions, Espinosa should be able to take at least two of the three rounds and get back on track.

A narrative for DFS players to consider going into his card is the UFC’s decision to roll with the use of its smaller, 25′ octagon at the APEX, instead of the standard 30′ cage. The use of the smaller octagon has historically increased fight finish rates, and shortened average fight times, due to the ability to create more action and engagement between the two fighters.

As mentioned in the tip sheet above, here’s my MMA DFS Heat Chart for UFC Fight Night. As you can see, the chart is ranked based on fight finish odds. Fight finishes are where the points are in MMA DFS. Take a glance at the stack, and we will break down the individual matchups below.

Two key offensive metrics are strikes and takedowns. They get off on their opponents and watch your points rack up quickly. Here’s my Offensive Output Meter for the card. With this chart, you can compare historical fighter averages in these two key metrics as I rank all fighters participating Saturday.