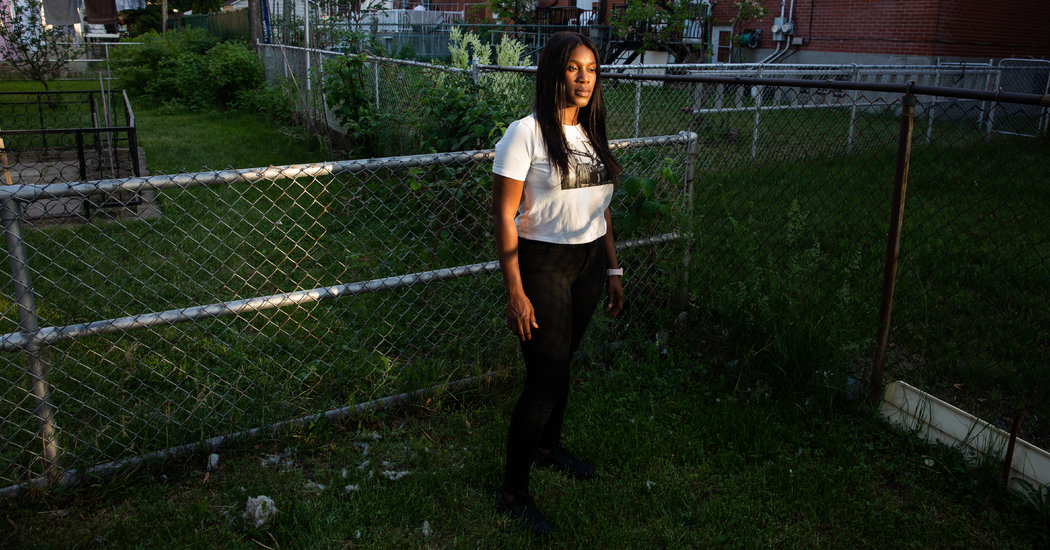 MONTREAL — Sterly Lucien, a Haitian orderly in a Quebec nursing home, has had sleepless nights for two years, fearful that she and her young son could be deported at anytime. But the 30-year old may find reprieve from an unlikely source: the deadly coronavirus.

Ms. Lucien, who fell ill with the virus in April and infected her 2-year-old son, is one of an estimated 1,500 Haitian asylum-seekers working as orderlies in Quebec’s overstretched nursing homes.

This week, Canadian immigration officials said the federal government may allow such caregivers to essentially jump the immigration queue and remain in the country permanently because of the outsized contributions they are making to fight the pandemic.

“There are extraordinary people doing heroic work in our long-term care centers and we must look at how we can help them,” said Kevin Lemkay, spokesman for Canada’s immigration ministry.

Even the right-leaning provincial government of Quebec — which came to power two years ago pledging to cut immigration each year by 20 percent — has said it would consider the cases of individual migrant caregivers under a provincial program, although it refused to debate a broader legislative motion supporting permanent residency for caregivers.

Catherine Fournier, an independent member of the Quebec National Assembly, had introduced that motion. She said the pandemic had altered the public debate by “giving the issue of asylum-seekers a human face.”

At a time of a global uprising against the mistreatment of black people, the issue of how to treat asylum seekers working in nursing homes has also become bound up with questions of race and social inequality. Many of the workers in Quebec nursing homes, for example, are black and from Haiti, among the poorest and least developed countries in the world.

“We deserve to remain in Canada because we are putting our lives on the line every day to save others,” said Ms. Lucien, who entered Quebec from the United States without immigration papers in 2018, and hopes to pursue a nursing career.

Still, the path is not certain for Ms. Lucien. The details of the federal government plan are unclear although officials said it would likely include orderlies and possibly security guards in the health care sector.

And in Quebec, François Legault, the premier, has said that special consideration for migrant caregivers does not constitute an open door for refugees generally.

“We have to be careful,” he said. “I don’t want to send the message that in the future we will accept everybody if they find a job in Quebec.”

Like nursing homes across the world, Canadian care centers have suffered staggering mortality rates and acute staff shortages, with recent reports detailing worrisome conditions including the use of unsanitized equipment, and accusations of neglect and abuse of elderly patients.

Both Quebec and Ontario, the most populous provinces, asked the Canadian military to intervene.

The coronavirus has infected more than 97,000 Canadians and killed nearly 8,000, with more than 80 percent of the deaths in nursing homes.

Many of those working in those homes are, like Ms. Lucien, asylum-seekers or immigrants.

And like her, many of them entered Canada in recent years from the United States, bypassing the official border to benefit from a loophole in a treaty that allows migrants to make refugee claims in Canada if they did not arrive at legal ports of entry.

Upon entry, they receive a work permit, a monthly stipend of about $650 Canadian dollars and access to free health care. But they have to wait — sometimes for years — to find out whether they can stay.

This weekend, a thousand people marched in Montreal in the multicultural neighborhood where Prime Minister Justin Trudeau has his office to demand that migrants risking their lives in Canada be given refuge.

One group clutched a Haitian flag. One man held a sign saying: “I died to save your parents” — an allusion to Marcelin François, a Haitian orderly who died from the coronavirus after working in several Quebec nursing homes.

Stephanie Sherly Barthelmy, 26, another Haitian asylum-seeker who contracted the virus while working as a nursing home orderly, said she was exasperated that the Quebec government recently pledged to hire and train 10,000 new orderlies for its embattled nursing homes at an annual salary of about $50,000.

That is nearly twice her current salary but only Canadian citizens or permanent residents are eligible.

Immigration advocates say the wages of asylum-seeking caregivers are typically lower than their unionized counterparts — as low as $13 an hour compared with more than $20.

“They are happy to hire us when we are cheap labor,” Ms. Barthelmy said. “I am black and the events in the U.S. are touching me, because we, too, face discrimination.”

In April, Montreal police began a criminal investigation after it emerged that more than thirty-one people at that time had died at Montreal’s Résidence Herron nursing home — including five from confirmed cases of coronavirus — after staff abandoned hungry and gravely ill patients.

Public sympathy for migrant caregivers gathered force two months ago after news of the death of Mr. François, the 40-year old Haitian orderly, who died from the coronavirus in his wife’s arms, leaving her with three young children.

Mr. François worked as a fork lift operator at a factory during the week and as an orderly on weekends.

Frantz André, an immigration advocate counseling Mr. François’ family, said Mr. François had reported for work even after he had a sore throat and problems breathing.

“He worked seven days a week to support his family and wanted to show that he deserved to be here,” he said.

Like many Haitian asylum-seekers, Mr. François lived with his family in Montreal North, an immigrant neighborhood that is among the poorest in Canada. More than half of coronavirus cases in Canada are in Quebec; Montreal is the pandemic’s epicenter. The rate of infection in Montreal North is more than 10 times the national rate.

On a recent day there, the sound of Creole could be heard wafting from the windows of cramped and crowded apartments. Every day, minivans run by temporary worker agencies pick up groups of Haitian migrant workers in the area, before fanning out to virus-hit nursing homes on the outskirts of the city.

Mr. André attributed the high infection rate in Montreal North to the rotation of migrants through different coronavirus wards, often with inadequate protective equipment. Also, he said, social distancing was difficult on the work minivans.

Ms. Lucien, the Haitian orderly, also lives in Montreal North with her son. She suspects she caught the virus after being given a shoddy protective mask. She recalled that in April, her son, Reuben, came down with a nose bleed and stopped eating. After both tested positive for coronavirus, they spent weeks recovering.

She said working as an orderly was grueling — she risked illness, fed patients, changed diapers, washed floors — but it gave her a sense of purpose. “These are elderly people who really need help,” she said.

Her journey to Canada took root three years ago after she and her then husband, a surgeon, left Porte-au-Prince after she said they were repeatedly targeted by armed gangs.

She has been in limbo for two years and hopes Canada lets her stay so she can become a nurse.

“I want to do something with my life,” she said.