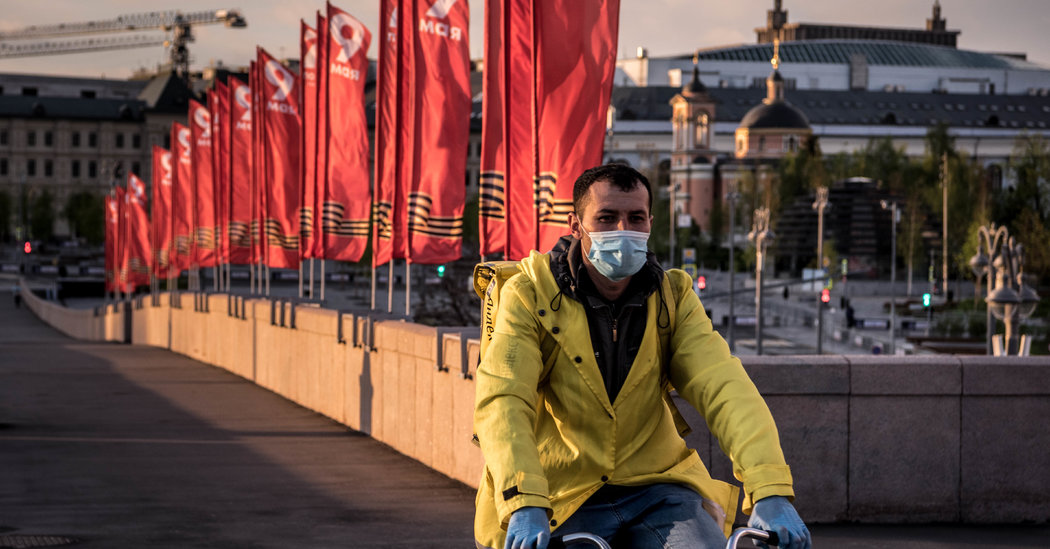 MOSCOW — When President Vladimir V. Putin ordered Russia’s annual military parade to be rescheduled for later this month, he cast it as a sign of life returning to normal in his virus-stricken nation.

But when a Muscovite named Zoya asked the capital city’s mayor, Sergei S. Sobyanin, on state TV this week about planned events for the day of the parade, he told her bluntly to stay home.

“Zoya, I would not recommend you go anywhere,” Mr. Sobyanin said.

The Kremlin is scrambling to drum up feel-good patriotism ahead of a delayed nationwide referendum that would allow Mr. Putin to stay in office until 2036. But the virus keeps getting in the way, with Mr. Putin struggling to solve Russia’s biggest domestic crisis in decades even as he casts himself as a tough problem-solver who is in control of events.

“He is, of course, a dictator,” said Andrei V. Kolesnikov, head of the domestic politics program at the Carnegie Moscow Center think tank. “But here he is a paper dictator.”

Mr. Putin’s approval rating has already slumped to a 20-year low of 59 percent amid public demands that the government do more to help people hurt by two months of lockdown. A muddled message over military parades — and what sorts of gatherings are and are not allowed as the virus continues to spread — could further harm his standing.

At least 12 Russian cities have said they won’t allow parades on June 24, the day that Mr. Putin decreed Russia would hold postponed festivities marking the 75th anniversary of the Soviet Union’s victory over the Nazis in World War II.

In Moscow, where the country’s main parade is still on, city authorities are signaling they will try to arrange the event without the usual throngs of residents pushing up against barricades to watch intercontinental ballistic missile launchers roll by.

Typically celebrated on May 9, Victory Day is Russia’s most revered holiday, and Mr. Putin has long used his perch overseeing the martial pageantry to cement his image as the commander-in-chief who rebuilt the country as a great power.

This year, Victory Day was supposed to be especially grand, and it would have given Mr. Putin a platform to celebrate a constitutional overhaul prolonging his ability to rule Russia by two six-year presidential terms. But the pandemic upended all that.

Mr. Putin postponed the referendum to approve the constitutional changes to July 1 from April. He spent much of the spring governing by video conference from his country residence — critics called it his “bunker” — as Russia struggled with one of the world’s biggest outbreaks of the virus.

The rescheduled parades, then, appeared timed to give Russians something to celebrate just before the referendum. While the July 1 vote is sure to pass — many critics of Mr. Putin plan to boycott it — a strong turnout would give the president a fresh boost of legitimacy as he enters the third decade of his rule.

But now the delayed Victory Day celebrations are emerging as a test of Mr. Putin’s claim that Russia has overcome the worst of the coronavirus pandemic — and they are looming as potentially new vectors of the disease. The result is a rare clash in tone between Mr. Putin, who is emphasizing a return to normalcy, and regional leaders, who are saying in increasing numbers that the virus remains so dangerous that it would be wrong to draw crowds to a parade.

“We decided not to risk people’s health and, most importantly, the health of our dear veterans,” Mikhail Vedernikov, the governor of Pskov region in western Russia, posted on Instagram on Wednesday.

It was too soon for the elderly to take part in public events, and holding the parade without veterans would “contradict the very spirit” of the holiday, he wrote. As a result, Pskov’s Victory Day parade is postponed indefinitely.

Other cities that postponed or rejected plans for a parade in recent days include Tver and Yaroslavl, north of Moscow; Kursk and Belgorod in the southwest; Ulyanovsk, Saransk and Naberezhniye Chelny in central Russia; Perm and Nizhny Tagil in the Urals; Tomsk in Siberia; and Petropavlovsk-Kamchatsky in the Far East.

“We will hold the parade another time, when the situation becomes more clear and the threat is either minimized or goes away entirely,” Igor Rudenya, governor of Tver region, said Thursday.

In Moscow, the parade is going ahead despite the concerns of Mr. Sobyanin, the mayor, that the virus remains a risk in the dense capital of 13 million people. The city started lifting its lockdown over the last week in a three-phase process slated to end on June 23, the day before the parade — a timetable that critics said was dictated by the political calendar rather than by the disease.

On May 26, when Mr. Putin announced the rescheduled date of the parade, he said it would be safe to go ahead because the coronavirus situation “remains stable” in the country. But the pandemic continues to spread, especially outside the capital, which bore the initial brunt of the disease.

What has remained stable is the rapid growth of infections — about 9,000 new cases detected per day, a figure that has changed little in more than three weeks. The government reported 8,987 new cases on Friday, including 7,273 outside Moscow.

In all, Russia’s more than 510,000 confirmed infections is the third-highest in the world, after the United States and Brazil, and its official death toll, over 6,700, is widely seen as an undercount.

But Mr. Putin keeps signaling that it is time to get back to normal. He held his first public event in weeks on Friday, an outdoor awards ceremony in Moscow marking a national holiday known as Russia Day. Television images showed him chatting casually with the award recipients, and only one person in the group — a doctor — could be seen wearing a mask.

Across Russia, at least two dozen cities are still expected to hold parades on June 24. The 14,000 service members marching in Moscow are being tested three times a week for the coronavirus, the Defense Ministry’s official newspaper reported. At least 12 foreign leaders, mainly from former Soviet countries, will attend, Sergei V. Lavrov, the foreign minister, said.

In a televised security council meeting on Thursday, the defense minister, Sergei K. Shoigu, promised Mr. Putin, “Everything will be ready for the parade, Vladimir Vladimirovich.”