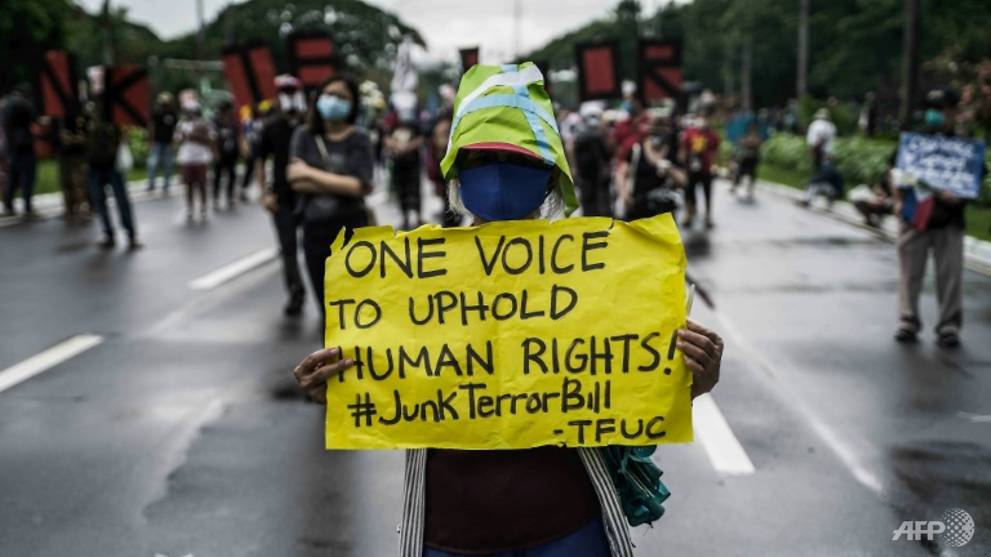 The Bill, which has been approved by Congress and is expected to be signed into law by Duterte, would create a council of presidential appointees that could order warrantless arrests of people it deems are terrorists.

It also allows for weeks of detention without charge.

Activists fear the legislation could open the door to a crackdown on Duterte’s opponents.

“They (authorities) shouldn’t fool us that this terror Bill is for terrorists. It’s for all of us,” said Neri Colmenares, an activist and lawyer.

Groups such as the kidnap-for-ransom gang Abu Sayyaf would continue killing regardless of the legislation, Colmenares told protesters who had ignored police warnings they were breaching COVID-19 restrictions.

Protester Ana Celestial said she feared the Bill would be the “death of democracy for all of us”.

The legislation defines terrorism as intending to cause death or injury, damage government or private property or use weapons of mass destruction to “spread a message of fear” or intimidate the government.

Suspects could be held up to 24 days without charge in violation of a three-day limit in the Constitution, said rights group National Union of Peoples’ Lawyers (NUPL).

The vague wording of the Bill gives “almost absolute power to designate – even wrongly, mistakenly or maliciously – groups as ‘terrorists'”, NUPL said.

READ: Facebook says no proof of malicious acts by fake accounts in Philippines

The United Nations’ human rights office has also criticised the legislation, saying in a recent report that it “dilutes human rights safeguards”.

But government officials say the alarm is overblown, citing provisions that exempt “advocacy, protest, dissent, stoppage of work … not intended to cause death or serious physical harm”.

Authorities argue the Philippines needs additional powers to battle the multiple armed groups that regularly carry out attacks on police and civilians.

However, watchdogs note that on top of granting new powers to authorities, the legislation also strips away old safeguards.

The Act would do away with penalties against law enforcement agents of up to US$10,000 for every day a suspect was found to have been wrongfully detained, Human Rights Watch said.