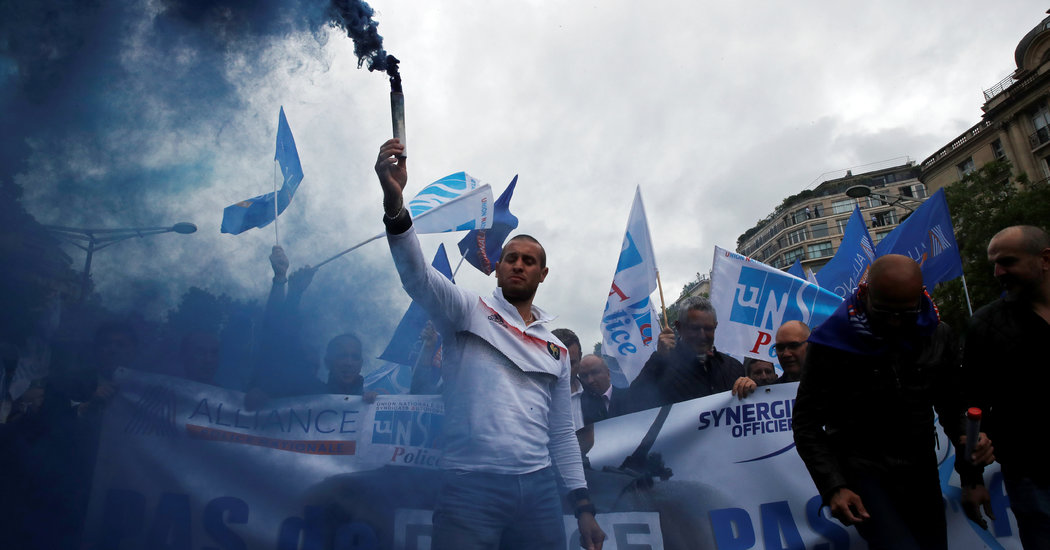 PARIS — The French police, furious at a popular backlash against them in the wake of the George Floyd killing, have pushed back against government attempts to change their practices and discipline officers suspected of racism, demonstrating Friday in Paris and throwing down handcuffs in front of police stations all over France.

There were also signs on Friday that the government of President Emmanuel Macron might backtrack, as the interior minister met hurriedly all afternoon with police unions to quell the storm of anger.

The police protests, coming on the heels of 10 days of much larger demonstrations in France and across Europe after Mr. Floyd’s killing, have placed Mr. Macron in an especially difficult position.

The tens of thousands of French who turned out to demonstrate in solidarity with American protesters have also demanded that the government address a long history of policing that they say unfairly targets minorities, resulting in harassment, racial profiling, disproportionate arrests and unjustified deaths during confrontations and in detention.

If the government backs down, it would be a slap to the broad protest movement that has arisen here in the wake of the killing of Mr. Floyd across the Atlantic.

But the balance of forces appears to favor the police. Mr. Macron, even more than most presidents before him, is susceptible to pressure from the police — in France, national rather than local — who have protected his government staunchly during the violent social upheavals that have marked his tenure.

At the behest of the government, the police clashed for months with Yellow Vest protesters, quelling unrest that frightened Mr. Macron’s centrist base with batons and rubber bullets.

The police turned out during weeks of protest over Mr. Macron’s effort to change the French pension system. And they enforced the strict lockdown he ordered during the Covid-19 epidemic, handing out thousands of fines to citizens who violated it.

On Friday, police union officials, leaving the meeting with the interior minister, Christophe Castaner, said on French television that he had offered them “explanations” and apologies for “communications errors.”

The police were already declaring victory. “We have won something, and lost nothing,” Yves Lefebvre, secretary general of Unité SGP Police Force Ouvrière, France’s main police union, said in a telephone interview after meetings with the minister.

He said the government appeared ready to soften key provisions on potential punishment of police racism and the banning of chokeholds during arrests. The technique has become emblematic of complaints about the use of excessive force by officers.

Racist discrimination by the French police, a mostly white force, has been amply shown in studies, including one by the government’s own human rights watchdog, in court decisions and in numerous violent incidents recorded on video by citizens, especially in the suburbs where many immigrants live.

Last year’s hit film “Les Miserables,” an Oscar nominee centered around police violence in the suburbs, was applauded by residents for its accuracy.

On Monday the interior minister, Mr. Castaner, a close ally of Mr. Macron, proposed punishing any officer guilty of “proven suspicions of racism,” an ambiguous formula that infuriated the police, who took it to mean officers could be suspended on mere suspicions. He added that there would be “zero tolerance” for police racism.

He was careful to absolve the force as a whole of the accusations of systemic racism that have come from rights groups, lawyers and individuals. And he insisted that the police are a “republican” institution in France. Only a few “black sheep,” he said, sullied the national police with racism.

Mr. Castaner is popularly known as “France’s top cop,” in the French media and elsewhere, an appellation never disputed by interior ministers, who have titular authority over the national police force. Critics say the informal title means a French interior minister is too close to the force to ever enact true reforms.

Through months of citizen accusations of excessive force, well-publicized stories of serious injuries inflicted on protesters during the Yellow Vest movement, and more recently the racism accusations, the government had stood by the police.

“The unions and the police are used to very protective language from Christophe Castaner,” said Mathieu Zagrodzki, a police expert at the University of Versailles. “All through the Yellow Vest crisis, he said, the violence came from the protesters, not the police. Now, there’s a complete change in the discourse.”

But the suggestion of even mild change has stung and angered the police force — especially the proposal to ban the chokehold.

Cédric Chouviat, a delivery driver, died in January shortly after a police stop that escalated, during which officers pinned him to the ground and, according to one witness, put him in a stranglehold.

The police pushed back. “We want the government to support the police, morally and materially, and to stop making us the bad guy, said Philippe Capon, a leading police union official, in a telephone interview. “We’ve got to be able to work with confidence,” he said. “The government suggests that we’re racist, but we think we do our work well. “Sure we have problems. There’s no intervention without risk.”

“Look, we’ve been heavily used by the government,” Mr. Capon said. “They’ve asked us to step in, over and over. Each time, we’ve responded, ‘Present.’’’

Analysts suggested that Mr. Macron’s government was as unlikely as previous governments to win a fight with the police over reform, the global anti-racism context notwithstanding.

“What’s certain is that the executive authority is not in a position to reform the police against its will,” said Emmanuel Blanchard, a historian of the police at the University of Versailles. “We’ve got a weak political power that needs to be protected against its own social movements. The police think the government owes it a lot.”

“The government was forced to repress these social movements, for months and months,” said Mr. Blanchard, author of a notable study of boisterous 1958 police demonstrations that helped to bring down the French Fourth Republic.

“In the long history of the French police, the police are in service to the state, not the citizen,” said Mr. Blanchard. “They are impermeable to social reforms. And as ‘France’s top cop,’ the interior minister becomes a mere ventriloquist for the police, and can’t really reform.”