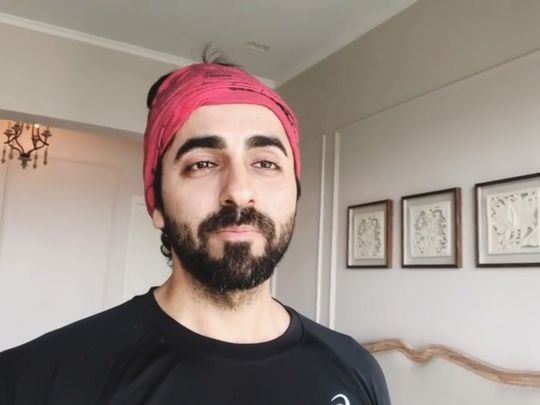 Actor Ayushmann Khurrana has penned a note on how his Gulabo Sitabo’ co-star, the veteran Amitabh Bachchan, has inspired him.

In his note, Khurrana recounts his first impression of seeing the superstar on the big screen. “Whenever a young person in our country wants to step into the field of acting, his goal is Amitabh Bachchan. There was a dialogue in my last film that ‘Bachchan can’t be made, you are just born Bachchan’.

“As a child when I saw ‘Hum’ in Neelam cinema of Chandigarh and saw the big Bachchan on the big screen, I felt such a surge of energy and that’s when I decided I would be an actor,” Khurrana wrote in Hindi.

“My first TV shoot was done in Mukesh Mills and this was the place where ‘Jumma chumma de de’ from ‘Hum’ was shot! It gave me the ‘I have arrived’ feeling. If this was the situation back then, you might be thinking what feeling I must be going through today!” he added, about working with Bachchan in the Shoojit Sircar directorial.

Ayushmann thanks his mentor Shoojit for uniting him with the thespian.

“In ‘Gulabo Sitabo’, this celebrity stood before me as a ‘co’ artist and the attitude of our characters in the film was such that we had to ‘endure’ each other a lot. In reality, I cannot say anything to such a big star like him.

“I would like to thank Shoojit Da for this amazing experience, for showing me in the same frame with a superhero like Amitabh Bachchan. You are my Guru, I have reached here holding your hand!” he added.

In ‘Gulabo Sitabo’, scripted by Juhi Chaturvedi, the actor plays Mirza, landlord of an old dilapidated ‘haveli’ in the heart of Lucknow, named Fatima Mahal, while Khurrana is his shrewd tenant, Baankey. Their situation is akin to that of Tom and Jerry, with witty banter adding to the quirk factor of the script.