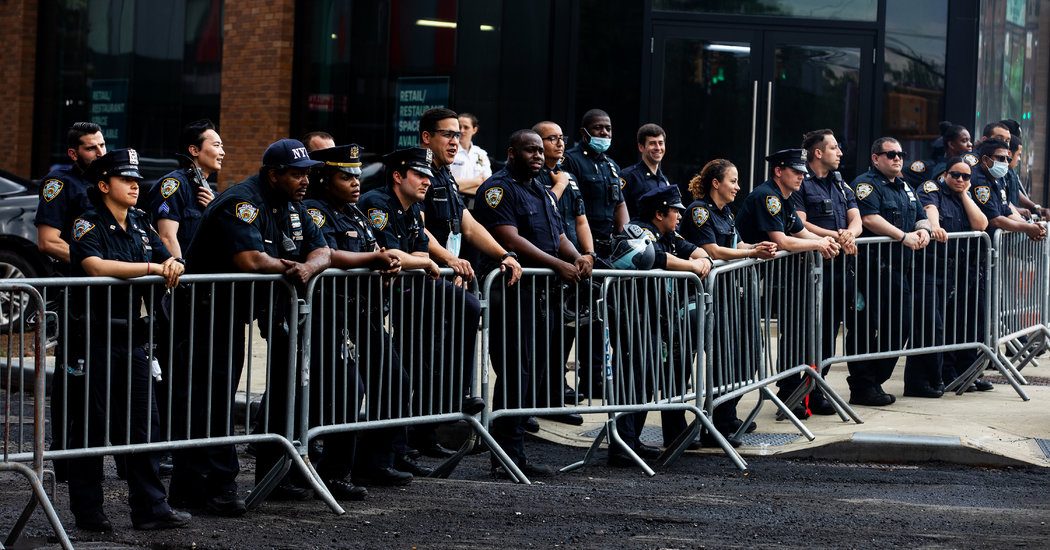 Riot helmets, ballistic vests, shields, batons — fully decked-out police officers have become staples in New York City as the protests against racism and police brutality approach their third week. But increasingly, one piece of equipment has attracted attention with its absence: the face mask.

On any given day, any corner, any group of officers, some or all of them are not wearing masks. Others wear them below their chin. With masks having become as ingrained as shirts and shoes in the vast majority of New Yorkers’ wardrobes, their widespread absence on the police is striking — and to a mayor and governor still fighting the coronavirus pandemic, troubling.

“Police officers should be wearing masks,” Gov. Andrew M. Cuomo said during a news conference in Manhattan on Monday. Likewise, Mayor Bill de Blasio, on his call-in appearance on WNYC on Friday, was asked why officers were unmasked.

”I’m frustrated by it, too,” he said. “The policy is police officers are supposed to wear face coverings in public, period.” But he noted that compliance is far from universal: “It has not been happening consistently. I have had this conversation with Commissioner Shea multiple times. It has to be fixed and that bothers me.”

While police officers may forgo mask-wearing for any number of reasons, from peer pressure within ranks that are loath to change to a desire to more easily communicate, the images have fueled a perception of the police as arrogant and dismissive of protesters’ health — perhaps even at the peril of their own.

And while several officers have conspicuously knelt down with or hugged people at rallies, the widespread failure to use masks is creating a more standoffish look, one that protesters say suggests that the police operate above the rules — one of the very beliefs motivating the nationwide movement.

“If you’re out here to protect the public, it starts with you,” said Chaka McKell, 46, a carpenter from Bedford-Stuyvesant who attended a protest in Downtown Brooklyn on Monday. “The head sets the example for the tail.”

The official New York Police Department policy is that officers should wear masks when interacting with the public. But in a statement on Wednesday, the department dismissed the criticism about the lack of masks as petty.

Skipping personal protection may come with a cost. The city is still reporting hundreds of new coronavirus cases each week, and more than 40 members of the Police Department have died of Covid-19, the police said. Just days ago, Commissioner Shea announced the virus-related death of Chief William Morris, who led the transportation division.

Then the protests began, putting the officers, working in large crowds, in the spotlight. The new questions arise during what seems, from the outside, to have been an evolving relationship between officers and protective masks. In the early days of the coronavirus’s arrival in the region, with cases seemingly few and isolated, officers for the most part set the masks aside, with the encouragement of their leaders.

On March 20, with the city moving toward a quarantine — bars and restaurants had closed three days earlier — Commissioner Shea was asked at a news conference about officers without masks.

“That could very well be a good thing, quite frankly,” he said. “We’re trying to conserve the use of these and use them where appropriate. And I think the medical professionals would tell us that, generally speaking, it’s better to have the masks on the people that are sick as opposed to officers walking around in the street.”

At the same news conference, Dr. Oxiris Barbot, the commissioner of the New York City Department of Health and Mental Hygiene, addressed the issue.

“The time to use a mask is when someone is symptomatic, when they’re coughing, when they’re sneezing, and it’s to ensure that that individual doesn’t contaminate other folks,” she said. “It gives people who are asymptomatic a false sense of security that if they wear this mask, they don’t have to wash their hands, they don’t have to cover their mouths and their noses when they cough or their sneeze.”

Not long after, the governor made masks mandatory for all New Yorkers. Since April 17, anyone visiting an indoor location or unable to maintain social distancing must wear a mask — a striking period of 54 days and counting, perhaps indefinitely for many.

And so, the sight of maskless officers, at gatherings that are protesting police behavior nationwide, rankles some.

A Twitter account, @nypdmaskwatch, has posted photographs of officers without masks, including their names and badge numbers.

At a rally Monday outside Brooklyn’s Borough Hall, 11 of the 13 police officers near one section of the crowd wore masks, with the other two having pulled them down below their chins. But around the corner stood 12 officers, only three wearing masks.

At the entrance to the Brooklyn Bridge stood 38 officers and captains. Eight wore masks, some below the nose, while 14 wore them below their chins and 16 wore none.

Asked about the masks, officers mostly declined to comment or ignored the question. One officer who was confronted about the matter by a young man in Williamsburg on Saturday responded, “We’ve got more important things to deal with.”

One captain who was walking alongside protesters without wearing a mask seemed to suggest the decision falls to the individual officer in the situation at hand.

“The focus is staying at peace with the protesters,” said the captain, who declined to give his name since he had no authorization to speak with the news media. “This isn’t the ideal scenario, but we’re doing the best we can. Ideally, officers wear their masks, they take precautions and they stay safe, but our priority right now is the protest and the protesters.”

Crista Simiriglia, the manager of the band Sunflower Bean, who was passing out Gatorades from the back of their touring van at a nearby demonstration, was struck by the lack of police masks. “It was very startling and very dangerous,” she said.