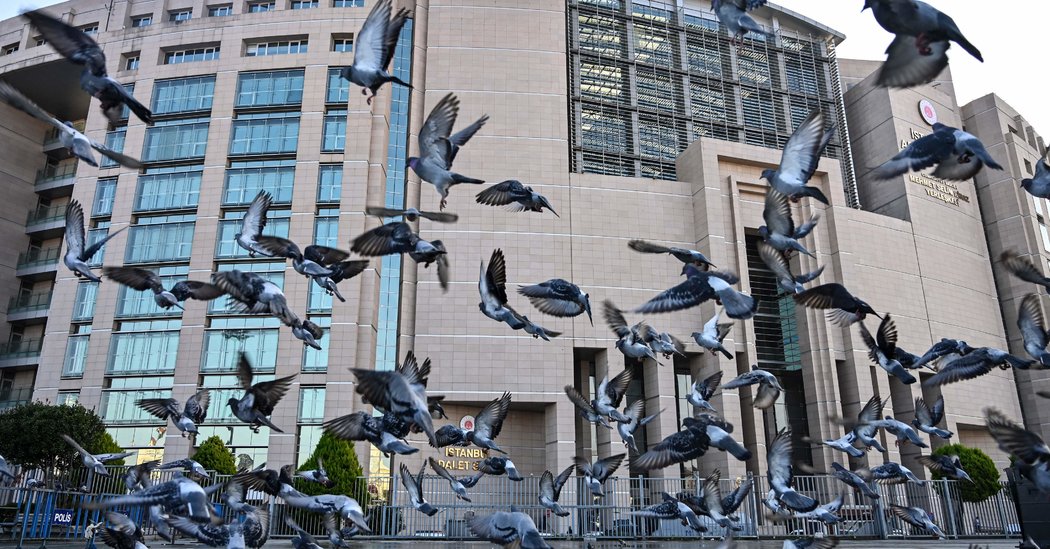 ISTANBUL — An Istanbul court sentenced on Thursday a U.S. Consulate employee to more than eight years in prison on charges of aiding an armed terror group, a ruling likely to exacerbate a long-running dispute between Turkey and the United States over the prosecutions of three Turkish citizens employed by the American government.

Metin Topuz had worked at the American Consulate in Istanbul for 25 years as a translator and later as an investigative assistant with the Drug Enforcement Administration, when he was detained more than two years ago.

His sentence of eight years and nine months was a setback to efforts by American officials to resolve the dispute over the detention of Mr. Topuz, 61, and two other employees of U.S. consulates who have been in jail, under house arrest or under travel restrictions since 2017. U.S. diplomats have said the charges against the employees are baseless, but Turkey has refused to drop them.

Critics have characterized the cases as political hostage-taking by President Recep Tayyip Erdogan as he tried to prevent several court cases against his own officials in the United States from proceeding.

Thursday’s sentencing of Mr. Topuz came amid signs that U.S.-Turkey relations, which had been damaged by the conflict in Syria and Turkey’s purchase of Russian missile-defense systems, were showing signs of improvement.

Mr. Topuz avoided the most severe outcome, as he was acquitted of four espionage-related charges, which would have carried a heavier sentence.

Instead, he was convicted of the lessor charge of aiding the followers of Fethullah Gulen, the U.S.-based preacher who is accused in Turkey of being the mastermind behind a failed coup attempt in 2016 against Mr. Erdogan.

The accusations in Mr. Topuz’s indictment were based on his contacts with police officers believed to be members of Mr. Gulen’s network of followers.

In his defense, Mr. Topuz said he worked primarily as a translator, liaising with Turkish law enforcement officials in the normal course of his job.

The U.S. Embassy in Ankara released a statement on Twitter saying officials were “deeply disappointed” in the decision. “We have seen no credible evidence to support this conviction and hope it will be swiftly overturned.”

“For nearly three decades, Mr. Topuz performed outstanding work appreciated and lauded by officials and citizens of both countries. Under our direction, he promoted law enforcement cooperation between Turkey and the U.S., contributing to the safety of people in both nations,” the statement said.

“The allegations made about Mr. Topuz’s official duties misrepresent both the scope and nature of the important work undertaken by our local staff on behalf of the U.S. government and in the promotion of our bilateral relationship,” it added.

U.S. officials have attended every hearing of their employees’ trials in a show of support. The Turkish judiciary, which restarted work this month after a two-month hiatus because of the coronavirus, is considered to be tightly controlled by Mr. Erdogan.

More than 20 American citizens and the three Turkish employees were swept up in mass arrests in the aftermath of the coup attempt in 2016, accused of being members of Mr. Gulen’s movement.

In total, some 70,000 people have been going through court proceedings in Turkey related to the coup attempt, some in mass trials of more than 100 people at a time. Many of the trials have taken years and are expected to continue through the appeals processes for several more years.

Another consulate employee, Hamza Ulucay, worked as a translator in the American Consulate in the southern city of Adana for 30 years. He was convicted on the same charge of aiding a terror group as Mr. Topuz in January, but received a sentence of four and a half years in prison and was released with reductions for time served. He remains under travel restrictions that prevent him from leaving the country.

The trial of a third consulate employee, Mete Canturk, who works for the State Department’s Bureau of Diplomatic Security, and who was placed under house arrest for two years and is now under travel restrictions, is continuing. Another hearing is expected next week.