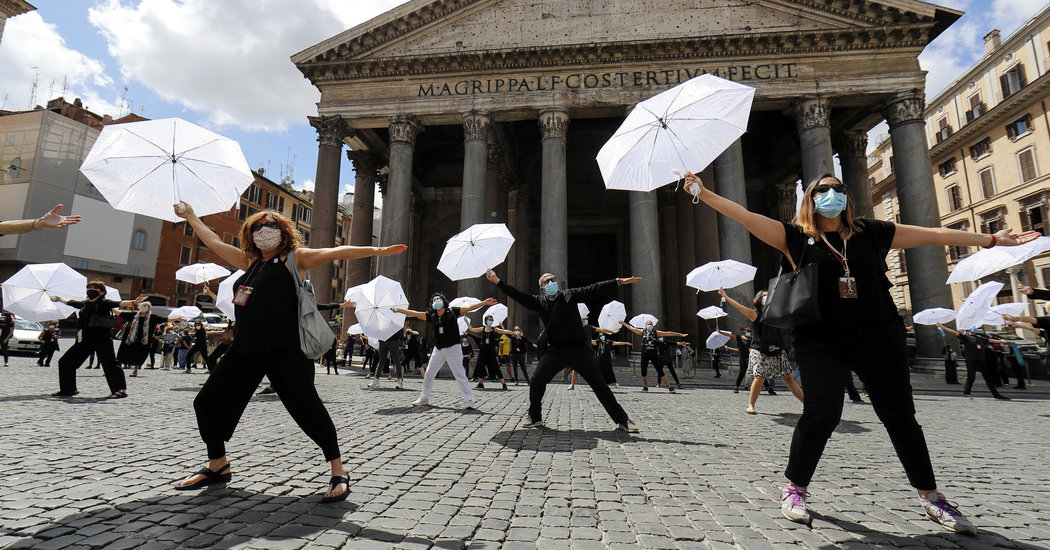 We’re covering what reopenings look like in countries with rising coronavirus cases, Boris Johnson’s response to the U.S. protests and answers to a decades-old Swedish murder mystery.

India has more new daily coronavirus infections than all but the United States and Brazil. But, ready or not, much of India’s lockdown has ended, as have those in other countries struggling to balance economic damage with coronavirus risk.

Some leaders, especially in the developing world, said they couldn’t sustain the punishing lockdowns without risking economic catastrophe for their poorest citizens.

Our correspondents looked at the reopening in India and four other countries — Russia, Iran, Pakistan and Mexico — whose leaders have prioritized restarting even with rising coronavirus cases.

Russia: The country is adding 8,000 to 9,000 new infections each day; even so, Moscow’s mayor lifted many restrictions on Tuesday. One reason, analysts say, is to encourage turnout at a July 1 referendum that could allow President Vladimir V. Putin to remain in power until 2036.

Iran: Iran, an early epicenter of the global pandemic, reopened in early May to salvage its economy. It’s now seeing a second surge; experts reported 3,574 new infections on June 4, the highest number of new cases since the coronavirus crisis began.

At a time when the unrest in the United States is prompting many Britons to examine their own society’s racial injustice, Prime Minister Boris Johnson is still struggling to find his voice.

Mr. Johnson was late to address the protests in London and other cities after George Floyd’s death. He has oscillated between calls for law and order and promises to listen to black Britons.

Relations between President Trump and President Recep Tayyip Erdogan of Turkey were in the worst state in recent memory 10 months ago — heading toward clashes between their armies across the Syrian-Turkish border.

But as the coronavirus threatens recession and rallies their opponents, the two leaders are finding a common cause — for now. On Monday, they shared a few jokes during a phone call, according to Turkey.

“To be honest, after our conversation tonight, a new era can begin between the United States and Turkey,” Mr. Erdogan said afterward.

Details: In recent months, Mr. Trump has even assisted Turkey’s interventions in Syria and Libya. He also did not impose sanctions on Turkey for its purchase of a Russian S-400 missile system, which has helped Turkey stay closer to the West.

Also: President Volodymyr Zelensky of Ukraine won an endorsement for his anti-corruption policies with the approval of a $5 billion lending program from the International Monetary Fund.

Sweden: The country’s judiciary has finally named a man who they believe assassinated Prime Minister Olof Palme on a quiet Stockholm street in 1986. A prosecutor said “reasonable evidence” pointed to Stig Engstrom, a graphic designer, who took his own life in 2000 at the age of 66.

Brazil: As deaths in the country from the coronavirus outbreak surge to the world’s highest, President Jair Bolsonaro is threatening military intervention to protect his grip on power. Political leaders and analysts say that military action remains unlikely; even so, the possibility is destabilizing the nation’s democratic institutions.

‘Gone With the Wind’: The streaming service HBO Max has removed the 1939 movie from its catalog, pledging to eventually bring the film back “with a discussion of its historical context.” Long considered a cinematic triumph, the movie has come under scrutiny for romanticizing the Civil War-era South and glossing over the horrors of slavery.

Snapshot: Above, members the Sikh Center of New York feeding protesters in Queens. The center has served more than 145,000 free meals in the past 10 weeks. It’s part of a Sikh tradition of feeding anyone in need, which has found new purpose during the coronavirus pandemic and the protests over the killing of George Floyd and police brutality.

Madeleine McCann: With a new suspect, journalists have returned to Praia da Luz, the town in Portugal where the British toddler vanished 13 years ago. Residents are wary of the attention, especially while other unresolved crimes have been archived.

What we’re looking at: This drone footage of green turtles migrating to Raine Island, the world’s largest sea turtle rookery, courtesy of The Sydney Morning Herald.

Cook: These crispy kimchi pancakes are both satisfyingly chewy and shatteringly crisp. Use the most flavorful traditionally prepared kimchi you can find — it’ll make all of the difference in this simple recipe.

Watch: Our TV critic has some suggestions on what to watch if you’re looking for a foreign spy thriller, or simply something light. And, these movies showcase L.G.B.T.Q. characters in all of their wonderful complexity.

Behold: We asked 11 illustrators of Asian descent to create a self-portrait, reflecting on their heritage, their stories of immigration and how they identify as Asian-American.

Read: Here’s a look at down-and-out graphic novels including “The Complete Works of Fante Bukowski,” which our reviewer says is both gleefully malicious and unrepentantly stupid — a winning combination, for the most part.

We may be venturing outside, but we’re still safest inside. At Home can help make staying in tolerable, even fun, with ideas on what to read, cook, watch and do.

Hosam al-Ali is a pharmacist in Idlib who volunteered to be the main virus-response coordinator in his region. He keeps an audio diary, which he shared day by day with our Istanbul bureau chief. Here are some of his entries on fighting a pandemic in a war zone. They have been condensed, and edited for clarity.

A Day of Pain

Today I conducted training for the White Helmets [a Syrian civil defense group].

There were two teams, each with 10 people. We did two sessions to avoid crowding.

The next morning, I woke at 5 a.m., and we modified slides for the lecture. The slides outline the criteria for sending people to health facilities. They also tell people how to handle dead bodies.

The whole day my mood was very bad, because my tooth infection had moved from my mouth to my eye, and it was very painful. I started to look like a teddy bear.

The Search for a Ventilator

Yesterday a friend called me. He was looking for a ventilator for his newborn baby. All of the hospital ventilators were busy — and still we don’t have a single coronavirus case.

If that is happening, it means the medical capacity is very poor.

Today I felt depressed: I heard the baby died.

Pressure on All Fronts

There is something very important going on these days. It is not about the coronavirus.

Thank you
Carole Landry helped write this briefing. Samin Nosrat provided the recipe, and Theodore Kim and Jahaan Singh provided the rest of the break from the news. You can reach the team at briefing@nytimes.com.

P.S.
• We’re listening to “The Daily.” Our latest episode is about remembering George Floyd.
• Here’s today’s Mini Crossword puzzle, and a clue: Ice cream holder (three letters). You can find all our puzzles here.
• Times journalists explained how they decide if scientific research is reliable for Times Insider.