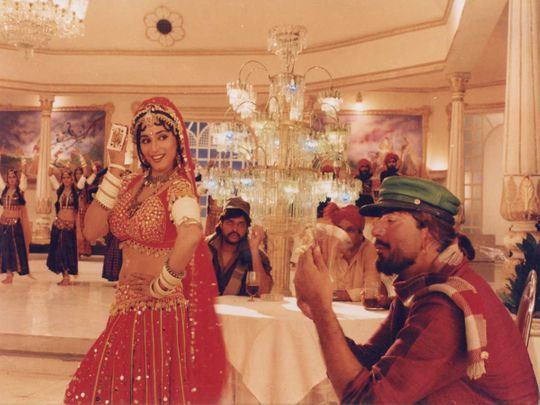 Last September, while promoting his film ‘Prassthanam’ in Dubai, Sanjay Dutt confirmed to Gulf News that he was actively looking to make a sequel to his 1993 hit film, ‘Khal Nayak’.

While the confirmation grabbed headlines, along with Dutt stating that his production house was in talks to rope in Tiger Shroff to play the lead, it appears the film’s other lead star is still in the dark that a sequel is in the works.

In an interview with IANS this week, Madhuri Dixit-Nene stated she had no idea a follow-up was even on the cards.

“That’s news to me. I have no idea. It is a surprise for me,” she said in the interview.

When prompted further to check whether she was keen on being a part of the project, the actress stated: “It depends on the script, how they are planning to do, where they want to shoot. I think we will take things as they come.”

Dutt, meanwhile, appeared very confident in backing the project when he spoke to this newspaper in 2019.

“I can’t speak for others but we are definitely looking at making a sequel to ‘Khal Nayak’ under the Sanjay S Dutt production house. We are still in the talking phase and have approached Tiger Shroff to star in the film,” he said at the time.

Dutt also confirmed he will return to the film as well as Ballu, the terrorist who has a volte face in the end of the film after the love of a woman, Ganga (played by Dixit Nene), prompts him to surrender to the police, which includes his estranged brother Ram (Jackie Shroff).

While details of the new film are yet to be revealed, it is possible the sequel will follow Ballu’s release from prison and his subsequent meeting with Ram and Ganga’s son, played by the younger Shroff.

‘Khal Nayak’, which was directed by Subhash Ghai, broke several records when it released, becoming the fourth highest grossing film in Bollywood in the 90s.

The film also gained notoriety due to its lead star Dutt being arrested the same year under the Terrorism and Disruptive Activities (Prevention) Act in 1993 in connection with the Bombay bombings that year, which resulted in 257 fatalities.

Dutt was later exonerated of those charges but spent time in prison for illegal possession of weapons.

It was rumoured that Dixit-Nene and Dutt were involved in a serious relationship at the time, but parted ways when the latter’s legal troubles began.

Earlier this year, Ghai also told Indian daily, Mumbai Mirror, that he had originally planned to turn ‘Khal Nayak’ into an international production starring legendary Arab actor and Hollywood star Omar Sharif (‘Lawrence of Arabia’, ‘Doctor Zhivago’). The film was also to be produced by Ashok Amritraj, the current Chairman and CEO of the Hyde Park Entertainment Group.

However, due to Ghai’s own discomfort at shooting the film as an international project, he then looked at turning the action-thriller into an art-house project with Jackie Shroff and Nana Patekar in the lead as the cop and the criminal who also happen to be brothers.

Ultimately though, Dutt was roped in as the crime lord Ballu, along with Shroff and Dixit Nene.