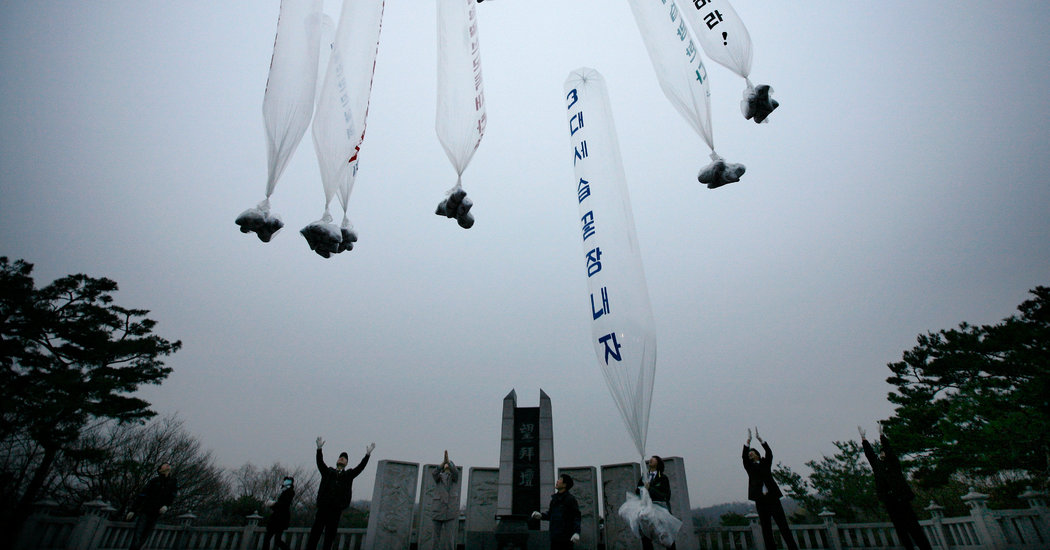 SEOUL, South Korea — The hydrogen balloons float over the world’s most heavily guarded border, unleashing their payloads in North Korea like snowflakes: propaganda leaflets calling Kim Jong-un, the North’s leader, a “devil” who will meet the same bloody end as Saddam Hussein of Iraq and Muammar el-Qaddafi of Libya.

The plastic leaflets, millions of which have pierced the stranglehold of North Korean censorship over the years, recently drew an angry response from Pyongyang, threatening to upend the relatively cordial relations that the Koreas have maintained for two years.

Mr. Kim’s government has called the propaganda — much of it sent by North Korean defectors — a “provocation graver than gun and artillery fire.” This week, it responded by cutting off communication lines with South Korea, which the two countries had set up after delicate peace negotiations.

North Korea has an improbable ally in its efforts to stop the leaflets: the South’s government, which is introducing legislation to ban the launches, in hopes of keeping relations with the North on track.

The government has sued two brothers, both defectors from the North, to try to force an end to their leaflet campaigns. And on Thursday, President Moon Jae-in’s office promised a “thorough crackdown” on attempts to send leaflets and other propaganda across the border.

The issue has raised intense passions, not least among South Koreans living near the border. They are angry because much of the propaganda material ends up in their villages, creating a persistent trash problem.

Park Sang-hak, one of the defectors being sued by the South, is enraged by the government’s efforts to stop him.

“South Korea is gagging us, who are its citizens, while kowtowing to the evil regime in the North,” said Mr. Park, who leads a group called Fighters for Free North Korea. “The more they suppress us, the more leaflets we will send, and the more often.”

Despite numerous death threats and at least one apparent attempt by North Korea to assassinate him, Mr. Park has been sending balloons across the border since 2004. Besides the leaflets, some are loaded with Bibles, dollar bills, small radio sets (so that North Koreans can listen to banned broadcasts) or memory sticks with content that the North considers subversive, like South Korean soap operas.

And Mr. Park’s younger brother, Park Jong-o, has been carrying out a seaborne campaign. He and his supporters release plastic bottles full of similar propaganda (as well as dried rice) into waters near the border, hoping that the currents will carry them to the North.

The idea is to chip away at the information blackout that makes the personality cult around Mr. Kim possible.

In the North, all radio and TV sets are designed to receive only the government’s propaganda-filled programs. The country’s smartphones are cut off from the global internet. Pyongyang tries to jam broadcasts from the outside world, but it can do little about balloons that drift too high for its soldiers to shoot down.

The recent batch of leaflets — half a million of which Mr. Park sent on May 31 alone — may have come at a particularly upsetting time for Mr. Kim.

The North Korean leader has been struggling; his nuclear diplomacy with President Trump collapsed last year with no easing of the sanctions gripping his country, and his efforts to build a “self-reliant economy” have stalled. And Covid-19 has further hurt the North’s ability to acquire badly needed raw materials and hard currency through trading and smuggling.

“As its economic condition deteriorates, North Korea needs to shift the blame to an external enemy while using the leaflet threat to consolidate internal unity,” said Shin Beom-chul, an analyst at the Korea Research Institute for National Strategy in Seoul.

Over the past week, North Korea has staged outdoor rallies denouncing the propaganda. People pumped their fists into the air, vowing to “squash” defectors and the “human scum” who dared to sully Mr. Kim’s “supreme dignity.”

And what had been an almost giddy period of détente between the two Koreas has descended into bitterness, most of it coming from the North. “The nonstop disposal of dirty rubbish from the south,” North Korea recently said, has made it realize “that enemies are enemies after all.”

The propaganda touches a historical nerve. Long after the Korean War ended in 1953, North and South Korea continued to wage psychological warfare, sending leaflets in both directions and broadcasting diatribes over shortwave radio, as well as blaring them from huge loudspeakers set up at the border.

North Korean leaflets beckoned South Korean soldiers to flee to “the socialist paradise.” The South tried to lure North Koreans by highlighting its higher standard of living and, more recently, by deploying the sugary harmonies of K-pop girl bands.

When Mr. Kim met with Mr. Moon, the South’s president, in 2018, they agreed to end their cross-border propaganda. But the Koreas had reached at least three such agreements before, none of which lasted. Mr. Moon’s party, which lacked a majority in Parliament, failed to pass a leaflet ban into law, and defectors from the North kept sending them.

“My leaflets are to the North Korean regime what David’s slingshot was to Goliath’s forehead,” said Lee Min-bok, another defector, who calls himself a “balloon warrior.” “They show North Koreans that their country’s personality cult and its deification of the Kim family are all built on lies.”

Mr. Lee releases up to 1,500 balloons a year, each carrying 30,000 of his leaflets. They challenge North Korea’s false claim that the Korean War started with an invasion from the South, and they ask why Mr. Kim is building ski resorts when the country can’t feed its own people.

“The leaflets don’t make noise or produce heat, and slip through the radar,” Mr. Lee said. “The North can’t stop them, except by pressuring the South Korean authorities to stop them.”

Whether the authorities should yield to that pressure is a subject of much debate.

In 2015, the South’s National Human Rights Commission said the government should not stop the leaflet campaigns, arguing that an agreement between the Koreas “cannot limit individual citizens’ basic right of freedom of expression.” But in 2016, the Supreme Court backed a move by the police to prevent the launches. The court ruled that the defectors’ freedom of expression conflicted with the safety of people living near the border.

People there have been worrying about retaliation from North Korea — especially since 2014, when the North shot at propaganda balloons and some of the bullets landed in a South Korean village.

Villagers’ patience has also been tried by the fact that many of the leaflets and other items never make it out of the South.

“I first thought they were doing something good: sending bottles of rice to poor North Koreans,” said Choi Min-ki, who lives on an island in Ganghwa County west of Seoul. “But soon we learned that most of the bottles cluttered our fishing nets or washed back up on our beach, with rice rotting inside.”

“The garbage is a real headache for us,” Mr. Choi said. “A villager once collected 1,000 bottles cluttering our shore in a single day.”

When the Park brothers and their supporters brought more bottles to Ganghwa County this week, residents blocked roads to deny them access to the beaches.

Kim Tae-nyeon, a leading member of Mr. Moon’s Democratic Party, which gained a parliamentary majority in April elections, said this week that the party would again introduce legislation to ban the leaflet launches.

South Korean officials said the recent launches had particularly upset North Koreans because of speculation that the propaganda material could somehow be carrying Covid-19. Officials were alarmed by defectors’ threats to use drones to carry leaflets deeper into the North, which they said Pyongyang could see as a much more provocative act.

“Moon should stand up to this bullying from the North, and not sacrifice democratic values and rights to placate an authoritarian North Korean leadership which everyone knows issues bellicose threats as a standard response to any irritation,” Mr. Robertson said.