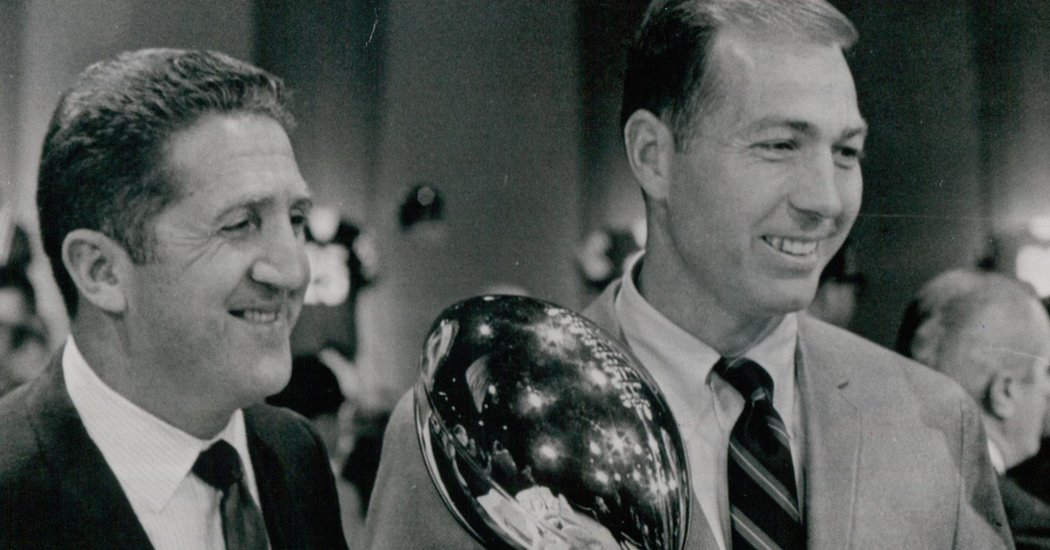 Murray Olderman, who in a career of more than 60 years chronicled the sports world as what he called a “rare double threat,” turning out nationally syndicated cartoons while also writing features and columns, died on Wednesday in Rancho Mirage, Calif. He was 98.

His daughter Lorraine Olderman confirmed the death at a retirement community. She said he had recently had a heart attack.

Supplanted by television, the internet and the decline of newspapers, sports cartooning is a dying art. But Mr. Olderman thrived when caricatures were featured attractions of the sports pages.

His work was syndicated by the Newspaper Enterprise Association, a Scripps Howard service, and appeared in as many as 750 newspapers from the early 1950s to the 1980s. His books, most of them about football, usually included his drawings, and he wrote for national magazines, including The Saturday Evening Post and Sport.

As a young man in the New York City suburb of Rockland County, Mr. Olderman was fascinated with the sports cartoons of Willard Mullin, whose Brooklyn Dodger “Bum” ran in The New York World-Telegram, and Leo O’Mealia of The New York Evening Journal and later The New York Daily News.

His talent for drawing arose “from doodling in class,” he recalled in his memoir, “Mingling With Lions” (2004). “I could draw a line no straighter than the next guy. I just liked the looks of a cartoon on a sports page. And I was willing to put in the time to try to learn the art.”

Mr. Olderman often drew athletes, either in head-and-shoulder images or in the midst of action, accompanied by text blocks citing their exploits. But he also sought a more creative touch.

In a drawing titled “On the Ropes,” he commented on what he viewed as “the increasingly adversarial relationship between athletes and the print media.” It portrayed a hulking figure in a football helmet wielding boxing gloves and clad in a jersey labeled “Today’s Athlete,” closing in on a bespectacled victim clinging to a corner of the ropes, also with boxing gloves but wearing a tie and a shirt labeled “Press.”

He poked fun at football jargon by caricaturing the broadcasters Chris Schenkel and Pat Summerall, with Mr. Schenkel citing arcane defensive strategies that stymied the quarterback Y.A. Tittle, followed by Mr. Summerall’s simple summation: “He got thrown for a 3-yard loss.”

But Mr. Olderman generally stayed away from a hard-edge satirical approach at a time when sports pages and their cartoons were more entertaining than critical.

“In portraying these people, most of the time I couldn’t help but emphasize their heroic qualities, often romanticize them,” he wrote in his memoir, in which he sought to portray what the athletes he knew “were really like.”

Murray Olderman was born on March 27, 1922, in Manhattan, a son of Max and Jennie (Steinberg) Olderman, Jewish immigrants from Russia. His father worked in Manhattan’s garment district, and his mother was a homemaker. He grew up in Spring Valley, N.Y.

At a time “when pennies were scarce,” as Mr. Olderman told it, his father brought home daily newspapers, with their sports cartoons, that had been left behind on buses by his fellow commuters.

Mr. Olderman graduated from the University of Missouri, where he majored in journalism, and received another bachelor’s degree from Stanford, where he studied French in a World War II Army program and was a member of Phi Beta Kappa. After the war, he obtained a master’s degree from Northwestern’s Medill School of Journalism.

He worked briefly at The Sacramento Bee and The Minneapolis Star before the Newspaper Enterprise Association hired him in 1952 to develop a daily sports comic strip. But that idea never panned out. Working out of the syndicate’s New York office, he began turning out general sports cartoons, columns and features instead.

Mr. Olderman became the syndicate’s sports editor in 1964 and its executive editor a few years later. He relinquished his executive post in 1971 and moved to San Francisco, where he worked as a roving columnist and again as a cartoonist for the syndicate and twice won the National Cartoonist Society’s award for best sports cartooning. He retired from the syndicate in 1987.

In addition to “Mingling With Lions,” his books included three illustrated volumes on pro football for Prentice-Hall, “The Pro Quarterback,” “The Running Backs” and “The Defenders”; “Just Win, Baby” (2012), a biography of Al Davis, the Oakland Raiders’ owner and coach; and “The Draw of Sport” (2017), which combined his full-page illustrations of some 150 sports figures with his remembrances of them.

Serving as a lieutenant in the Army, he arrived in France two days before Germany’s surrender in May 1945. Fluent in German as well as French, he took part in the interrogation of suspected Nazi war criminals in the prelude to the Nuremberg trials.

While on a trip to Europe in 1970 with fellow editors from the Newspaper Enterprise Association, he interviewed Albert Speer, the architect of Hitler’s war machine, who was living in Heidelberg, Germany, following his 20-year imprisonment. Mr. Olderman wrote of those conversations in syndicated articles.

He also wrote about his travels to the Soviet Union to meet with an aunt and cousins his family previously thought had perished in the Holocaust.

In addition to his daughter Lorraine, he is survived by another daughter, Marcia Linn; a son, Mark; a sister, Diane Morton; five grandchildren; and three great-grandchildren. His wife, Nancy (Calhoun) Olderman, died in 2011.

A few sports cartoonists, like Bill Gallo of The New York Daily News and Drew Litton of The Rocky Mountain News, still flourished in Mr. Olderman’s later years. But he observed in his memoir that “a new breed of editor came in, with emphasis on glitzy photo layouts and a penchant for downsizing.”

“The sports cartoon as we knew it was virtually extinct,” he lamented. “In its place was that halftone of a runner sliding into second base.”

Mr. Olderman reflected on his long career in a personal vein when he was interviewed in 2017 for the community news publication The Columbia Missourian, in which he had published his first illustration in 1941 as a junior at the University of Missouri.