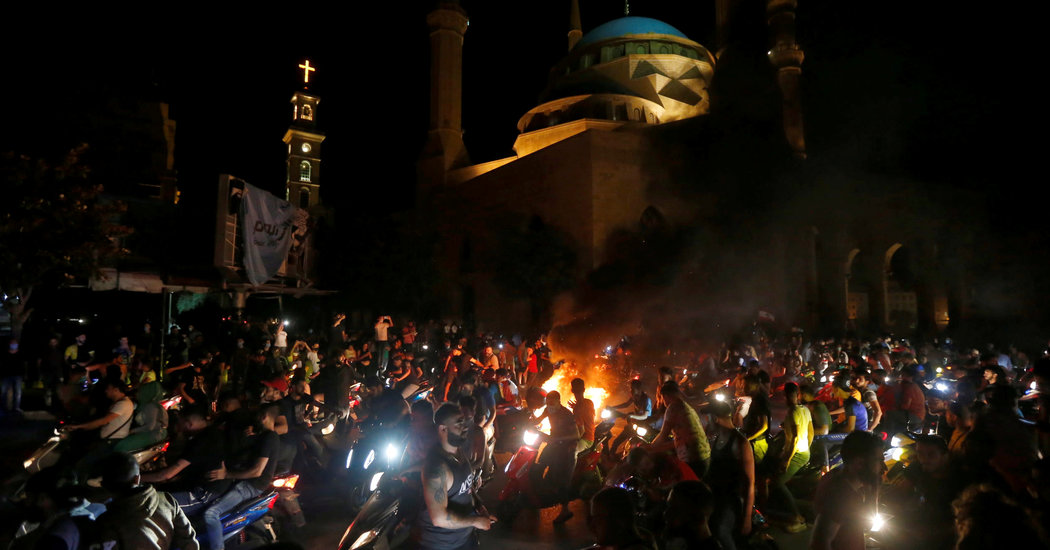 BEIRUT, Lebanon — A new wave of anti-government protests erupted across Lebanon on Thursday with people blocking roads, burning tires and chanting against the political elite amid a deepening economic crisis.

The protests, in a number of cities and in multiple parts of the capital, Beirut, did not appear to be coordinated, but broke out after the Lebanese pound sank to a new low against the U.S. dollar, obliterating the purchasing power of many Lebanese.

Prime Minister Hassan Diab called for an emergency cabinet meeting on Friday to address the crisis.

Lebanon, a sectarian democracy with 5.5 million people, has been mired in intertwined political and economic crises since protesters took to the streets last fall to denounce the country’s leaders for decades of mismanagement and corruption.

Those protests forced the resignation of Prime Minister Saad Hariri in October, but petered out in March amid a government-imposed lockdown aimed at preventing the spread of the coronavirus.

The lockdown accelerated the country’s economic decline. Businesses have closed and unemployment has spiked as the government has cascaded toward insolvency. In March, it failed to make a $1.2 billion payment for foreign bonds, the first such default in Lebanon’s history.

A new government led by Mr. Diab, who was sworn in in December, is in talks with the International Monetary Fund over a multibillion-dollar aid package, but there are no signs of an imminent agreement.

Much of the public anger has focused on the banks, which have imposed tight restrictions on dollar withdrawals, and on the collapse of the Lebanese pound, which the government had kept pegged at 1,500 to the dollar for decades, permitting Lebanese to use the two currencies interchangeably.

But the pound’s value has been dropping on the black market for months, and on Thursday reached a new low: more than 5,000 to the dollar. That is a 70-percent drop in value since October.

Thursday’s protests appeared to be a spontaneous burst of anger from citizens who have watched the government repeatedly fail to carry out reforms while the value of their salaries and savings has dropped.

Hundreds of protesters gathered in central Beirut, blocking a main thoroughfare, lighting bonfires and chanting against sectarianism, according to videos posted on social media. Other protests broke out in the southern cities of Sidon and Nabatiyeh and on the main highway running along the Mediterranean coast.

Protesters in the northern city of Tripoli lit a branch of Lebanon’s Central Bank on fire and clashed with security forces who tried to disperse them with tear gas, according to the state-run National News Agency.