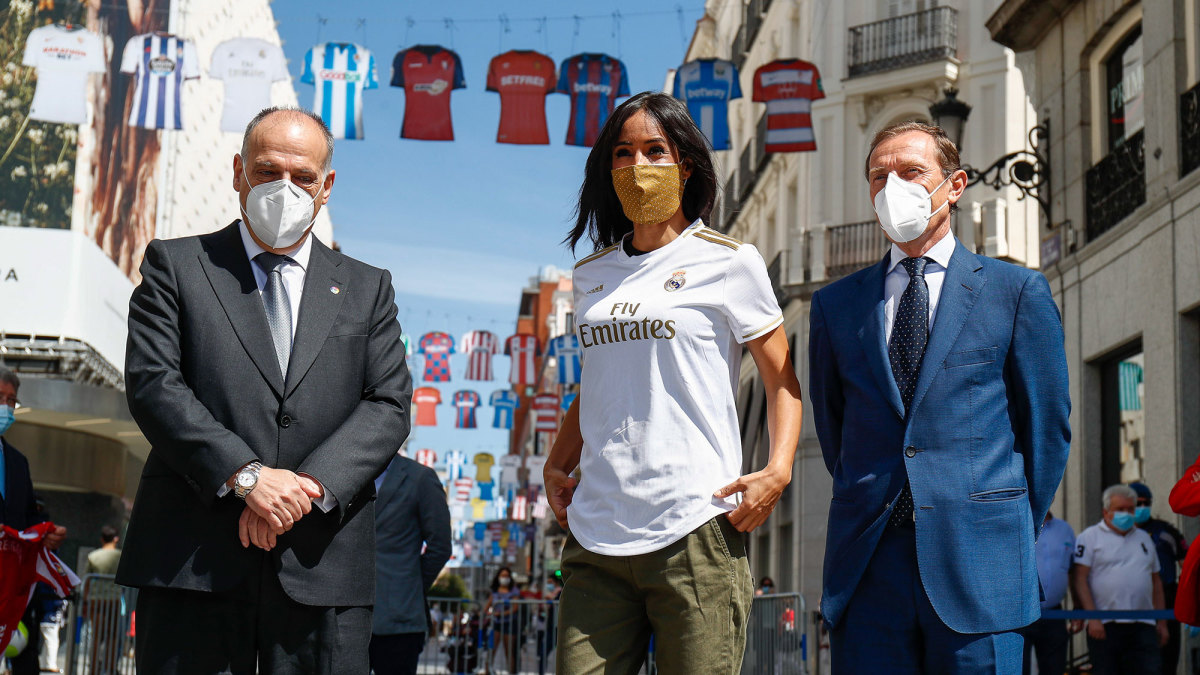 If there’s a non-military equivalent to DEFCON 1, then the Liga Nacional de Fútbol Profesional office in Madrid may have hit it on April 28.

The coronavirus pandemic remained in full swing in Europe, and that afternoon, as La Liga officials continued to work on their plan to restart the Spanish soccer season, French Prime Minister Édouard Philippe announced the definitive cancellation of the Ligue 1 and Ligue 2 campaigns. Thus, France became the first of Europe’s “Big Five” to cut short its season. Worse still, there were reports that President Emmanuel Macron and sports minister Roxana Maracineanu were lobbying their counterparts in England, Germany, Italy and Spain to do the same.

“I thought there could be a cascade effect on countries like Spain or Italy, where there were still many doubts,” La Liga president Javier Tebas told Sports Illustrated. “What I did was to react immediately, and with my communications team I asked them to act as quickly as possible, and this was by saying that it was a very rash decision from the French government. It was a big mistake. And I said that very clearly and I said it immediately to prevent a cascade effect.”

“We had been told that [Sánchez] would say that Spain would return to the competition. But at the same time, we had quite a rough time after the announcement by the French prime minister. Fortunately, there was good news at the end,” Tebas said.

Some measure of calm was restored a few hours later. Sánchez indeed confirmed that as part of the country’s return to what he called a “new normal,” La Liga players could resume individual training the following week and then start practicing in small groups on May 11. At the time of Sanchez’s address, only the USA had more confirmed coronavirus cases than Spain. It was hit hard, and lockdown measures had been strict.

La Liga wanted to come back. That’s no surprise. A key difference between Spain and France (and the remaining “Big Five” countries) however, was how much its national government wanted soccer to come back.

“We count for 1.37% of the Spanish GDP. We create a huge amount of jobs—about 180,000 jobs,” Tebas said. “It is part of the Spanish brand and the government wanted to do its best to make this possible, assuming all the safety measures were implemented.”

And so with that support, plus a lot of hard work crafting a strategy and series of protocols designed for a country whose suffering during the pandemic far exceeded Germany’s (the Bundesliga resumed in mid-May), Spanish soccer has returned after going on hiatus in early March. Second-division clubs Rayo Vallecano and Albacete staged a soft opening Wednesday by finishing off an abandoned game, and the big show was scheduled to kick off Thursday with the Seville derby between Sevilla and Real Betis. Each La Liga team will play its 11 remaining league matches in time to finish off the season by July 19. Barcelona (58 points) and Real Madrid (56) will compete for the title, while at least a half dozen clubs are vying for one of the two remaining Champions League invitations.

For players and coaches, the real work is just beginning. For Tebas, Sánchez and their colleagues, it’s been underway for months. Returning soccer to Spain, which has suffered more than three times the number of coronavirus deaths than Germany, required a heavy lift. The initial ground rules were established 10 days before Philippe’s bombshell, during an eight-hour meeting between Tebas, Spanish soccer federation president Luis Rubiales and Spanish sports minister Irene Lozano.

La Liga faced a €1 billion loss if the season was canceled. But that deficit would be reduced to just €300 million if it could finish the 2019-20 campaign behind closed doors (although Tebas wouldn’t rule out fans returning at some point this summer). With its financial future on firmer footing, the LNFP increased its funding commitment to lower-tier soccer and amateur sports in Spain by €200 million over the next four years. It’ll also be promoting Spanish tourism during the next two match days. In return, and with a promise to adhere to training and playing protocols even stricter than the ones introduced in Germany, La Liga secured the sort of support that resulted in Sánchez’s emphatic reply to France 10 days later.

“Football is really public here and around the world. There are good points about that but there are also difficult points about that. We needed to show the community that football is coming back because we are able to make all the assurances to guarantee minimal risk to the players,” La Liga head of revenue, marketing and international development Óscar Mayo told Sports Illustrated.

“We had to work to convince the health institutions, the [head] of the government and the rest of the institutions. It would not be easy. But we have showed them we are working really hard and really professionally to prepare the protocols and to check that the protocol is being followed by the clubs.”

The initial versions of La Liga’s return-to-training (compiled in mid-April) and match-day (mid-May) protocols total more than 50 pages, and they don’t mess around.

“The protocol covers even the players’ homes,” Tebas said.

Like the Bundesliga’s, La Liga’s guidelines account for precisely who can be where inside and around a stadium and when, along with what must be separated or sanitized. They cover how meals are prepared and distributed at team facilities and how training gear should be stored and laundered. Initially, they required players to change into new uniforms at halftime, the disinfection of stadium hydrotherapy areas that were are off limits anyway, a specific temperature and humidity inside players’ hotel rooms, health certifications for every credentialed person at a stadium, and the delivery of groceries to players’ homes in between match days, among other details.

Over the past few weeks, some of the stringent terms—such as mandatory daily testing—have been relaxed as the curve flattened and Spain started to recover. When training resumed in early May, around 2,500 tests were conducted on La Liga players and technical staff. Only eight were positive. And on June 1, the country went 24 hours without a new coronavirus death for the first time since mid-March.

But La Liga will remain vigilant. It has brought the organization of every single one of the 464 team trips required to finish the season—whether it’s a cross-country planes, trains and automobiles journey or a bus ride across town—in house, creating what amounts to a bespoke travel agency. LNFP employees who were furloughed, such as those who organized events canceled by the pandemic, were rehired to arrange the trips, La Liga head of relations with international sports associations Javier Morente said.

In addition, the league has placed an inspector with each of the 42 first- and second-division clubs. That individual, an LNFP employee, will monitor that club 24/7 to ensure its compliance with the protocols. Each evening at 7 p.m., those inspectors check in on a call to the league office. An hour later, a “crisis committee” convenes and intervenes with teams that may have erred.

“If any team isn’t following the rules, we open a formal investigation. There have been five or six teams that we’ve had to communicate with them that they are not following the rules,” Mayo said. “The clubs know that this inspector, they are every day controlling and checking that the rules are being followed.

Morente added, “We monitor social media as well, in order to make sure not only that the protocols are followed but also in their personal lives. We make sure they respect their health and the recommendations.”

One interesting source of recommendations has been Tebas’s brother, Dr. Pablo Tebas, who’s an epidemiologist at the University of Pennsylvania. The LNFP has looked around the world for help and insight. Through 11 foreign offices and its delegate program, which places La Liga representatives in more than 40 countries, it’s been able to establish relationships with a variety of sports leagues and organizations.

“We are monitoring the professional baseball league in Taiwan,” Morente said.

And through its efforts to strengthen the European Leagues organization and combat the prospect of a super league, La Liga has improved its lines of communication to the governing bodies of other soccer circuits on the continent. The CEOs of the “Big Five” league have been conducting a Tuesday afternoon conference call since April.

Among the four “Big Five” leagues in countries that were hit hard by the coronavirus, Tebas said La Liga is the first to return because, “We worked very hard, shoulder to shoulder with the government, to make this possible.”

He added, “I think it’s because our health care protocol is really very efficient, has been very efficient, and it has reduced the risk of infection of our players to the maximum, both during training sessions and during the games themselves. Our protocol was copied by many other countries. We spent many weeks on it and I think it’s a wonderful protocol, and it’s made it possible to come back to play so soon.”

So La Liga, which is as integral to Spain’s global identity as tapas and Flamenco, will return to settle its closest title race since 2017. And it will do so just a couple months after the country was in crisis. The keys were getting an early start, its relationship with the Spanish government and refusing to let decisions and distractions across the border inject any doubt.

“We didn’t consider in any moment the potential to cancel the league,” Mayo said. “We didn’t want to talk about that and we didn’t want the clubs to think what would happen if we canceled the league. We wanted to have all the clubs and stakeholders thinking that we are going to be back. It was our main topic, because if we started to speculate about what would happen, it would be dangerous

“We’re not talking about what would happen if we don’t start again. We had just one objective—the path to finish the league.”