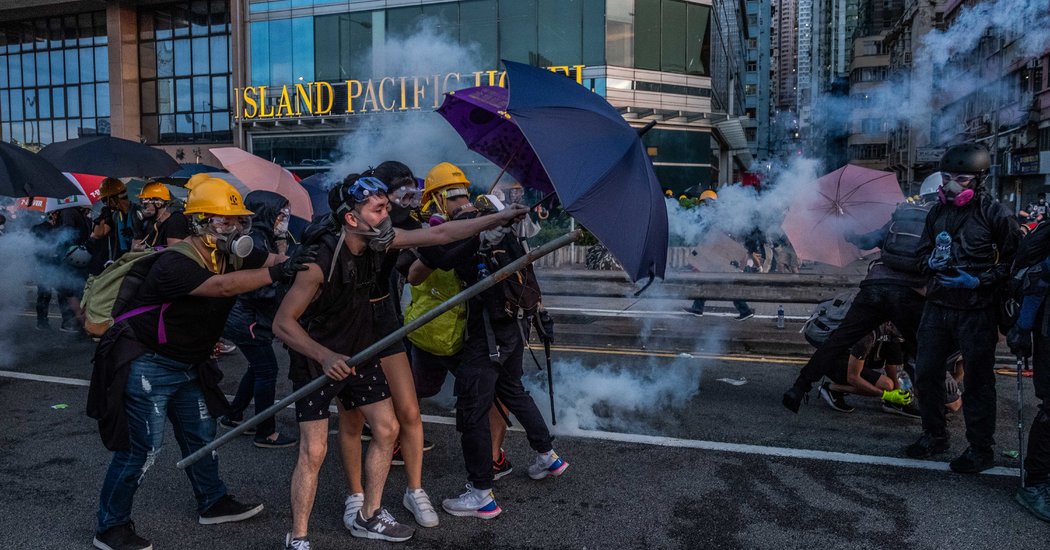 HONG KONG — A Hong Kong judge on Thursday summoned a traffic officer to appear in court over the shooting of a demonstrator last year, making him the first member of the police force to face charges over the street clashes that have roiled the city since last summer.

The case was brought by a pro-democracy lawmaker who filed a private prosecution, a seldom-used mechanism under Hong Kong law. The lawmaker, Ted Hui, filed his suit against the officer in January, using donations to pay for legal expenses.

Under Hong Kong law, the Department of Justice can now decide whether to intervene in the case. If it does so, it can choose to prosecute the case or terminate it. The department did not immediately respond to a request for comment.

Thus far, Hong Kong prosecutors have not pursued any charges against officers over the police response to the protests that began last June. A government panel last month cleared the police of accusations that they had used excessive force, in a report that was widely rejected by protesters and their supporters.

Mr. Hui told reporters on Thursday that he believed the court summons was meaningful, because it sent a signal that officers would be held accountable for their actions.

“If officers misuse their authority or their weapons, they will have to take personal responsibility,” he said. He called on the Department of Justice not to block the case.

The court approved three of the five charges that Mr. Hui had brought against the officer, including shooting with intent to cause grievous bodily harm to a person, a charge that carries a maximum penalty of life in prison.

The two other approved charges, of dangerous or reckless use of firearms, each carry a maximum sentence of seven years. The court rejected a charge of attempted murder.

A court granted the officer anonymity in another case and his name is being withheld to avoid running afoul of that order.

The protests began over legislation that would have allowed extraditions from Hong Kong, a semiautonomous Chinese city with its own legal system and civil liberties, to mainland China. That bill was withdrawn after months of demonstrations, some of them violent. But public anger has continued over other issues, including the police’s use of force.

Officers have responded to protesters with batons, pepper spray, tear gas and, on a dozen occasions, live rounds. The police shot three people during the protests, but none were killed.

Mr. Hui filed the charges against the officer over a shooting on Nov. 11. Video showed an officer drawing his weapon and firing three rounds at protesters who had surrounded him, in a neighborhood where traffic had been snarled by roadblocks.

One bullet hit a protester in the abdomen, and he fell to the ground. The officer later said he believed the protesters had tried to grab his gun.

The right to pursue a private prosecution has a centuries-old history that dates to the early era of common law, when cases were pursued by individuals rather than the state. In the late 1990s, such a mechanism was used in Hong Kong about six times a year on average, according to a government statement dating from the period.

The Hong Kong police have made nearly 9,000 arrests related to the protests. About 100 people have been convicted and 1,600 are facing prosecution, with 5,700 others still under investigation, The South China Morning Post reported.