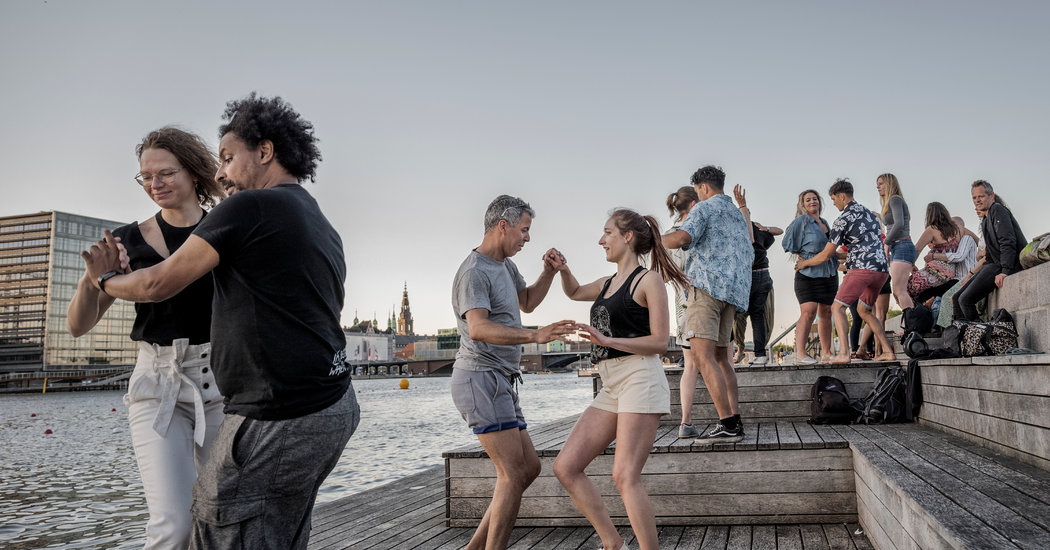 Europe is emerging from a monthslong lockdown. But the universe in which Europeans are resurfacing is neither the reality they knew, nor an entirely new one.

Cafe chairs are back on the sidewalks, but the baristas are wearing masks. The chefs have returned to the kitchens, but the diners are divided by plexiglass. At the airports, the terminals are still empty, the tourists nowhere in sight.

Laetitia Vancon, a photojournalist for The New York Times, spent two weeks in late May and early June photographing this peculiar and fleeting moment in European history, working alongside me, a Times reporter. We drove through six European countries, trying to capture a world that teetered on the lip of normality but often toppled into the surreal.

At a deserted hotel in Prague, we found a forgotten chess board, its pieces abandoned mid-game. It felt much as Europe itself did — paused in time, bereft of people and purpose.

In a parking lot that night, we watched something that edged toward normalcy, but fell just short: A group of actors prepared a stage set — but then performed to an audience of cars.

It was only a simulacrum of reality, an approximation hovering “between what we had before,” one theatergoer mused, “and what we have to come.”

Live theater was back, but the theatergoers were cocooned behind their windshields.

There were no tourists in Prague’s medieval core. The bars were closed. By law, everyone had to wear masks.

Yet the next morning, the world stirred. Overnight, the mask rule had been relaxed. Businesses started to reopen.

The chess pieces were beginning to move again.

In Amsterdam, the lockdown was as revealing as an ebbing tide — rushing out to sea to leave behind a beach covered in flotsam.

In the city’s main red-light district, the lockdown had emptied the area, revealing the contours and nuances of streets that would usually be crammed with tourists.

Stranded on the sand were the sex workers themselves, in many cases now destitute.

“No photos of sex workers,” said the signs on the brothels. “Fine: 95 euros.”

But apart from Ms. Vancon, there was no one with a camera.

It was almost startling to find people drinking outside.

The lights were still on in the red-light district, but the doors were mostly locked.

In Germany, restaurants had just reopened, and the waiters worried whether the diners would see their smiles. A sommelier wondered how he would smell the wine.

An orchestra was back up and running, but performing to only one listener at a time.

And pursuits that once were banal — enjoying a coffee in the sun, or a dinner with friends — were now joyous, surprising and even tinged with danger.

“Now you can sit outside again?” marveled a Polish tour guide in disbelief, sipping coffee with a friend for the first time in months.

“So strange to see,” his companion said.

In Schüttorf, a small German town near the Dutch border, a nightclub hosted guests. But the clubbers had to stay in their cars.

They were allowed outside only to visit the bathroom.

Unlike in other parts of Europe, almost no one wore masks in Denmark. Dancers embraced each other by the side of a canal, as if the pandemic had never happened.

But beneath this veneer, some routines were still restricted.

In an industrial wasteland in northern Copenhagen, a family of churchgoers said their prayers from the comfort of their car, as their pastor preached to them in a parking lot. As in Prague and Schüttorf, communities were coming together again, but still divided by their windshields.

Yet what seemed strange earlier in our journey now seemed almost predictable. This was a world in which the familiar sometimes felt unexpected — while something as unexpected as a drive-in church was now beginning to feel familiar.

On a beach in eastern Copenhagen, it felt surreal to find something as normal as a sunbather.

Or, in a western suburb, to stumble across two sparring boxers.

In Geneva, the wealthy were back at the bistros and bars, but the lives of the poorest had been immeasurably damaged.

After losing their jobs during the lockdown, thousands were lining up for hours for a food handout — in one of the world’s richest cities.

Yet if this reality felt new and strange, in many ways it wasn’t.

The pandemic had simply made visible an underclass that had always existed beneath the surface.

Migrant workers have long lived in the housing projects on the city’s periphery. But many residents had previously chosen to ignore them.

Before the pandemic, these migrants often worked as cleaners and maids. Now they were jobless, relying on bags of donated food to survive.

But elsewhere in the city, residents rediscovered the joys of a Friday night.

The longer we traveled, the faster Europe seemed to accelerate.

Cars were back jamming the streets.

Chatter was returning to the classrooms.

Protesters were reclaiming the squares.

And families were beginning to meet again.

In a village near the Danish-German border, we found a family reunited in celebration of a grandparent’s 88th birthday.

Borders were easing. Sophia Breuer returned by ferry to Germany, after visiting her mother in Denmark for the first time in months.

In Berlin, friends met again beside the Spree river.

In Belgium, an old distillery smelled as it must have done at its founding two centuries ago. The stench of alcohol floated down the street outside, an early hint of the gin being distilled within.

But even here, initial impressions deceived.

On this day, the distillery was actually turning the alcohol into hand sanitizer. In fact, every week the company now makes more disinfectant than gin — clinging onto its pre-pandemic identity, while adapting to the post-lockdown reality.

A nearby hotel also tried to bridge the old world with the new. It welcomed guests again, but only if they kept themselves to themselves. The dining room was closed, so this couple dined in isolation outside their room.

On a bridge connecting Belgium with Germany, cross-border traffic was picking up.

At a supermarket in northern Belgium, the cashiers found an alternative to the face mask.

Across the continent, Europeans were gradually adapting to the new reality.