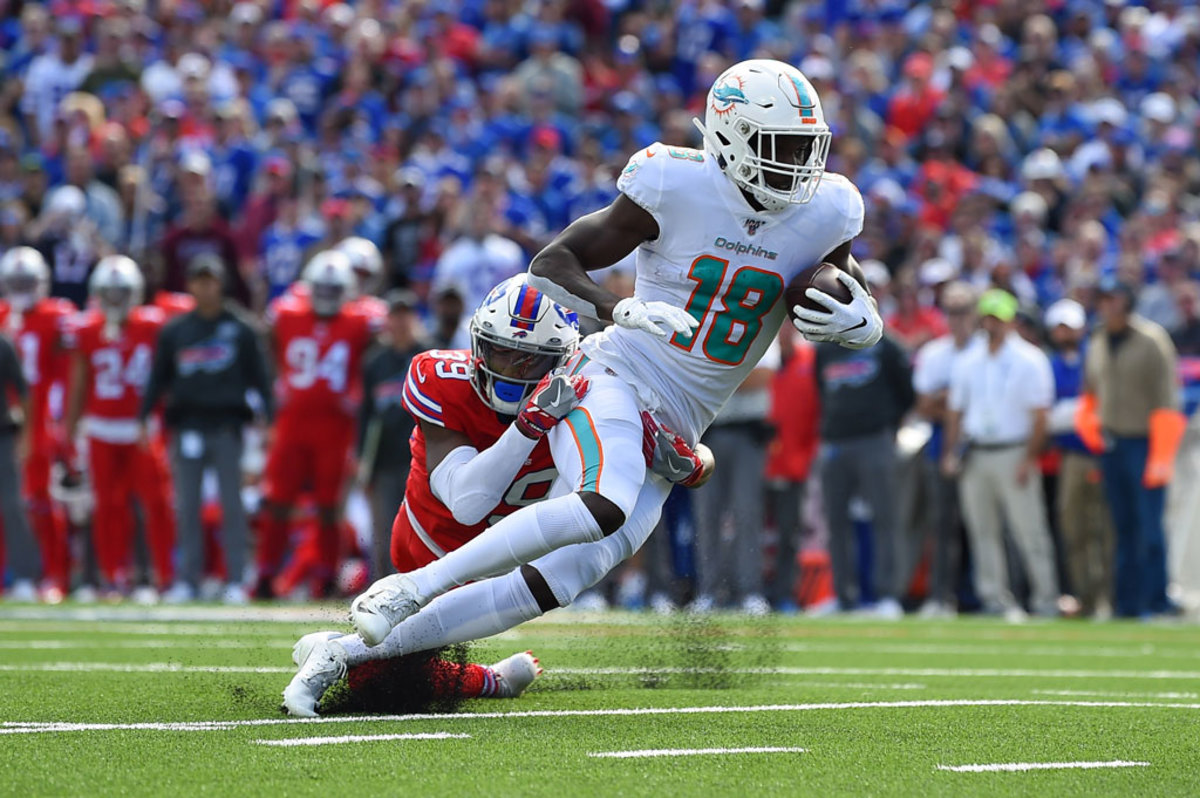 If you didn’t add Miami Dolphins WR Preston Williams to any of your rosters in 2019, chances are you probably missed him.

The undrafted rookie highlighted some camp reports and earned a starting role early in 2019. Before DeVante Parker started to break out, it was Williams who often stole the show. In just eight games, he saw 60 targets for 32 catches with 428 yards and 3 TDs. Extrapolated out to a full season, that’s 120 targets for 64 catches with 856 yards and 6 TDs. Week 9 got off to a great start with 5 catches for 72 yards and two touchdowns, but he went on to tear his ACL. Williams may not be a lock to start the season fully healthy, so we’ll see how his recovery plays out. Fantasy owners have already taken that risk into consideration as Williams’ ADP comes in at 137 overall.

A contrarian might say that since Parker broke out, Williams’ ceiling potential isn’t that high.

I interpret this as Parker’s present value and ADP (57) being inflated while Williams’ ADP is overwhelmingly depressed; simply because everybody is stuck on Parker. The second-year wideout is the 50th receiver drafted, making him a bench player in most leagues. You could do a lot worse for your WR5.

We had eight games with a no-name rookie in Williams and he hit the ground running; living up to his preseason hype.

On the other hand, Parker saw all the first-round hype imaginable to start his career. Yet he’s been every kind of mediocre and overrated for years, then managed to get it together for half a year.

So now we crown him? Parker is who we thought he was! If you wanna crown him, go ahead! But we let him off the hook!

Miami Dolphins reporter Alain Poupart aptly points out that when speaking about the Dolphins’ receiver situation ahead of the 2020 NFL Draft, “… Williams, Jakeem Grant, Gary Jennings and Ricardo Louis all ended last season on injured reserve, and Albert Wilson spent much of 2019 trying to regain his form after his nasty hip injury of October 2018.”

So not only did it take four and a half seasons for Parker to show up, the fantasy injury gods laid out the red carpet for him by derailing half the Dolphins’ WR depth chart. No other receiver on the team besides Parker played more than 48-percent of the snaps in 2019.

Now that I’m done dumping on Parker, let’s bring it back to Williams. In training camp, he managed to push for WR1 status and the early reports raved about him. He followed up by meeting the hype when he scored a touchdown in his first game and posting impressive numbers in his limited action.

I anticipate Williams to slowly climb up closer to WR45 range by the time draft season kicks into full gear. Even with that valuation, I remain bullish on him regardless of who sees more playing as the Dolphins starting quarterback.