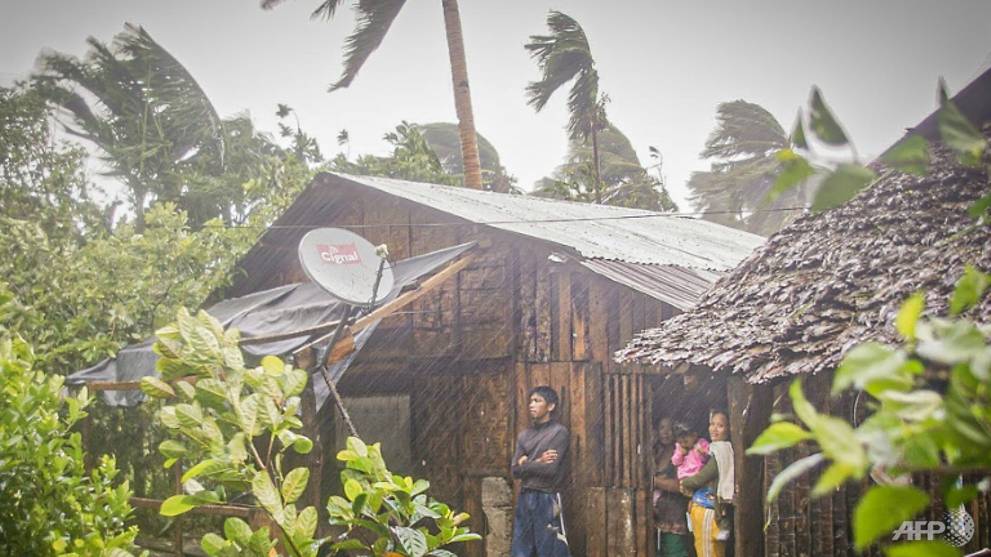 MANILA: Tens of thousands of people crammed into evacuation centres while trying to follow social distance protocols on Friday (May 15), as a powerful typhoon hammered the Philippines.

Typhoon Vongfong has dumped heavy rains and torn off roofs since it roared ashore on central Samar island Thursday, with hundreds of thousands of vulnerable people in its path on the coast or in flimsy homes.

The storm hit as tens of millions of Filipinos are hunkered down at home against the coronavirus, but at least 141,700 have had to flee because of the powerful storm, disaster officials said.

“We have to wear masks and apply distancing at all times,” local police official Carlito Abriz told AFP. “It’s difficult to enforce because they (the evacuees) are stressed. But we are doing our best.”

Authorities have said they will run shelters at half of capacity, provide masks to people who don’t have them and try to keep families grouped together.

However, many spaces normally used as storm shelters have been converted into quarantine sites for people suspected of being infected with coronavirus.

“The challenge really lies in the physical distancing,” said disaster official Junie Castillo, who added they were housing people in classrooms emptied by the pandemic.

Fortunately the central region where the storm struck first is not one of the hotspots of the Philippines’ outbreak, which has seen 11,876 reported infections and 790 dead.

Tens of millions more people live along Vongfong’s path, which is forecast to take it near the densely populated capital Manila later Friday or early Saturday.

However, the national meteorological agency says the typhoon could weaken to a severe tropical storm as it churns north over the Philippines.

Authorities have not reported any deaths so far, but disaster crews were just beginning on Friday their assessment of hard-hit areas cut off by the storm.

It is not unheard of for disasters to overlap in the Philippines, and around 22,000 people were evacuated from the slopes of the active Mayon volcano ahead of the typhoon’s arrival.

Heavy rains in the past have sent landslides of debris cascading down the volcano, burying and killing the communities in their paths.

Typhoons are a dangerous and disruptive part of life in the Philippine archipelago, which gets hit by an average of 20 storms and typhoons each year.

The storms put millions of people in disaster-prone areas in a state of constant poverty and rebuilding.

A July 2019 study by the Manila-based Asian Development Bank said the most frequent storms lop one percent off the Philippine economy, with the stronger ones cutting economic output by nearly three percent.

Many of the areas in Vongfong’s path have already gone through much of their emergency disaster money while responding to the pandemic, and have asked the national government for help.

The country’s deadliest cyclone on record was Super Typhoon Haiyan, which left more than 7,300 people dead or missing in 2013.