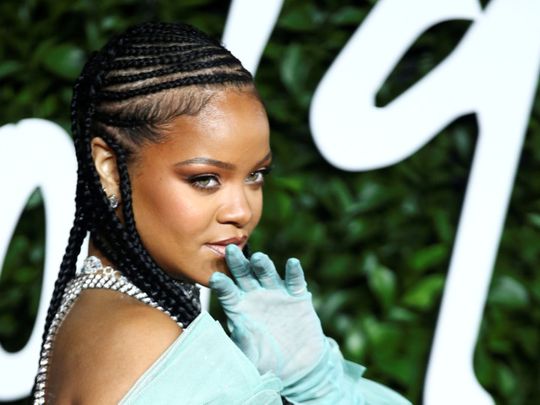 Singer Rihanna scored a new record on Wednesday when she was named as the only female entertainer to feature in the top 10 of Britain’s wealthiest musicians.

The Barbados-born singer, who also runs a list of other businesses, made her debut at number three in the Sunday Times Rich List, with an estimated net worth of £468 million ($575 million, Dh2 billion).

“Rihanna typifies the seismic change we’ve seen in the Rich List in recent years,” said Robert Watts, the compiler of The Sunday Times Rich List, referring to the days when it was largely dominated by white men and inherited wealth.

She came in below veteran earners Andrew Lloyd-Webber and Paul McCartney, making her the third richest musician in Britain where she now lives, but she ranked above Elton John and Mick Jagger.

Only four women appeared in the top 30 of the UK Musicians Rich List, with George Harrison’s widow Olivia placing 6th with her son Dhani, and Adele listed at no 22 alongside Sharon and Ozzy Osbourne.

Eight-time Grammy winner Rihanna, 32, was discovered as a teenager and has notched up 14 number one singles, including ‘Umbrella’, ‘We Found Love’ and ‘Work’.

Rihanna’s wealth has accumulated over the past decade as she branded out into various business endeavours such as cosmetic brand Fenty Beauty, lingerie line Savage X Fenty and fashion line Fenty.

She founded the Clara Lionel Foundation in 2012, named after her grandparents, which is helping to fund initiatives for victims of domestic abuse during the coronavirus lockdowns.