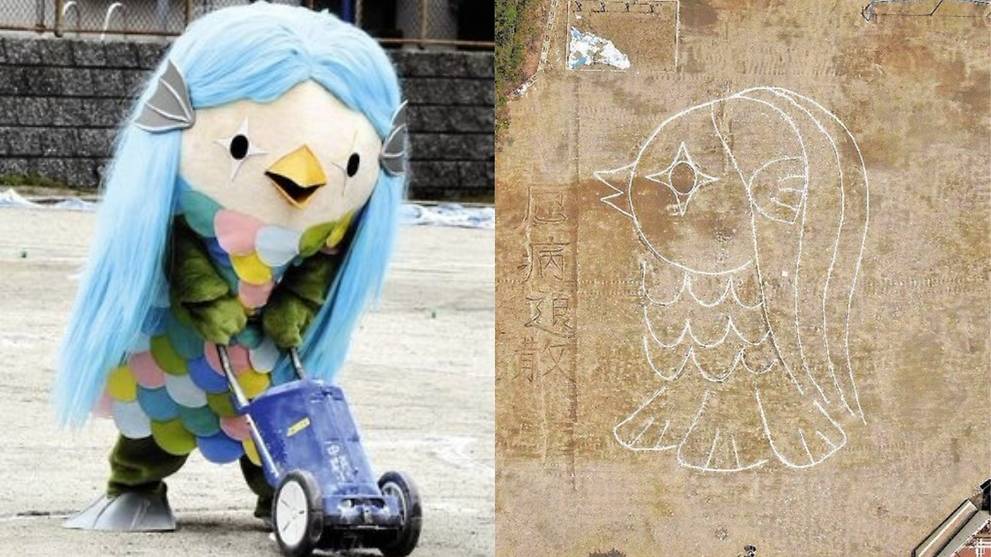 In recent weeks, the mash-up monster has become the unlikely mascot of hopes for an end to the pandemic, emerging from relative obscurity to become a trending Twitter hashtag, as well as the inspiration for everything from cakes to nail art.

Her revival in fortunes was sparked in early March, when the Kyoto University Library tweeted an 1846 drawing of the creature floating above the sea, accompanied by a text explaining her apparent infection-fighting powers.

The scaly social media star is supposed to have appeared to a samurai in southern Kumamoto prefecture, warning of the spread of an infectious disease and instructing him to draw a picture of her and show it to people to protect them.

The post quickly went viral, and sparked the “Amabiechallenge”, with everyone from amateurs to artists posting their renditions of the mythical monster.

The long-locked legend has also sparked on outpouring of creative content, including an udon dish featuring Amabie in the form of a fish sausage emerging from a bowl, with the traditional wheat noodles for her hair.

She has also found herself immortalised in bento form, her body and distinctive beak carved from a piece of luncheon meat and hair represented by thin strips of Japanese rolled omelette.

Amabie is part of a rich pantheon of Japanese mystical monsters called yokai.

Many have faded from popular imagination, but others live on, including in the form of modern-day mascots like the turtle-inspired river monster Kappa, now associated with Tokyo’s famed kitchen street Kappabashi.

Amabie’s recent revival has come as something of a surprise to some yokai experts, including Masanobu Kagawa of the Hyogo Prefectural Museum of History.

“Amabie is not the oldest yokai in Japanese history to warn of an epidemic, so it’s not that important to researchers,” he told AFP, describing others including “Jinja-hime” (shrine princess), who features a woman’s face and a dragon’s body.

But none seem to have captured the imagination quite like Amabie.

At one Japanese cake shop in northern Akita prefecture, a version of her rendered as a traditional wagashi cake in pastel pinks and blues has been flying off the shelves, sales manager Hirohide Kato told AFP.

“This is the first time we’ve made Amabie-themed cakes,” he said.

They can only produce 250 a day, but “they’re so popular they sell out by noon.”

VIDEO: In hopes it will dispel the coronavirus pandemic, a sea lion at an aquarium park in Yokohama draws ‘Amabie’, a long-haired, beak-nosed mythical monster that is believed to repel plagues pic.twitter.com/pNsFsiORYm

And at an aquarium in Yokohama, south of Tokyo, a sea lion who has gained fame for his calligraphy and painting skills has been trained to draw the monster.

“We perform the drawing of Amabie hoping the pandemic of the new coronavirus will come to an end soon.”