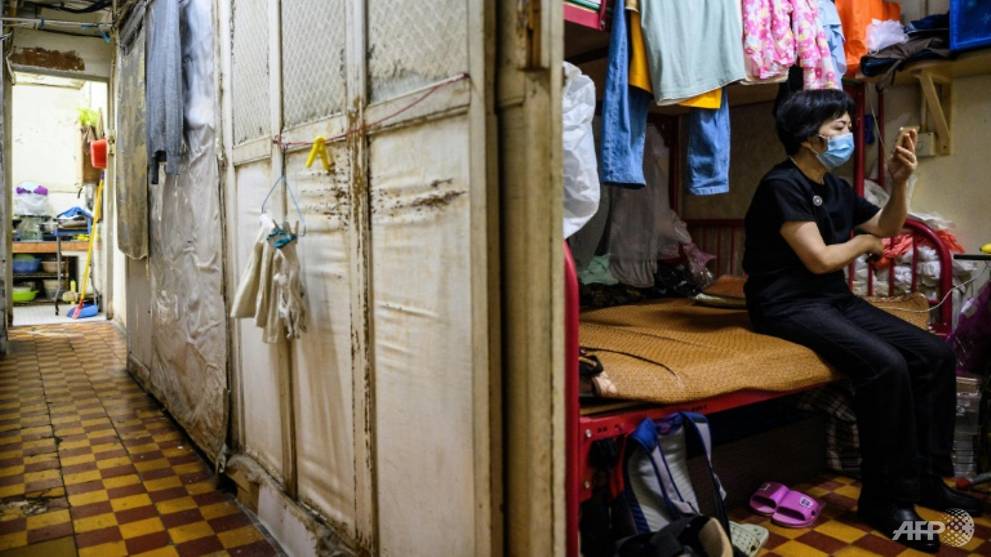 HONG KONG: Squashed inside the 4.6 sq m living space she shares with her son, Wong Mei-ying knows social distancing during the COVID-19 pandemic is all but impossible.

The 70-year-old Hong Konger lives in one of the city’s notorious “cubicle flats” – subdivided apartments that make up some of the most densely packed buildings in the world.

Earlier this week, authorities announced a new local outbreak of the deadly coronavirus in Wong’s neighbourhood – the first local transmission case in the financial hub in nearly a month.

The news has put Wong on edge.

With officials testing hundreds of residents nearby, Wong says she tries to follow the government’s social distancing and hygiene advice. But that’s not easy inside cubicle flats.

“We have 12 people living here,” Wong told AFP, gesturing to the five other cubicles that have been squeezed into the apartment alongside a shared kitchen and shower.

“We have to line up to cook our meals, queue for shower. Around dinner time, the kitchen will be so crowded and every one of us wears a mask,” she added.

Jack Sit from Asbury Methodist Social Services told AFP that subdivided flats were “high-risk” in terms of virus transmission, saying that ventilation and drainage systems were often poor in those buildings.

Wong’s subdivided apartment is located in a crumbling walk-up building with cracked walls. What should be a main living room for a single family contains six cubicles separated from each other by thin pre-fab walls.

She sleeps on the bottom bunk, her 43-year-old son takes the top bed.

On paper Hong Kong is one of the richest cities in the world.

But it suffers from pervasive inequality, an acute housing shortage and eye-watering rents that successive governments have failed to solve.

That dubious accolade belongs to so-called “cage homes”, which are little more than a single bed surrounded by a lockable metal cage.

Wong works at a fast food chain and recently had her shifts cut from six days a week to five as business suffers during the pandemic.

She dreams of having an apartment for just herself and her son, who works in construction.