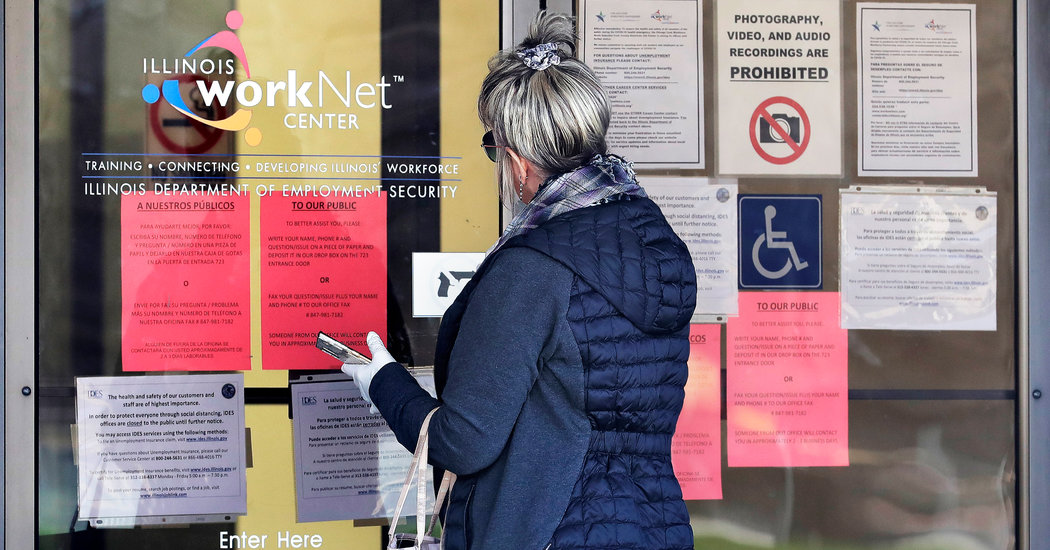 Good morning. Partisan battles over the virus are growing. Rich New Yorkers are fleeing the city. And the U.S. is suffering worse joblessness than other countries.

The fight to save jobs

Almost every country across Europe and North America has put in place some kind of lockdown. But not every country has experienced the sharp increase in unemployment that the United States has.

The latest sign came with the news yesterday that almost three million more Americans filed for jobless benefits last week. The total over the past two months is now 36.5 million. Consider this chart:

What’s striking is that the countries with the smallest increases in unemployment have something in common. Their governments have put in place sweeping programs that directly pay companies to retain their workers.

The details differ. Australia, Denmark and New Zealand created new programs. France and Germany expanded existing programs. But all of them have tried to maintain the connection between employer and employee even as much of the economy is temporarily shut down.

The United States took a different approach, one supported by both Republicans and Democrats. The $2 trillion stimulus program passed in March did include a modest version of the approach other countries are taking. It’s the $350 billion Paycheck Protection Program, which quickly ran out of money because of high demand.

Yet most of the stimulus went to a mix of other programs. The largest was about $300 billion in checks sent to almost every taxpayer making less than $99,000 a year. The typical check was $1,200.

The evidence so far suggests that those checks haven’t been a very effective stimulus. People who have not lost their jobs — still a large majority of the work force — have instead tended to put the money in a bank account or pay down debt, neither of which helps halt an economic downturn.

“Much of the stimulus checks were saved,” Mark Zandi of Moody’s Analytics says. Jonathan Rothwell of the Brookings Institution is harsher: “Most of that money was entirely wasted.” And Jacob Funk Kirkegaard of the Peterson Institute for International Economics told me: “It is clear that E.U. countries have to date done far better.”

Still, many members of Congress continue to favor sending across-the-board checks. Doing so is simple, they say, and it does help people who’ve lost their jobs. The new stimulus bill that House Democrats expect to pass today includes another round of $1,200 checks.

Stimulus politics: Congressional Republicans have created a political problem for themselves by saying there is no “urgency” to passing another bill, Carl Hulse, The Times’s chief Washington correspondent, writes.

1. A virus battle along political lines

Partisan fights over the virus are growing, with Democrats urging caution and Republicans calling for a swift return to normalcy. In Michigan, armed protesters at the State Capitol led officials to cancel the legislative session. And a decision by Wisconsin’s Supreme Court overruling a statewide stay-home order sent people flooding out to bars.

Advice for the workplace: In The New Yorker, Atul Gawande explains how businesses can minimize the virus’s spread when they reopen: by copying what hospitals are doing with their employees. He lists five steps, including requiring workers to log on and confirm that they don’t have symptoms, as a condition of entering the office each day.

2. A leading senator is under investigation

Senator Richard Burr of North Carolina temporarily stepped down as chairman of the Senate Intelligence Committee. On Wednesday, F.B.I. agents seized his cellphone as part of an investigation into whether he sold stocks using nonpublic information about the virus.

A senior Justice Department official told The Times that Attorney General William Barr had signed off on the search warrant. Burr has had a chilly relationship with the White House as his panel investigates Russia’s interference in the 2016 election.

The coronavirus has led to a mass exodus of affluent New Yorkers, according to an analysis of smartphone location data. In some of New York’s wealthiest neighborhoods, more than 35 percent of the residents fled the city in March and April. The citywide average, by contrast, was 5 percent.

But wait: Experts stressed there are likely mundane explanations. One case involved a red weather balloon “released without notifying the appropriate channels.”

5. Scenes from an outbreak in Mumbai

BACK STORY: An Opinion project

Late last year, the editors of The Times’s Opinion section decided to undertake a big project in 2020 focusing on economic inequality. Then came the coronavirus, which made the subject feel even more urgent.

The result is a project called “The America We Need,” and it has been publishing its second round of stories this week. I asked Kevin Delaney, the editor overseeing the project, why this round is looking specifically at cities. His response:

When you’re looking to make the U.S. a better country — and ensure that every child born here has a fair shot at a good job, at being able to afford to raise a family, at living the longest, healthiest life — you quickly start having to think about cities. About 80 percent of Americans live in urban areas and over our history cities have been the nation’s most powerful engines of growth and opportunity.

But, in the past 40 years or so, there’s been a dramatic segregation of rich and poor — they increasingly live in different neighborhoods, are educated separately. They live in parallel worlds really, and that relegates the less-affluent to staying in their own world of precarious and insufficient employment and under-resourced and underperforming schools.

The good news is that there are some solid ideas for fixing this — we’re hoping to advance those, and stimulate other smart approaches.

From the series: The importance of urban density; a look at the spaces that make cities more resilient; and a Times editorial on the cities that America needs.

The search for curry leaves

Like many Americans, I fell for Indian food through versions of the dishes from Northern India. That’s what most Indian restaurants in the U.S. serve: naan, soupy curries and the like.

My first experience with southern Indian food, on Chicago’s Devon Avenue, was a revelation. The vegetarian-dominated food combines freshness, spice and — thanks to partially cooked lentils — crunch. It’s also easy to cook at home, as Chandra Padmanabhan has explained in her cookbook, “Dakshin.” Another option: try homemade dosa.

But there is one challenge. Many grocery stores don’t carry curry leaves, a south Indian staple. Which is a good excuse to tell you about a New York food market that has an online store for lockdown shopping: Kalustyan’s. As our Cooking colleague Alexa Weibel says, it’s a “one-stop shop for spices and hard-to-find ingredients” — including dried curry leaves.

This weekend, watch … something ‘absolutely bananas’

Every Friday, Gilbert Cruz, The Times’s Culture editor, is offering recommendations for stuff you should watch. Today, he chose the post-apocalyptic thriller “Mad Max: Fury Road”:

“I probably should watch ‘Mad Max: Fury Road’ every year given how singular and impressive it is. (Maybe we all should.) I was spurred to do so this week, though, by a massive oral history of the film’s production by The Times’s Kyle Buchanan.

“Starring Tom Hardy and Charlize Theron in intense, nearly wordless performances, ‘Fury Road’ remains an absolutely bananas action movie — large vehicles, driving fast across the desert, exploding, flipping, crashing, people jumping between, over and in front of said vehicles — that is completely engrossing. I laugh and cry during movies all the time. But it is rare for me to just sit there, agape, mimicking the open mouth emoji for two hours.”

Thanks for spending part of your morning with The Times. See you next week. — David

P.S. The new episode of the “Still Processing” podcast asks what we can learn from dystopian and utopian television shows — like “Westworld” and “Hollywood” — right now.

Today’s episode of “The Daily” includes an interview with a restaurant owner in Louisiana, where a stay-at-home order is ending.

Lauren Leatherby, Ian Prasad Philbrick and Sanam Yar contributed to The Morning. You can reach the team at themorning@nytimes.com.