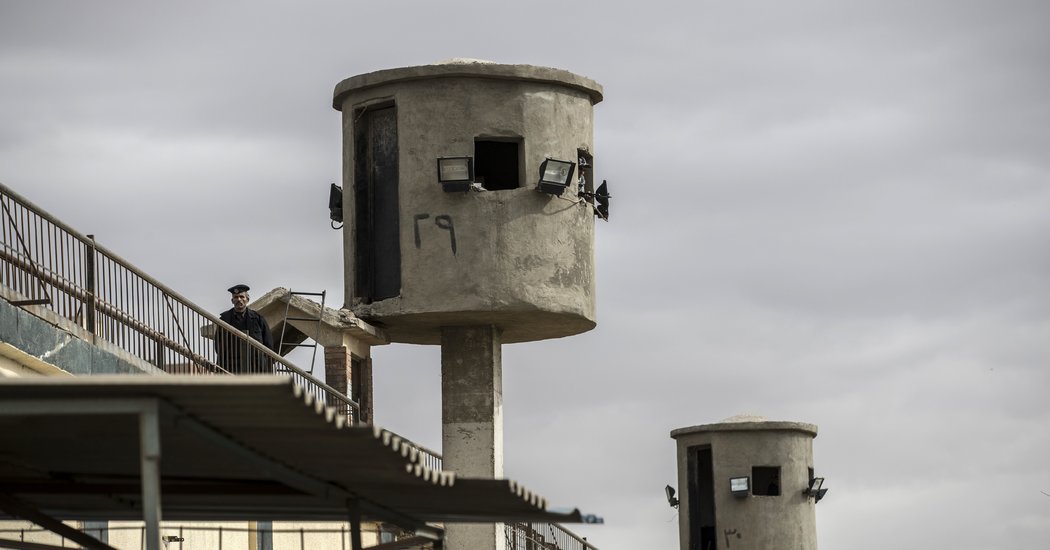 CAIRO — When a popular Egyptian blogger shared gruesome video of a military officer severing the finger of an unidentified body and setting the body on fire, it was some of the most shocking footage to emerge from Sinai, where Egypt’s military has been battling Islamist militants in a hidden war.

As an exiled dissident, Abdullah el-Sherif could afford to be bold enough to broadcast the video in March. But days later, security agents burst into the homes of his relatives in the seaside city of Alexandria and arrested his two brothers on terrorism charges.

Now Mr. el-Sherif is in Qatar, safely beyond the reach of Egypt’s security forces, while his brothers languish at a maximum-security prison outside Cairo.

The Egyptian government, which has stifled nearly all criticism at home, is now trying to silence critics abroad by jailing their family members in Egypt, human rights groups say. Since early last year, it has arrested the relatives of at least 15 dissidents in exile.

Security agents have broken down front doors, confiscated money and passports, forced parents to denounce their children on television, and detained fathers and brothers, several of whom have been charged with terrorism and imprisoned.

“It’s nothing less than collective punishment,” said Amr Magdi of Human Rights Watch, which since 2016 has documented raids on the families of 14 exiled dissidents. At least 20 relatives have been detained or prosecuted.

Mr. el-Sherif, whose YouTube videos often amass two or three million views, said Egyptian officials told him that if he stopped his critical broadcasts, his brothers would be released.

“I feel really bad,” he said. “I’ve lost my appetite. My mother and father call all the time, crying on the phone, asking me to quit. I don’t know what to do.”

The head of Egypt’s State Information Service did not respond to a request for comment.

Egypt’s rulers have long employed such tactics against the families of suspected drug traffickers and jihadists. But as President Abdel Fattah el-Sisi has cranked up the repression in recent years, he has broadened his focus to target the families of exiled dissidents, journalists and cultural figures.

One recent case involved an exiled actor, Mohammed Shuman, who delivered an emotional appeal on Facebook from Turkey for the release of his brother and his son who, he said, had been jailed in retaliation for his role in a movie that highlighted police brutality.

Inside Egypt, Mr. el-Sisi jailed opponents and largely subjugated the news media. His intelligence services have acquired stakes in the largest private TV networks, blocked over 500 websites and even censored the scripts of the highly popular TV serials that Egyptians are currently lapping up during the holy month of Ramadan.

But his iron grip on Egyptian media may have inadvertently helped raise the profile of news outlets and bloggers based abroad.

Egypt’s nominally independent private TV stations all offer similar, pro-state news and commentary. Talk show hosts seem to sing from the same hymnal. News bulletins can have a whiff of Soviet-era control, while government critics are branded as agents of the outlawed Muslim Brotherhood, or stooges of rival Qatar.

When the Muslim Brotherhood leader, Mohamed Morsi, died in June, every Egyptian TV station led with the same 42-word bulletin, evidently dictated by the security agencies.

Egyptian viewers, bored with the homogeneous programming or in search of unfiltered news, are increasingly turning to foreign media as an alternative.

In addition to YouTube channels like Mr. el-Sherif’s, there is anecdotal evidence that many Egyptians quietly tune into opposition TV stations like Turkey-based Mekameleen, which is sympathetic to the banned Muslim Brotherhood, and Al Sharq.

“The regime is handing a present to its Islamist opponents,” said Ezzedine C. Fishere, a lecturer on Middle East politics at Dartmouth College. “If all the TV channels say the same thing, and all the newspapers have the same headline, you need at least someone who is making a joke about the president or the regime. And they find it in these outlets.”

It was YouTube videos by Mohamed Ali, a disgruntled construction contractor living in Spain, that set off protests in Cairo in September against the palaces Mr. el-Sisi is building for himself across Egypt.

Mr. el-Sherif, the video blogger, stoked the outrage with a leaked video taken inside a palace under construction in El Alamein. Several weeks later, security agents forced Mr. el-Sherif’s father to publicly denounce him on television.

“Those who are unhappy with what he is saying are upset with us, too,” said Mr. el-Sherif’s father, Muhammad el-Sherif, fighting back tears in footage broadcast on pro-state channels. “We are just ordinary people.”

The government has dismissed Mr. el-Sherif’s slick broadcasts as little more than agitprop sponsored by its enemy, the outlawed Muslim Brotherhood, and its foreign rival, Qatar. Mr. el-Sherif said he financed his work through his job as an editor with an Arab TV station, which he declined to name, and through audience revenues from YouTube.

Relatives of opposition TV anchors have been subjected to similar tactics.

Haytham Abokhalil, an anchor with Al Sharq TV in Istanbul, aired leaked photos of Mr. el-Sisi’s wife and sons in October. Days later, security agents dragged his brother, Amr Abokhalil, a psychiatrist, from his clinic as patients watched. Dr. Abokhalil is now being held in prison.

“My brother doesn’t even approve of my work,” said Haytham Abokhalil, who described himself as a former member of the Muslim Brotherhood. “His arrest is a punishment, a message that what I am doing has a price.”

Mr. el-Sherif said he recently learned that an Egyptian court had sentenced him to life imprisonment because of his YouTube broadcasts. It was “painful” to know that his brothers are in the country’s main maximum security prison on his account, he said. But he doubted that, even if he were to quit his broadcasts, they would be released.