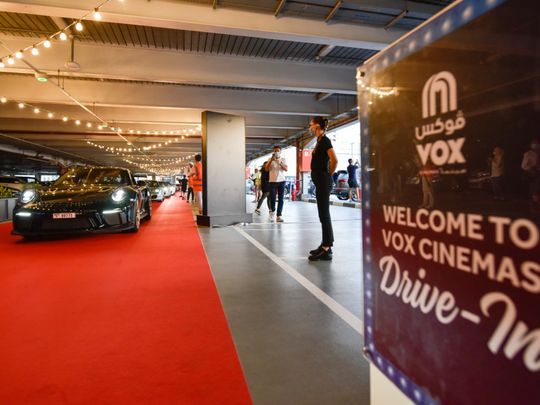 Dubai finally rolled out the red carpet (literally) to welcome the first patrons of its new drive-in theatre by Vox Cinemas at Mall of the Emirates on Wednesday.

While the movie itself (‘Bad Boys for Life’, for the curious) left a lot to be desired, the drive-in concept — located on the third level of the mall, near Ski Dubai — itself was welcomed with an unquenchable thirst as people regaled a monsoon after months of a parched entertainment landscape.

The media preview was limited to a handful of journalists, but Sunday’s grand opening is sure to witness a throng of cars driving up to enjoy a movie screening months after cinemas across the UAE shut in light of the restrictions implemented to combat the spread of the coronavirus pandemic.

Cameron Mitchell, CEO of Majid Al Futtaim – Cinemas, told Gulf News that the idea was born following feedback from customers themselves, who have been craving an outlet that allowed them a few hours of entertainment from the gloom and doom of the pandemic, while maintaining social distancing.

“Our customers have been telling us how much they miss the unique and immersive experience that we offer at Vox Cinemas so we’re delighted to collaborate with Mall of the Emirates to launch an innovative way for them to watch movies the way they were intended — on the big screen,” Mitchell said. “With the gradual easing of restrictions on people’s movement, it’s also the perfect opportunity for people to safely enjoy the big screen experience again with a family member.

“We developed the concept in response to the temporary closure of cinemas, and in support of the government reopening parts of the economy in a safe manner and look forward to welcoming our valued guests once we open.”

Residents of Dubai from the 80s and early 90s would recall the city’s Rex Drive-In Cinema in Mirdif, on Al Khawaneej Road, which was a popular spot for moviegoers, showcasing Hollywood and Bollywood films.

Families would pack up a picnic of home-cooked snacks on Thursday, pile into their cars and drive down the dusty road to Rex for a late-night Bollywood potboiler.

According to several old-timers, Abu Dhabi also boasted two open-air cinemas back in the day, with Al Mariah that screened Indian movies from the 80s, while Andalus Cinema showcased Iranian films.

As the multiplex culture gradually started to take over with the onset of malls in the UAE, single-screen cinemas such as Rex Drive-In, Al Mariah and even indoor juggernauts such as Strand and Plaza in Dubai, and El Dorado in Abu Dhabi, closed their shutters due to lack of demand.

After these theatres were phased out, it would be another few decades before the open-air concept would return to the UAE in cooler climes, with set-ups such as the Urban Outdoor Cinema at the Habtoor Grand Resort in Dubai, with Vox Cinemas itself rolling out its outdoors concept theatres at the Galleria Mall in Dubai, followed by one at the Aloft Deira City Centre.

Despite the seasonal demand for such outdoor concepts, along with the occasional pop-up along the way such as last year’s drive-in set-up on Abu Dhabi’s Al Hudayriat Island, the track has never been cleared for something akin to Rex returning to the UAE up until now. Mitchell doesn’t rule out expanding on the concept further in the UAE and maybe even Saudi Arabia.

“At present we are launching the concept at Mall of the Emirates, but given our desire to continue to create great moments for our customers, additional drive-in experiences will be considered in the future based upon the success of the concept in Dubai,” Mitchell confirmed.

Meanwhile, those who want to enjoy the show with cinemas still shut can do so as the cinema opens it doors to vehicles.

“Vox Cinemas Drive-in will feature a big screen that is 19.5 metres long and 8.4 metres wide. It is also raised four metres above the ground to ensure that all guests have a clear view of the movie,” Mitchell described the moviegoing experience. “Once parked, motorists will be instructed to tune into a dedicated radio station frequency (VOX 87.6 FM) to receive the movie audio straight into their vehicles.”

In the future, Mitchell touched on the possibility of expanding on the drive-in concept to make more room for people in better weather through chairs and bean bags.

“[Currently] to minimise movement during the screening, guests are required to remain inside their cars for the duration of the movie with the exception of using the restrooms. We will continue to evaluate both the situation of the COVID-19 pandemic and the success of the experience before making a final decision on its future, given our desire to continue creating great moments for our customers,” added Mitchell.

When quizzed about the reopening of cinemas in general in the UAE, the industry head added: “We continue to follow guidance from the relevant authorities in each of the markets where we operate. As a responsible business, we will make decisions around the operation in the best interest of our employees and guests and in line with government protocol.”

-The Vox Cinemas Drive-in at Mall of the Emirates officially opens on Sunday, May 17.

-It is located on the Level 3 parking of the mall, next to Ski Dubai.

-A maximum of two people are permitted per car and the ticket price includes access to the movie as well as an F&B package for two people consisting of caramel popcorn, salt popcorn, nachos, M&Ms, soft drinks and water.

-Tickets can be booked via the Vox Cinemas’ website and app, which will be updated every Monday with showtimes. Audience members will receive a QR code, which will be scanned by staff to gain access to the screening.

-Screenings will be held in the evenings at 7.30pm

-The capacity of the Vox Cinemas Drive-in is 75 cars.

-Those who need the a/c are advised to keep it on recirculate to keep the car cool and puts less load on the vehicle.

-Age restrictions are currently in place in line with government regulations. Individuals above the age of 60 and children between the ages of three and 12 years of age are not permitted to access the mall and the drive-in cinema experience.

-To hear the movie, patrons can tune into a radio frequency.

-Bathrooms are located inside the mall.

New drive-in venue by Vox at Mall of the Emirates in Dubai. The drive-in concept by Vox Cinemas comes as people are being encouraged to maintain social distancing to curb the spread of the COVID-19 virus that has affected global economies, curbed travel and paralysed the entertainment indusrty. 13th May 2020. Photo: Ahmed Ramzan/ Gulf News
Image Credit: