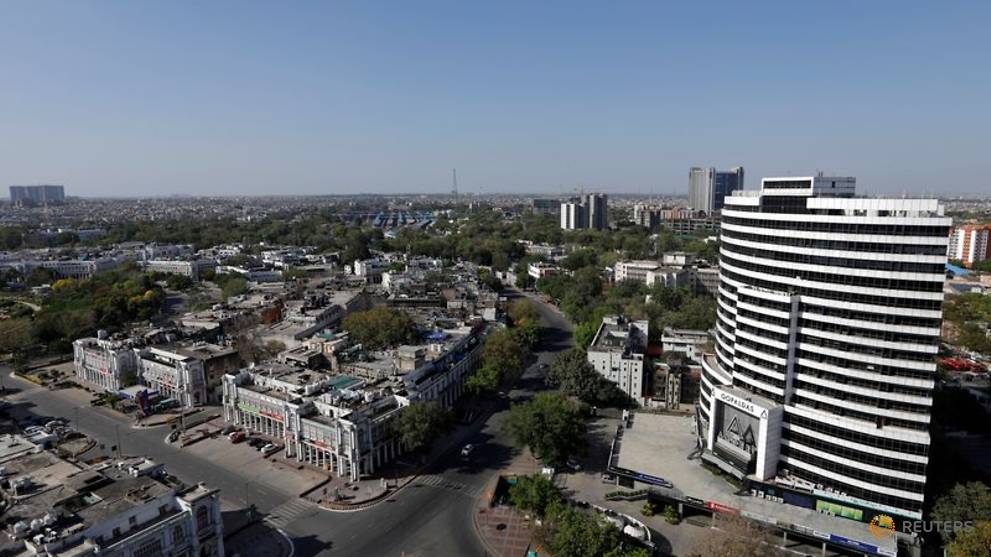 DELHI: In the past few weeks, Delhi has experienced what it has not breathed and seen in years: Cleaner air and blue skies.

It is something that had “seemed impossible to achieve”, according to Tamseel Hussain, co-founder of Let Me Breathe, India’s largest online platform dedicated to pollution-related stories.

He has the COVID-19 lockdown on the city to thank for his lungs feeling “lighter”. The reduced noise pollution from traffic also allows him to hear the chirping of birds.

“Apart from this, many parts of India have reported witnessing mountain ranges that weren’t visible previously,” he told CNA Insider over WhatsApp.

Before this lockdown began on March 23, he had spoken to CNA about his city’s toxic air instead, on the programme Undercover Asia. (Watch the episode here.)

Just in November, the air in the world’s most polluted major city had turned deadly again: Air quality was in the hazardous range for nine days straight. But now, Delhi is having its longest spell of clean air on record.

The lockdown has been extended to May 17, with some easing of restrictions, and could even continue beyond that. Once it ends, however, can India’s movement for clean air ride the momentum of the lockdown effects?

READ: India extends lockdown for two weeks, with some easing

“Realistically speaking, it’s difficult. Prioritising the economy would require opening up and the functioning of all sectors, so there’s a chance that after the lockdown is lifted, we might lose these blue skies,” said Tamseel.

“Still, this is a strong opportunity to focus on long-term solutions and ensure cities prioritise sustainable living and development. A lovable and livable city is a plus to the economy too.”

Whether the respite is short-lived or not may well depend on the government and even the courts, among others.

‘I COULDN’T TAKE MY KID OUTSIDE’

During the first 25 days of the lockdown, Delhi’s concentration of PM2.5 already indicated a “good” rating, which is the safest level.

PM2.5 and PM10 refer to particulate matter not more than 2.5 and 10 micrometres in diameter. Particles within this range make up a large proportion of dust that can enter the lungs or be trapped in the nose, mouth or throat.

They are among the air pollutants in Delhi that, a few months ago, sent families seeking greener pastures — like Vaibhav Wardhan’s family, one of various stakeholders affected by the fight for cleaner air who spoke to Undercover Asia.

Vaibhav grew up in Delhi, so it is where he believes he belongs.

After landing a role in supply chain consulting with an American multinational, he and his wife, Nishu, moved from Hyderabad to their new home in Delhi in April 2018, excited to begin a fresh chapter of their lives.

Eight months later, their first child was born. But everything changed after that, with the deadly November air. “I couldn’t take my kid outside my home. It was as if he was under house arrest,” said Vaibhav.

“It was very difficult to see him not being able to sleep properly,” added Nishu. “We used to wake 10 or 20 times at night … Since I couldn’t take him outside, he used to be very cranky.”

Vaibhav refused to let his child grow up in a city enveloped by dust and smog, so he began looking for opportunities outside Delhi. The family eventually moved back to Hyderabad.

The air pollution that drove them out of Delhi is nothing new, but its escalation in November has been linked to the neighbouring states of Punjab, Haryana and Uttar Pradesh.

Every winter, more than two million farmers in these states burn about 23 million tonnes of paddy straw on more than 80,000 square kilometres of land, even though stubble burning has been banned since 2015 by an Indian court dedicated to environmental matters.

Farmers can be fined up to 15,000 rupees (S$280) for flouting the law. But farmers like Sukhvinder Singh have little choice, as they must “feed (their) children”.

Dharmendra Singh, another farmer in Punjab, said they used to plant rice in May so they had enough time to harvest the crop.

But to save groundwater, the government passed a law in 2009 that forbade rice planting before June 15. This pushed back the rice harvest season from September to October, which means less time to clear the fields.

“The gap between harvesting and sowing … became shorter,” said Dharmendra. “The stubble had to be burned immediately … (so) the wheat crop can be grown.”

No matter when the farmers plant their rice, they risk getting fined for breaking either law.

One proposed solution is the Happy Seeder, developed by the Punjab Agricultural University. Mounted on a tractor, it helps farmers to plant wheat without having to clear the leftover paddy straw.

But the farmers’ enthusiasm has been dismal for three main reasons: Tradition, cost and time.

Farming is an old profession, and farmers are not confident that new methods like the Happy Seeder will deliver the same yield, which would affect their income, said research fellow Karthik Ganesan from the Council on Energy, Environment and Water.

Moreover, each Happy Seeder costs about 150,000 rupees, and government subsidies are not enough to win over farmers.

Even when the government of Punjab wants to pay farmers not to burn their stubble and to use more Happy Seeders, these payments have been slow.

“Our village has farmable land of 800 acres, and we have two Happy Seeder machines,” said Dharmendra.

On top of all this, climate and geography exacerbate the impact of crop burning. Delhi is landlocked and flanked by mountains, so the slow wind movement during winter traps the smoke in a deadly shroud over the city.

What is more pertinent than agricultural burning, which happens for 20 to 30 days, is that Delhi is blighted by the worst vehicle emissions in India, according to a 2018 study by Delhi-based think-tank Centre for Science and Environment.

In January 2016, the Delhi government introduced the odd-even policy: Odd-numbered licence plates are allowed on the road one day, and even numbers the next day. It was again implemented last November after the city declared a public health emergency.

On a daily basis, however, the government uses a Pollution Under Control (PUC) certificate to regulate vehicle emissions, with the idea of keeping older, dirtier vehicles off the streets. Without the certificate, drivers could be fined up to 10,000 rupees.

But this measure has loopholes. In Tamseel’s experiment as a citizen journalist, he managed to get an authentic certificate for a car that failed its emissions test at another facility.

All he did was use a photo of the licence plate and an expired PUC certificate.

The downside is these schemes affect only vehicles registered in Delhi. A large percentage of air pollution spews from diesel trucks and buses that come from outside the city’s borders — and beyond the reach of its laws.

“We plan to nearly double the entire bus fleet in the next couple of years,” Dialogue and Development Commission of Delhi vice-chairperson Jasmine Shah said on what else is being done to tackle the emissions problem.

“We’re also working on affordability … Bus travel (is) free for women, and we’re also planning to make it free for students … This will ensure that more and more people shift from private vehicles to public transport.”

LOOKING TO THE COURTS FOR SOLUTIONS

On the ground, environmental activists like 16-year-old Aditya Dubey are trying to eradicate Delhi’s air pollution crisis one step at a time.

The effects of air pollution have taken a toll on his body, causing him to wake up in the middle of the night with breathlessness, a symptom other students have experienced too.

Besides using Twitter to call the authorities out on their inaction, he filed a Public Interest Litigation in November on behalf of Delhi’s millions of schoolchildren.

Separately, on his platform Let Me Breathe, Tamseel carries out his own investigations into Delhi’s problems — and possible solutions — and makes these available online. But activists like them need the backing of a Supreme Court order to see significant change.

Aditya’s case was taken on by Aparajita Singh, who has litigated cases on pollution and environmental protection for over two decades now.

“When we’re talking specifically about air pollution, it’s covered by Article 21 of the constitution, which is the right to life — and that’s the most fundamental provision,” said the senior advocate at the Supreme Court.

The activists also seek a Supreme Court order to be enforced on Delhi, Punjab, Haryana and Uttar Pradesh to clean up Delhi’s air. But the four chief secretaries were no-shows on the day they had to present their action plans.

It might be disheartening, but Tamseel has decided to keep helping people upload pollution and climate change stories using their mobile phones.

“The media might move on, politicians might keep (playing) the blame game … sensational news will keep happening, but you know what doesn’t change is (the) citizen’s voice,” he said. “Citizens’ voices asking for positive change have a long-lasting impact.”

CHANCE FOR A FRESH START

Since the Undercover Asia episode was aired, Tamseel has some suggestions on how the government can ride the wave of the environmental benefits of the COVID-19 lockdown.

Seeing how “beautiful and healthy” life can be with “next to zero cars on the road”, he wants the government, institutions and citizens to work together. The government, for instance, can use “powerful public engagement techniques” to ensure lasting behavioural change.

“We need to limit vehicular traffic. The push for electric mobility needs to be amplified. Industrial emissions need stricter control. And cities can look at a more accessible plan when it comes to public transport,” he said.

“The lockdown also highlights challenges in interstate travel, so this is a great opportunity to fix a robust and sustainable travel system between states.”

Then, if the air pollution finally abates, families like Vaibhav’s would not need to leave the capital any more just to give their children a fighting chance to breathe clean air.