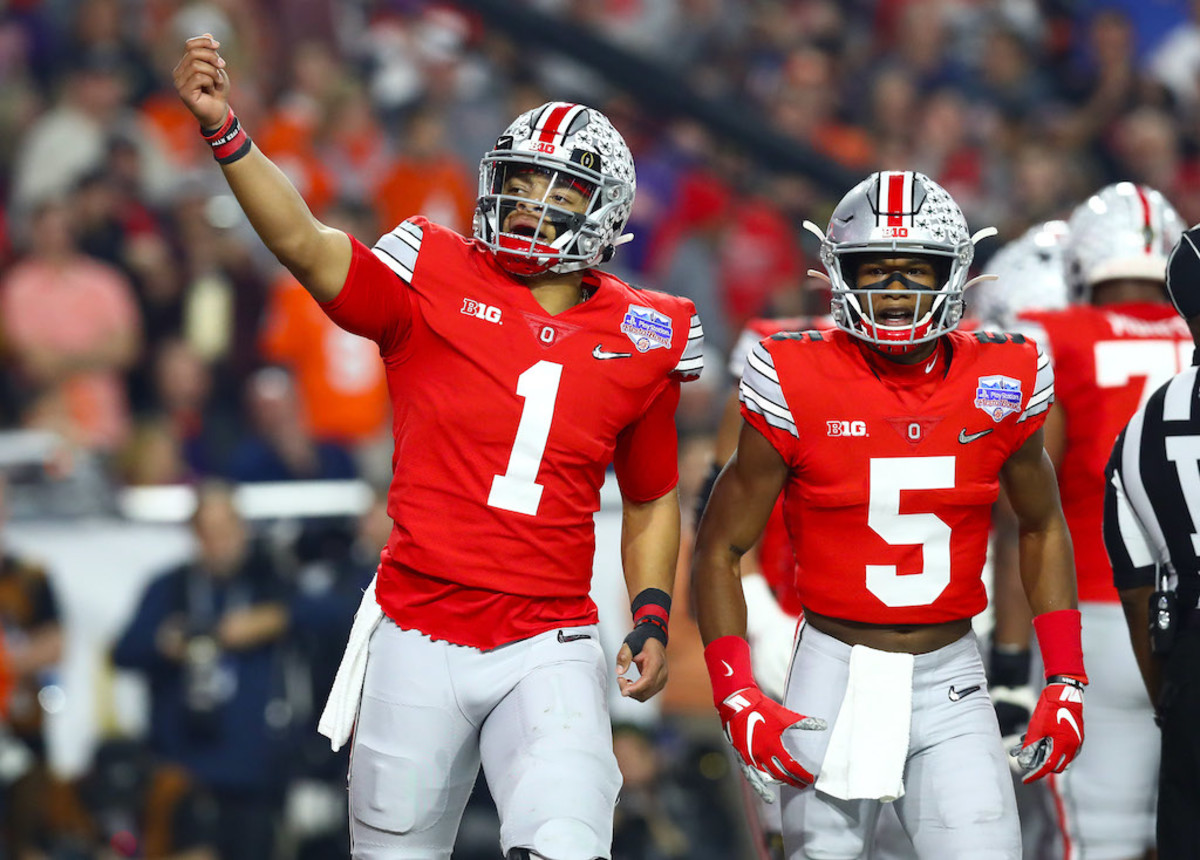 Following a 13-1 season that resulted in a third straight Big Ten championship and a berth in the College Football Playoff for the first time since the 2016 season, the expectations are high in Columbus in 2020.

Justin Fields, the favorite in Heisman Trophy betting odds, returns for another year as Ohio State’s signal caller. Buckeye Maven Bruce Hooley tackles if a summer without football due to COVID-19 guidelines could hinder Fields’ development.

The Buckeyes will have a gaping hole in the ground game following J.K. Dobbins’ early departure for the NFL, leaving Master Teague III as the probable starter. Fields will also no longer have the services of wideout K.J. Hill, who recorded the most receptions in school history. The prolific wide receiver was drafted in the seventh round by the Los Angeles Chargers.

In addition, on defense they need to find a way to replace the production of both star defensive end Chase Young and shutdown cornerback Jeff Okudahm who were drafted early in the first round of the 2020 NFL Draft.

The oddsmakers have Ohio State listed with a projection of 11 wins, juiced moderately to the over at odds of -134.

It’s no surprise that their 2020 season win total odds have them heavily favored to find themselves in position for another National Championship. The oddsmakers are not leaving much room for error as this market demands an 11-1 campaign just to push.

In 2019, the Buckeyes posted a perfect 13-0 record with an average margin of victory of 33 points (which led the country) while beating five ranked teams on their way to the College Football Playoff. It was an impressive start to Ryan Day’s head coaching career, and the expectations for a National Championship in his second year are immense.

An early look at their 2020 schedule shows a tough out of conference road matchup with powerful Oregon in Week 2. However, the oddsmakers have them as strong 9.5-point favorites going into Eugene. Another tough road game will take place in Week 7 when they go on the road to face Penn State. Once again, it should be noted that the oddsmakers have installed the Buckeyes as 6.5-point favorites over their Big Ten foe. Finally, they wrap up the season with easily their biggest rival, the Michigan Wolverines. The boys in the desert don’t envision any upset at the Horseshoe with Ohio State an early 11.5-point home favorite.

If you prefer the Buckeyes’ odds of being the class of the Big 10 in 2020, this market comes with a steep price. The -230 requested here will surely tie up larger funds available to any manageable betting bankroll.

The oddsmakers have Ohio State listed as the second-most likely squad to be a playoff team in 2020, behind only Clemson (-670). It should be noted that only three schools listed in this market come without plus-odds on the “Yes” (Clemson, Ohio State and Alabama).

After diving in deeper, I believe it’s fair to land on a 2020 regular season projection of a 12-0 or 11-1. I do believe odds of 3/1 to win the College Football Playoff offers value to attract a wager thanks to the ability and experience of Fields under center. Winning the Big Ten (-230) appears to be a solid investment as well, however due to my disdain for laying heavy chalk, laying this kind of juice is not something I am comfortable doing when one ‘hit’ could sideline Fields at any time.

If you believe in Ohio State making it to the National Championship, that means you believe in Fields being the one who leads them there. I would prefer to back the star quarterback in the Heisman market at +350 as opposed to the lower return of 3/1. Plus, there’s always the added risk of needing to beat Clemson and Trevor Lawrence in order to cash the ticket.