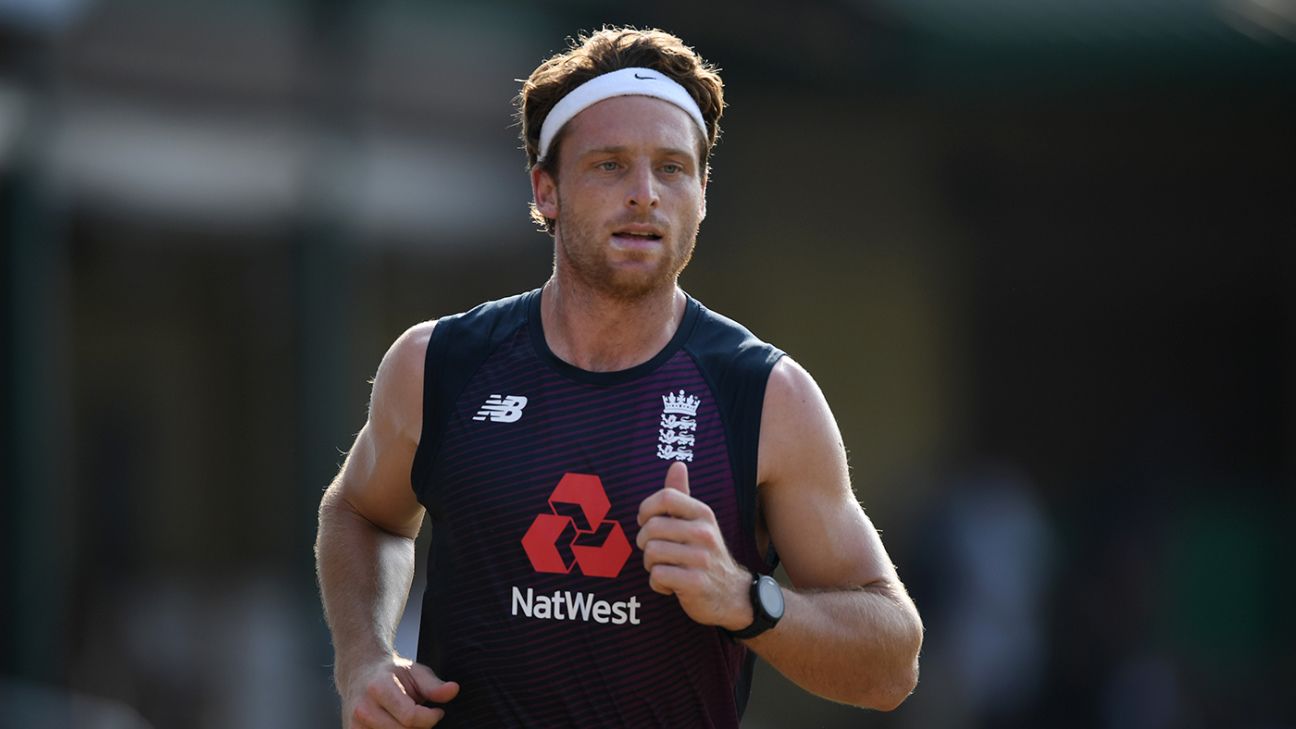 Jos Buttler has conceded that it would be “completely natural” for players to be apprehensive about returning to action behind closed doors while the UK is still coming to grips with the coronavirus outbreak, and said it had been made clear by the England management that personal decisions around safety would be respected.

Buttler also touched on the subject of “performance anxiety”, as he and his team-mates attempt to get themselves in the right physical and mental shape for a truncated summer of cricket, with the ECB looking to salvage as much of its international calendar as possible. He suggested that those involved in matches played behind closed doors would need “coping strategies for the different scenarios we’re going to come up against” – a reminder that welfare provisions will need to extend beyond simply trying to mitigate against the spread of Covid-19.

England’s players have been well briefed throughout the UK’s lockdown period by Ashley Giles, the managing director of England men’s cricket, and medical officers Nick Peirce and Gurjit Bhogal, and several have voiced their trust in the process of getting back on the field. The next significant steps are likely to be taken in the coming days, with players given individualised training programmes.

As part of the phased return of professional sport in the UK, government guidance was published on Wednesday stating that elite athletes must be free to opt out of the return to training without fear of “unreasonable steps being taken against them”.

Concerns have been raised by some Premier League footballers about the rush to restart their season in the coming weeks, but Buttler said he had “complete faith” in the ECB’s medical advice. Should anyone wish to opt out of England duty, however, there is recent precedent to fall back on – in 2016-17, Eoin Morgan and Alex Hales both decided against touring Bangladesh due to security concerns (Buttler captained the team in Morgan’s absence), only to subsequently return.

“I think that’s been made clear from Ash and Gurj and Nick Pierce, who have all been great at communicating with us, that the safety of the players is going to be paramount to any cricket being played and if you don’t feel comfortable then that is your own decision,” Buttler said.

“I think it’d be very fair to say that if someone had reservations about playing, or didn’t feel comfortable for certain reasons, be that affecting their family or however that looks, I think in these times that wouldn’t be held against you.

“I’ve got complete faith in the medical team, they’ve been brilliant about discussing everything with us as players and giving us clear information about how they look to implement things to get back to playing.”

West Indies are expected to be England’s first opponents, with a planned three-Test series being pushed back into July, and it has been reported that their players would be given the option of declining a spot on the tour.

“I’m sure they’ve been having discussions,” Buttler said. “Individually, it’ll look different for each and every player and I’m sure all those voices will be heard. I think it would be completely natural to have some apprehension and anxiety about it and lots of questions to ask. In similar situations, like going to Bangladesh, you talk it over with your family a lot, you talk as players and I think you just have to come to a decision that’s right for you. I’m sure no player would be under pressure to do something they didn’t want to do.

“I know that’s been made clear to England players – if you feel uncomfortable about anything you can speak to the doctors, speak to Ash, and you’re not being forced into anything you don’t want to do. So, ultimately, it’ll come down to you as a player and of course they’ll be having those discussions about what it looks like to them as a side.”

While Buttler said the unexpected break in cricket’s crowded programme had left him feeling refreshed, the challenge of preparing for Test cricket after several months without competitive action is likely to be a significant one. England’s last outing was an aborted warm-up match in Sri Lanka in mid-March, and most players have barely picked up bat or ball while enduring seven weeks of lockdown back in the UK.

Buttler’s position in the Test team was under considerable scrutiny when England left for Sri Lanka, with Ben Foakes included in the party and question marks over the wicketkeeping role, and he admitted that the thought of playing again in such unusual circumstances was somewhat daunting.

“I think for me, it was yesterday or the day before reading in the paper training could be starting again for England players, I had some natural apprehension and anxiety about that,” he said. “I don’t really know necessarily why. I think probably it was natural performance anxiety you haven’t felt for seven weeks, you’ve had freedom from that. There’s lots of different feelings. How will it look? What will my cricket look like?

“I think because we’re not going back to cricket as we know it, it’s all very new and very much step-by-step at the moment. People can only give you week-by-week assurances, so that makes it very difficult to plan. So anytime there’s uncertainty, speaking for myself, you have natural apprehension and I think it’ll take me a few days to sort of work out those feelings and work out the process for me of how I can control that.

“Say we progress and get into playing some cricket, it’s going to be different and behind closed doors, [so] I think it’s important for all the players to have coping strategies for all the different scenarios we’re going to come up against.”