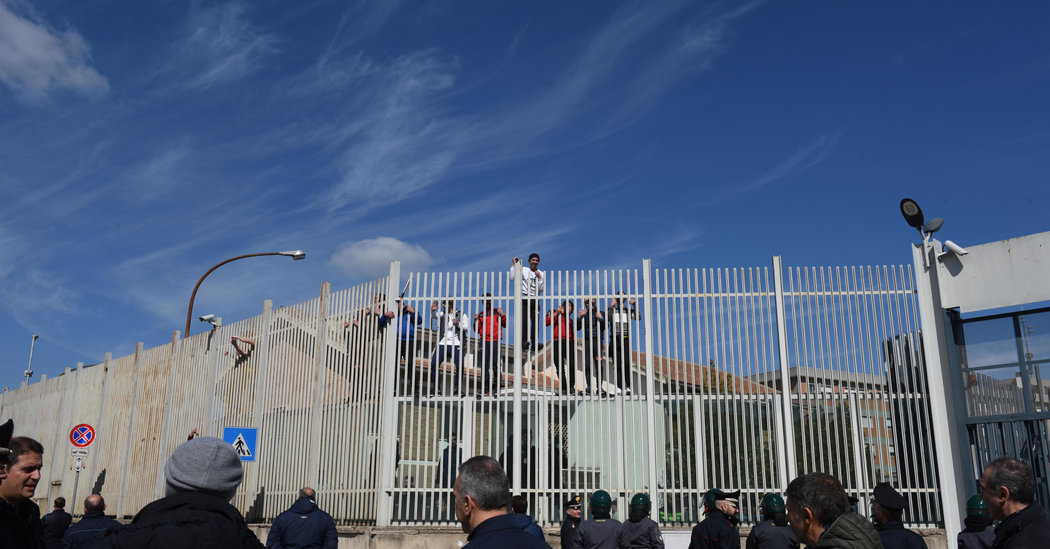 ROME — They were among the most vulnerable as the coronavirus roared through Italy: older or riddled with serious underlying medical conditions. A brush with the virus within the confines of the place where they woke up each morning might seriously threaten their lives.

They were also maximum-security inmates, international drug traffickers and affiliates of Italy’s organized crime gangs, including three who were serving time under a harsh isolation regime that is reserved for top Mafia bosses.

So when news broke last week that 376 inmates had been moved from their high-security prison cells to house arrest because of coronavirus concerns — and that hundreds more were seeking to do the same — the backlash was almost immediate. Even as the coronavirus dominated the news cycle, the homecoming of convicted organized crime figures made front page news.

The house arrests also revived the debate over Italy’s chronically overcrowded penitentiaries, where more than 60,000 prisoners are detained in a system designed to hold 46,875, taxing its ability to meet basic needs like accommodation, health care and rehabilitation programs.

The coronavirus crisis, and the fear of possible outbreaks, brought that issue to the fore, especially after violent protests erupted in several prisons in early March.

Italy was the first country in Europe to battle the coronavirus, as well as one of the hardest hit, with more than 30,000 deaths and 220,000 infected. But the nation has also been in a decades-long battle against the mob.

The coronavirus outbreak has forced the country to balance the rights of prisoners and the constitutional right to health, for the individual and as a collective interest, with fears that Italy was growing more tolerant of a longtime scourge.

The government scrambled to make amends, as critics, including opposition lawmakers and even some members of the majority, said the mobsters were using the increased risk to their health from the pandemic as a get-out-of-jail card. They called for the resignation of the justice minister and announced a motion of no-confidence toward him.

Several prosecutors warned that granting house arrest to certain mafia figures was unacceptable, even under the extraordinary circumstances of the devastating coronavirus outbreak.

The return of the Mafiosi to their homes, where it would be more difficult to monitor their communication with the outside world, would be taken as an indication that Italy was relaxing its fight against organized crime, prosecutors said.

“The Mafia feeds on signs,” said Giancarlo Caselli, one of Italy’s most famous anti-Mafia prosecutors. Allowing a mafia boss to return to his territory “sends a message of retreat, of weakness that the Mafia can exploit,” he added.

To counter overcrowding, the government passed a decree on March 16 that allowed the authorities to shift into house arrest thousands of detainees who had less than 18 months to serve — but only until June 30. Opponents of the move denounced it as a disguised pardon, but the approach was not unusual. Several other countries, including Afghanistan, Iran and Turkey, along with some American states, have taken similar steps.

The increasing use of house arrest and other measures, including postponing new incarcerations, trimmed the prison population to around 53,000, “still very high compared to the real capacity,” said Franco Mirabelli, a senator with the Democratic Party and a member of a parliamentary anti-Mafia Commission.

So far, the policy appears to have diminished the risk of contagion in prisons. Only 137 inmates have tested positive for the coronavirus, two have been hospitalized and four have died. Penitentiary staff has also been affected, with 202 testing positive.

But many inmates did not qualify for the March 16 measure, which excluded maximum-security inmates and others. Instead, they were granted house arrest because their age (over 70) or health (poor) left them especially vulnerable during the coronavirus outbreak.

“The situation in the prisons has changed and puts at risk a greater number of people than before,” Susanna Marietti, the national coordinator of Antigone, an association that promotes prisoners’ rights, said of the authorities who review requests for house arrest.

Over all, thousands of inmates have been granted house arrest, including hundreds who were under maximum security, but the outrage has been greatest over three men: Francesco Bonura, 78, a boss with the Sicilian Cosa Nostra; Vincenzino Iannazzo, 65, a leader of Calabria’s ‘Ndrangheta; and Pasquale Zagaria, 60, a ranking member of the Neapolitan camorra.

The three were being held in isolation under the otherwise-unforgiving program called “41-bis” until the coronavirus started to spread.

“If you are in 41-bis, you are isolated; you can’t get coronavirus because you are inaccessible; you have no contacts with your family, your lawyers; you live behind bulletproof glass; your health is absolutely secure,” said Lirio Abbate, an anti-Mafia activist who writes for L’Espresso magazine, one of the publications that put a spotlight on the use of house arrest. “We all have a right to health, but in these cases, there was no sense that there was any real risk” in prison.

But others pointed out that every case had been evaluated by judicial or prison officials. This month, the government even passed a measure making house arrests in the case of mobsters contingent on the approval of a Mafia prosecutor.

“Magistrates decide on a case-by-case basis,” evaluating the opinions of doctors, prison wardens and other considerations, said Ms. Marietti. “Then they weigh two rights. On one hand, the health of the inmate; and on the other, the safety of citizens.”

Mr. Mirabelli, the senator, said the three mob bosses had serious health issues. Mr. Bonura, who has less than a year to serve, was “very ill”; Mr. Iannazzo had a tumor; and Mr. Zagaria has a heart condition.

Over the weekend, with the pandemic easing, the government issued a new decree that called on judges to review their earlier house-arrest decisions to see whether it was safe for the mobsters to return to prison, but only after consulting with regional health authorities to ensure that the inmates’ health would not be compromised.

“No one must think that they can take advantage of the coronavirus health emergency to get out of prison,” the justice minister, Alfonso Bonafede, said after a late-night cabinet meeting on Saturday.

Italian news outlets reported on Wednesday that the judicial authorities had revoked the house arrest of at least one Mafioso, Antonino Sacco, who had been sent home because of coronavirus concerns, and that the cases of other mobsters were under review.

Not everyone has been allowed to go home. Last February, Raffaele Cutolo, 78, once the leader of the Nuova Camorra Organizzata, a Neapolitan gang, was hospitalized in Parma with pneumonia. Even so, his lawyer, Gaetano Aufiero, said, he was not optimistic because his client was a high-profile criminal.

“He is old, ill and has a constitutional right to his health,” he added. “In jail, he risks dying.”

Franco Cataldo, now 84, was among those given house arrest for health reasons. He is serving life imprisonment for participating in the abduction of Giuseppe Di Matteo, the young son of a Mafioso who became a prosecution witness. The boy was murdered 26 months later in 1996, and his body was dissolved in acid.

Alfonso Sabella, the prosecutor who handled the case, said the fact that he was unable to stop that killing still kept him up at night, but he understood why Mr. Cataldo — who has several illnesses, including cancer — got out of jail.

“If our system is unable to grant him his right to health, this man has the right to get out,” Mr. Sabella said.