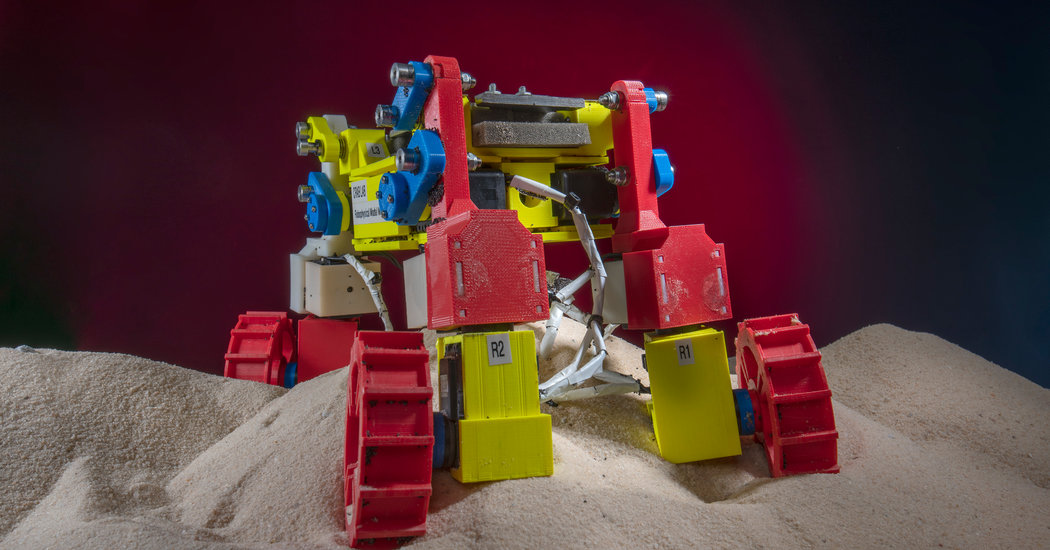 Driving up a sandy hill on a distant world is a good way to get stuck.

A decade ago, NASA’s Spirit rover died on Mars after it drove into a sand trap. For months, the mission managers on Earth sent commands for the rover to spin its wheels, but Spirit could never wriggle free. When the Martian winter arrived, Spirit fell silent forever because its solar panels were pointed away from the sun, ending a mission that had spent more than six years aiding discoveries on the red planet.

Engineers at the Georgia Institute of Technology have come up with a more elaborate choreography of motions — a combination of swimming, walking and rolling — that could help future rovers avoid a similar fate, and even allow them to traverse more challenging terrains instead of driving around them.

“When you only have wheels,” said Daniel I. Goldman, a professor of physics at Georgia Tech, “that limits your ability to go anywhere.”

The wheels of the miniature Georgia Tech rover do more than just roll. The researchers describe a motion in which the front wheels stirred up granular material — poppy seeds, it turns out, work well for this sort of experiment — and swept it toward the rear wheels. At the same time, the rear wheels wiggled side to side in a paddling-like motion, pushing the rover up a sandy slope.

With the material pushed toward the back, the rover was more level, and that helped it move up an incline.

The work builds on a NASA mission called Resource Prospector that was to send a rover to study ice in a polar region of the moon. The ice is expected to be a key resource for a future moon colony. The water molecules would not only give people living there something to drink, but could be broken apart into oxygen and hydrogen.

NASA engineers built a prototype called RP15, which included a suspension that allowed the rover to lift a wheel and move it forward, similar to the way you lift your foot as you walk.

Although the Trump administration’s goal is to send astronauts back to the moon by 2024, NASA canceled Resource Prospector in 2018, saying it did not fit into the current program. RP15 was packed up and put away.

Dr. Goldman had already started collaborating with the NASA engineers to study the different ways RP15 might be able to move. Siddharth Shrivastava, then a high school student working in Dr. Goldman’s laboratory, led the making of a miniature version of RP15, which they called Mini Rover.

The test chamber could be tilted at different angles, and the granular properties of the poppy seeds could be altered by blowing air through them.

Mr. Shrivastava, now an undergraduate student at Georgia Tech, experimented with different motions to see what worked best. “I kind of just toyed with a lot of different gaits,” he said.

This was not the first time Dr. Goldman had tackled the problem of climbing sandy alien hills. In years past, he built a six-legged robot that looked somewhat like a rover on stilts, and another that resembled a sidewinder snake.

But the key for the earlier robots was to try to not disturb the soil, and to avoid digging a hole to get stuck in. “We found the rule seemed to be, ‘Do no harm,’” Dr. Goldman said. “Keep the material as solid as possible as long as possible.”

The Mini Rover upended this thinking, Dr. Goldman said. “You make this giant mess, particularly with this rear motor paddling gait,” he said. “And that mess, if you make it right, turns into a good fluid that you can kind of swim and crawl through, which we hadn’t expected.”

The four-wheel design, about the size of a golf cart, is largely based on Resource Prospector, but William Bluethmann, who is leading the rover development of VIPER and an author of the Science Robotics paper, said his team will be exploring some of the newer motion strategies.

The thinking is that the novel locomotion would be used only in emergencies “where you get stuck in soft soil and you need to get back on firm ground,” Dr. Bluethmann said.

There are currently no plans to incorporate the locomotion on rovers farther away, such as those exploring Mars. With a moon rover, mission controllers will have near real-time control, with a delay of several seconds between sending a command and seeing what happens.

But it still could be used for a Mars mission, if engineers are able to give the rover the smarts to react quickly on its own in the event that it started slipping or sinking into a sandy slope.

Still, Dr. Goldman thinks the technology could offer more flexibility to future rovers. “This combination of wheels and paddling and lifting, if sequenced properly, is really powerful,” he said. “No longer just wheels at the end of sticks but they are actually active appendages, and I think that’s exciting.”