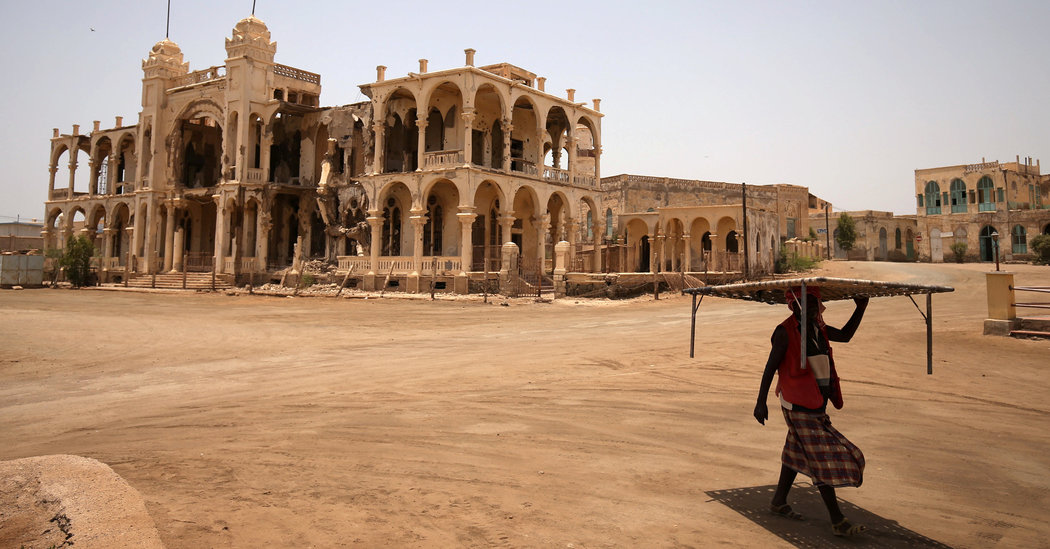 BRUSSELS — A Netherlands-based group of Eritreans sued the European Union on Wednesday, demanding it cease financing a project in the east African dictatorship that uses forced labor, the lawyer representing the group said, the first test of an effort by individuals and organizations to hold the bloc accountable for the way it spends billions in Africa.

The lawsuit in the Netherlands, a member of the European Union that directly contributes to the funding for Eritrea and is home to a large number of Eritrean migrants, will soon be followed by similar legal action in Britain.

The Amsterdam-based group, Human Rights for Eritreans, accuses the European Union in the lawsuit of financing a project that uses forced labor in a country that is notorious for relying on it, of arranging the money through a deliberately opaque process, and of failing to provide meaningful oversight.

An unknown number of workers operating the equipment are forced conscripts, stuck in Eritrea’s notorious mandatory, universal and open-ended drafting of its population — a practice decried by the European Union, and one that the United Nations said was “tantamount to slavery.”

The commission did not immediately respond to a request for comment but has defended the funding by saying that the heavy equipment makes work for conscripts lighter, and that it can effectively scrutinize the project even though it is dependent on the Eritrean government for access to the construction site.

The European Union has so far spent 80 million euros, about $87 million, with €120 million more on the way, all part of a $6 billion pot called the European Union Emergency Trust Fund for Africa, which was created in 2015 to pay for projects intended to curb the migration of Africans to Europe by creating jobs at home.

The fund’s​​ component for the Horn of Africa “does not have documented criteria for selecting project proposals and the European Court of Auditors also highlights serious shortcomings in terms of risk and performance assessment,” said Michèle Rivasi, a French member of the European Parliament. “We have no information; the management of the Emergency Trust Fund for Africa needs to be more transparent.”

The fund is technically a separate entity from the main European Union budget, making it difficult to hold to account. Critics, including rights advocates, migration and legal experts and lawmakers, say the opacity is deliberate. The establishment of the fund was approved by European governments at the height of the migration crisis and is unusual, but not unique.

Emiel Jurjens, the Dutch lawyer lodging the lawsuit on behalf of the Eritrea Dutch group, said the European Commission was likely to argue that Dutch courts had no jurisdiction, and if successful, it could act with impunity. If the court challenges fail, he said, “it would create a bulletproof way for the commission to fund projects that are ethically hard to defend from a human-rights point of view.”

The European Parliament will vote on Thursday on a motion to freeze such spending in Eritrea, on the grounds that the European Commission does not have any genuine oversight of how the money is being spent.

Eritreans, who have historically been in the top nationalities of people seeking asylum in Europe, have long fled to the Netherlands, Britain and other European nations, as their country, the underdog winner of an independence war against Ethiopia in the 1990s, has become a hermetic dictatorship led by a former rebel, Isaias Afwerki, in the past two decades.

The lawsuit and the vote come after a January investigation by The New York Times into the European Union’s spending in Eritrea, and cite it in their supporting documentation. The commission has said that the project was monitored by the United Nations Office for Project Services and that European Union ambassadors were able to visit the construction site, but observers say there is no meaningful oversight.

The ambassadors who visited the site in February were escorted by Eritrean government officials, and independent access is prohibited.

The United Nations Office for Project Services does not have an office in Asmara. Asked the number of conscripts at the construction site and their working conditions, the European Commission sent The Times a link to the page on the Eritrean Information Ministry website, which outlined pay, leave and work conditions for conscripts that could not be verified.

The Eritrean government, having said it would consider abolishing conscription when peace with Ethiopia was achieved, has failed to do so, despite an agreement in 2018 that secured Prime Minister Abiy Ahmed of Ethiopia the Nobel Peace Prize.

“The E.U. is coming under scrutiny on a number of levels — both close to home at the level of the European Parliament, and further afield, with the filing of a lawsuit in the Netherlands. This can only be positive,” said Laetitia Bader, the Eritrea expert at Human Rights Watch.

Habte Hagos, a co-founder of the London-based group Eritrea Focus, the organization behind a British lawsuit, represented by Duncan Lewis Solicitors, left Eritrea for Britain as a young man. He expressed disbelief that the European Union was paying for a project that used conscripts, and even more so that his adopted country was contributing.

“I find it absolutely shocking for the European Union, given its commitments to human rights, to be involved in this place where people are enslaved for years on end,” he said. “In terms of the United Kingdom, a country that outlawed slavery a long time ago, it seems to me like double standards,” Mr. Hagos added.