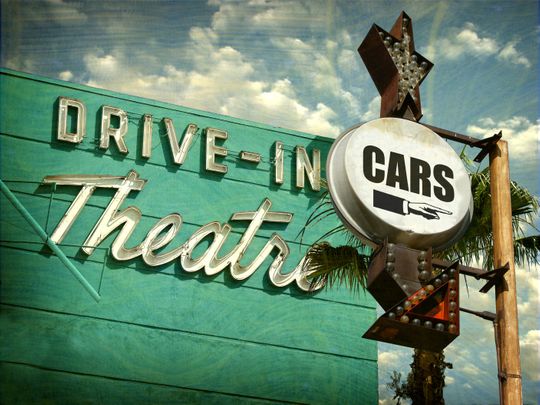 Brace yourself Dubai. A drive-in cinema is soon returning to a parking lot near you.

Years after the city’s trusty Rex Drive-in Cinema rolled up its screen, theatre juggernaut Vox Cinemas is opening up a new drive-in venue at Mall of the Emirates, Dubai.

The city had been abuzz ever since the first images of the set-up dropped online. But Vox Cinemas itself finally confirmed and rolled out its teaser across social media platforms this week in a tweet that simply stated: “Grease your wheels… A new cinematic experience is coming to Mall of the Emirates. Stay tuned.”

Pricing details and the opening date of the drive-in theatre have yet to emerge, but we can tell you that the outdoor cinema will be located near the Level 3 car park of Mall of the Emirates, close to Ski Dubai. Pictures that have emerged on social media indicate a single screen with the mall parking converted into a makeshift theatre.

Cinemas across the country have been shut for close to two months in light of the coronavirus pandemic that has affected more than four million people globally. Even as restrictions are gradually easing across Dubai, with the public parks, hotel beaches and malls re-opening in recent days, there has yet to be an announcement of the opening of cinema halls in the UAE at this time.

The drive-in concept by Vox Cinemas comes as people are being encouraged to maintain social distancing to curb the spread of the COVID-19 virus that has affected global economies, curbed travel and paralysed the entertainment indusrty.

While we wait for more details to emerge from Vox Cinemas, residents of Dubai from the 80s and early 90s would recall the city’s Rex Drive-In Cinema in Mirdif, on Al Khawaneej Road, which was a popular spot for movie-goers, showcasing Hollywood and Bollywood movies back in the day.

After these theatres were phased out, it would be another few decades before the open-air concept would return to the UAE in cooler climes, with set-ups such as the Urban Outdoor Cinema at the Habtoor Grand Resort in Dubai, with Vox itself rolling out its outdoors concept theatres at the Galleria Mall in Dubai, followed by one at the Aloft Deira City Centre.

Despite the seasonal demand for such outdoor concepts, along with the occasional pop-ups along the way such as last year’s drive-in set-up on Abu Dhabi’s Al Hudayriat Island, the track has never been cleared for something akin to Rex returning to the UAE up until now. Watch this space as we return with more details.