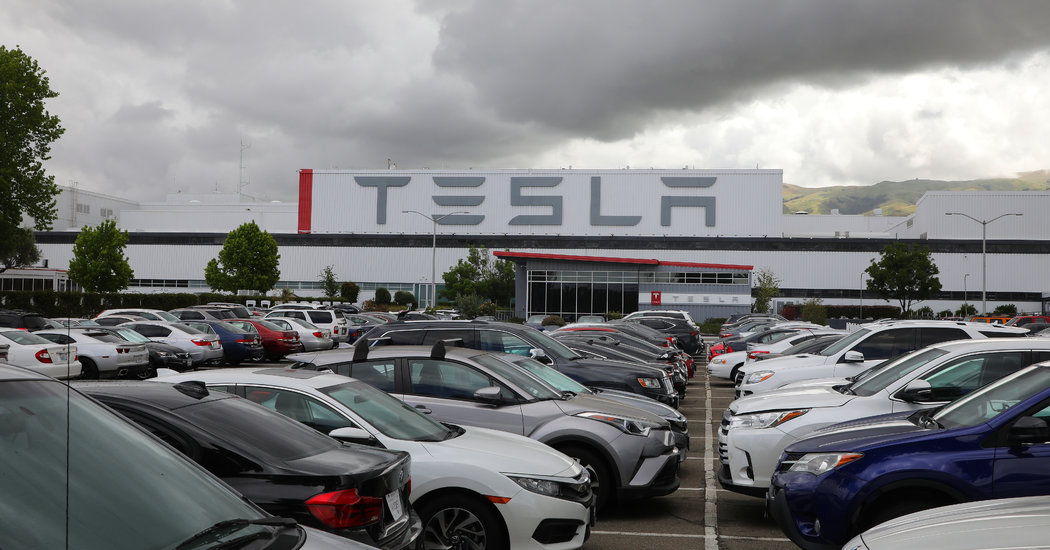 A few months ago, everything seemed to be going Elon Musk’s way, as he presided over an upstart electric car company that was worth more than General Motors, Ford Motor and Fiat Chrysler combined.

That company, Tesla, had reported profits two quarters in a row, proving that it could earn money even as it grew. Its stock was surging. Mr. Musk opened a factory in China and was planning another in Germany. And his other business, SpaceX, was poised to become the first to ferry NASA astronauts to orbit from American soil since 2011, a trip scheduled for the end of this month.

But the coronavirus set Mr. Musk off. Society’s response to the pandemic was “dumb” and a “panic,” he said, arguing that the threat is overstated. And government stay-at-home orders were, in his view, unnecessarily stalling his plans to revolutionize the auto industry and help solve climate change. He attacked local officials in the San Francisco Bay Area for not letting him reopen Tesla’s factory, which he did this week anyway, in defiance of their instructions.

Mr. Musk, the billionaire entrepreneur who co-founded PayPal, has always been volatile. His latest attacks and statements have raised questions about Tesla’s financial health and his own judgment, but they also reflect a recognition of the influence he wields as one of the technology industry’s best-known iconoclasts.

“This is somebody who knows that what he says gets heard across the globe, and tries to make a point about why he doesn’t take system-level constraints as a given,” said Rahul Kapoor, a professor of management at the University of Pennsylvania’s Wharton School.

Mr. Musk’s anger was stoked in March when local officials ordered Tesla to close its factory, in Fremont, Calif., just as the company was poised to accelerate production of a highly anticipated new sport utility vehicle, the Model Y.

Less than a year earlier, the company had been desperate for cash, and Wall Street had grown increasingly skeptical that Tesla could become anything more than a maker of luxury cars that only a sliver of humanity could afford. But Tesla’s fortunes had started to turn before the pandemic.

In October, the company announced a quarterly profit, a sign that it had solved production problems. Tesla’s stock began a long, astonishing rally. Shares peaked at $917 in February, up from $350 only three months before. Despite suffering along with the broader market in March and April, the stock closed at $790.96 a share on Wednesday, valuing the company at about $146 billion. By contrast, investors value G.M., which produces many more cars than Tesla, at less than $31 billion.

By March, Tesla was on a tear. Despite being slowed by the outbreak in China, the new Shanghai factory had reopened. In Europe, Tesla’s Model 3 sedan was outselling cars made by automakers like Volkswagen. The carmaker had just begun deliveries of the Model Y, which starts at about $53,000, in the ballpark of comparable S.U.V.s from BMW and Mercedes-Benz.

But Mr. Musk’s dreams of dominating the car industry were put on hold when Alameda County forced the Fremont plant, which brings in most of the company’s revenue, to shut down in late March.

Mr. Musk resisted closing the plant, and in a late-April call with analysts called stay-at-home orders “fascist.” “They’re breaking people’s freedoms in ways that are wrong and are not why people came here or built this country,” said Mr. Musk, who is a native of South Africa.

That week, he posted several odd messages on Twitter. Tesla’s stock was “too high,” he said, and added that he would sell “almost all physical possessions,” including his homes.

A few days later, Mr. Musk said his new son would be named “X Æ A-12” Musk. He and his girlfriend, the singer and songwriter Claire Boucher, better known as Grimes, have offered differing pronunciations of the name.

Last week, Mr. Musk’s anger about the factory boiled over, and he threatened to move the factory out of California and sued the county in federal court. On Monday, Mr. Musk officially reopened the Fremont plant, to the frustration of some workers and county officials who had been negotiating a reopening plan with Tesla for weeks.

“I will be on the line with everyone else,” he wrote on Twitter on Monday. “If anyone is arrested, I ask that it only be me.”

Later that day, the county asked Tesla to cease operations until it reached an agreement with local officials. On Tuesday, the county said it had reviewed the plan and “held productive discussions” with Tesla. The county said that it had made safety recommendations and that if Tesla included them and public health conditions didn’t worsen, the company could reopen next week.

County officials did not suggest that they would hold Tesla to account for ignoring the order, but noted that the Fremont police would verify that Tesla was adhering to safety measures as workers “prepare for full production.”

On Tuesday, trucks were leaving the factory carrying cars and S.U.V.s as masked workers milled about. New cars were also parked in rows outside. The parking lot for employees was full.

Tesla and Mr. Musk did not respond to requests for comment.

President Trump, who has been pushing states to allow businesses to restart, voiced support for Mr. Musk, writing on Twitter on Tuesday that California should let Tesla reopen the plant “NOW.”

But the president’s statement is unlikely to sway California’s governor, Gavin Newsom, a Democrat, who has deferred to counties on such issues. The state has authorized manufacturing, but Mr. Newsom said Monday that “if a county doesn’t want to go as far,” local orders would prevail.

Mr. Musk’s decision to reopen the factory has put employees in a difficult position.

Several Tesla employees, who asked to speak anonymously for fear of retribution, said the company was putting a priority on profits over people.

One man who worked at the factory on Tuesday said the company had checked employees’ temperatures at the start of his shift, distributed masks and rearranged a break room. But, he said, little had changed on the production line, where it is hard to avoid coming within six feet of others.

As the factory reopened, Mr. Musk thanked employees for making “the factory come back to life.”

“I have vastly more respect for someone who takes pride in doing a good job,” he said in an email, “whatever the profession, than some rich or famous person who does nothing useful.”