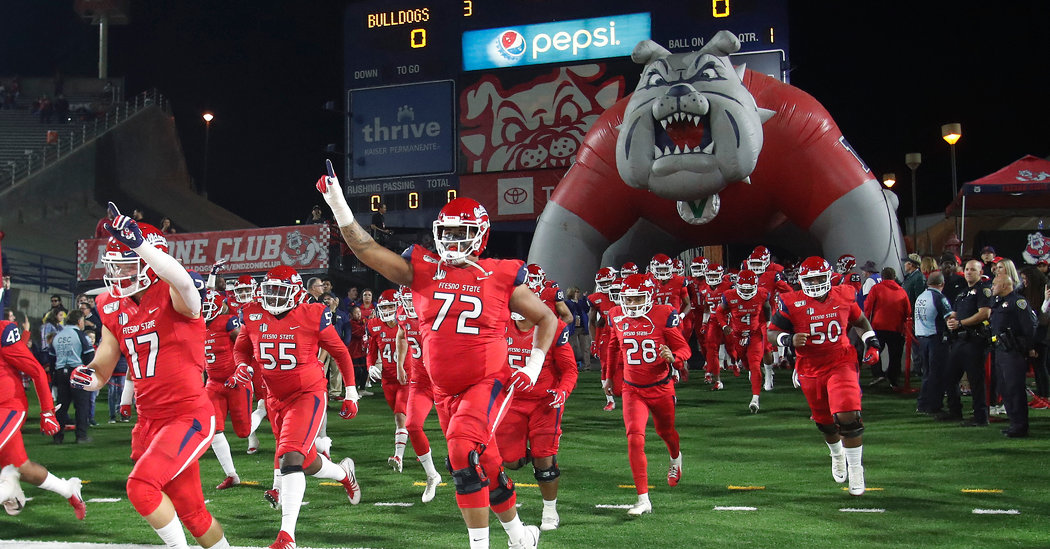 In almost every corner of the college sports world — including the football playoff committee members speaking to Vice President Mike Pence — there has been a precise, unwavering benchmark for football to return in the fall:

If the coronavirus pandemic keeps students out of the classroom, there will not be players on the field, either.

All of the details — the length of the season, starting on time, whether fans will be permitted — would be negotiable, dependent largely on local public health recommendations.

But as N.C.A.A. President Mark Emmert emphasized last week in an interview streamed by the N.C.A.A.: “If a school doesn’t reopen, then they’re not going to be playing sports. It’s really that simple.”

But Fresno State, San Diego State and San Jose State — the only C.S.U. colleges that play in the elite Football Bowl Subdivision — seem to have taken a more lawyerly reading of White’s edict, which stated that a small number of in-person classes would be allowed if such instruction could not be accomplished virtually and was considered indispensible to the university’s core mission.

Exceptions will be allowed only where rigorous health and safety requirements are in place. They might include, for example, nursing students training with clinical mannequins. Lab classes required to complete science degrees could be another. Capstone projects for architecture, agriculture and engineering might also get special consideration.

The exceptions, according to White’s official announcement, would be determined by “thoughtful consultation” with academic senates, students, staff councils and union leadership, and would be based on “compelling educational and research needs.”

Two things were remarkable about White’s statement. The first was how unequivocal it was. The second was how Fresno State, San Diego State and San Jose State interpreted it: Are you ready for some football?

Speaking on condition of anonymity because no plans have been finalized, an official at Fresno State explained that agriculture classes that require students to be out in the fields would be permitted, so for now football — and other sports — would fit into that category. An official at San Diego State, also speaking on condition of anonymity, said that the C.S.U. announcement about virtual classes had yielded misleading headlines, particularly about how the rules might apply to sports. Mary A. Papazian, the San Jose State president, said in a statement that as many as 25 percent of classes at her school would be candidates to remain open.

So naturally, the Mountain West Conference, in which Fresno State, San Diego State and San Jose State play football, issued a statement in conjunction with the three university presidents saying that no decision on athletics had been made. The universities said in separate statements that they would be evaluating athletics.

(There was no need for Craig Thompson, the Mountain West commissioner and a member of the College Football Playoff management committee, to sleep on it last month. He said then in an interview that the conference posted on YouTube: “Unless they’re in full mode with dormitories and housing, and all the other facilities that are open, we won’t have college athletics. We will not have college athletics until the campuses are open.”)

Leaders of the University of California, the state’s other four-year university system, are expected to discuss their plans at a meeting next week. Their decisions will directly affect schools like U.C.L.A. and Cal-Berkeley, but will also have implications for many other universities in Division I.

This sticking a foot in a closing subway door is reminiscent of how everything unraveled in mid-March. On a Tuesday, five days before the brackets were to be unveiled for the men’s N.C.A.A. basketball tournament, the Ivy League canceled its conference tournament and was denounced as a bunch of reactionary killjoys. By Thursday, nearly the entire sports world had shuttered.

Now, two months into the pandemic-related shutdowns, there is fidgeting in some quarters. Fine. When a billion-dollar industry grinds to a halt, there is no shortage of reasons to get it rolling again. It would just be nice if the health and well-being of the performers were at the top of the list.

But Major League Baseball, instead of huddling with its players to develop detailed protocols for keeping them safe, asked the athletes to take a bigger financial haircut. And the U.F.C. deviated from a number of its written safety protocols when it put on a series of fights on Saturday.

What the declaration by White, the Cal State chancellor, did was speed up the timetable for decisions about the season.

Administrators have largely circled mid-July as the time football teams must be back on campus and preparing to play in order for the season to begin on time in early September. That means they must know by mid-June whether they will be allowed to return to campus so that protocols can be put into place.

Last week, Gov. Kate Brown of Oregon said there would be no large gatherings in the state through at least September, which raised the question about whether one of the most anticipated football games of the season — Ohio State’s visit to Oregon, scheduled for Sept. 12 — might be moved to another site.

“That’s not something we’ve discussed yet,” Pac-12 Commissioner Larry Scott said in an interview after Brown’s decision. “But these are the kinds of questions we’ll have to consider. We’re going to have to stay flexible.” (Ohio State Athletic Director Gene Smith said in a text message on Monday that it was too soon to comment on whether an alternative site was being considered.)

By Tuesday, the thought of such logistical pretzels over the coming weeks and months began to feel like folly. Imagine if the starting left tackle tested positive for Covid-19 the day before a game. What would happen to the rest of the offensive line that had been in meetings with him all week or the defensive ends that had been knocking heads with him in practice?

And for what purpose? Is the prospect of Oklahoma State Coach Mike Gundy firing up his charges supposed to provide inspiration for front-line workers? Would the sight of Clemson Coach Dabo Sweeney putting his troops through practice while wearing a mask be a comfort for the laid-off and the furloughed?

It’s not time for bread and circuses. College football can wait until it is safe to play. It may be a billion-dollar business, but it isn’t an essential one.