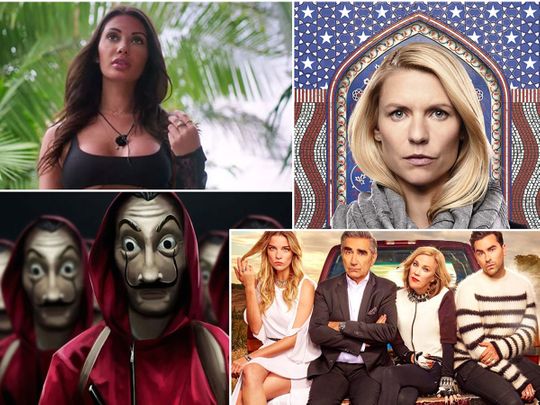 With the coronavirus shutting down most productions, TV makers are now primarily TV watchers, holed up indoors with time on their hands, indulging in soothing re-watches and adding new discoveries to their queues. (Showrunners: They’re just like us!) From period pieces to foreign thrillers, here’s what 11 of them are bingeing.

Liz Feldman is watching “Too Hot to Handle”

Liz Feldman had planned on taking a trip after she finished working on the most recent season of “Dead to Me,” in hopes of sparking some creative inspiration. But now, stuck at home during a pandemic, the Emmy-winning TV writer has discovered the next best escape: “Too Hot to Handle.”

Shot on the beaches of Punta Mita, Mexico, and starring a cast of scantily clad contestants, the Netflix dating show has become Feldman’s new obsession. “I’m sort of just leaning into it,” she said. “In the past I was a little bit snobby about reality television.”

Liz Tigelaar was a writer on “Nashville” and “Casual,” among other shows, before creating Hulu’s high-profile literary adaptation “Little Fires Everywhere.”

In her spare time, she usually likes to dive into sharp single-camera comedies like “Better Things,” “Fleabag” and “Catastrophe,” but those haven’t been doing it for her lately. Instead, she has turned to the high drama and deadly stakes of “Homeland.”

“I’m actually enjoying getting sucked into something that’s bigger than what we’re going through,” Tigelaar said.

The writers really know how to “arc out a season,” she said, and make it “so twisty-turny and action packed and compelling.” She dreaded the show’s final episode, which aired on April 26, and might start again from the beginning now that it’s done, she said.

“Who would have thought: Joey Potter to Carrie Mathison,” she said. “What a journey!”

Dan Levy created “Schitt’s Creek” with his father, Eugene, and served as showrunner, star, writer and occasional director for the beloved Canadian comedy, which wrapped its final season in April.

“It’s a reality show about six young men and women who share a house or an apartment with the intention of coupling up, and it’s very slow in a way that’s incredibly calming for me,” Levy said. “I’ve gone, I think, 36 episodes into a single season and none of them have even kissed.”

Levy warned that the show takes a bit to get going. “At first you don’t really know what’s going on – it’s just six people having small talk for an entire episode,” he said. But the payoff is gratifying.

“There’s a warmth and a generosity to the experience of what goes on in that house,” he said. “It’s been a really nice, safe place knowing that at the end of the night, I can always go back to these people.”

Dahvi Waller’s writing rEsumE includes “Desperate Housewives” and “Mad Men,” as well as “Mrs. America,” her new critically acclaimed FX miniseries. “Mrs. America” chronicles the real-life battle over the Equal Rights Amendment and the soul of feminism. But when it came time to shelter in place, she preferred the lighter side of television.

“I didn’t want anything that was too realistic or dystopian,” she said. “I’m definitely looking for an escape.”

Waller discovered “Schitt’s Creek” during quarantine and is glad she did. “First off, I’m from Canada, so watching a show filmed in Canada is very comforting,” she said. “It’s also just so funny.”

“You can digest three or four a night,” she added. “It’s really going to get me through.”

Liz Meriwether made her splash in TV as the creator, writer and producer of “New Girl” and went on to run ABC’s “Bless This Mess,” a comedy about newlyweds who relocate from New York City to a small town in Nebraska.

Before the pandemic, whenever she was working and found herself losing comedic steam, she would tune in to late-night talk shows to get in the right mindset. These days, her television consumption has turned into a steady diet of “lush BBC miniseries adaptations of novels and dark, moody spy dramas.”

Meriwether wants entertainment that transports her to another time and place, like “Little Drummer Girl,” the AMC miniseries based on the John le CarrE novel, and “Deutschland 83,” the Sundance thriller about an undercover spy living in 1983 West Germany.

“A good spy drama is always a little bit lonely; the spy lives with a secret that separates him or her from the rest of the world,” Meriwether said. “Instead of wanting to watch comedy where I can pretend that everything is happy and fine, I seem to want to watch something that meets me where I am – a little lonely and sad.”

Dan Goor got his writing start in late night (“The Daily Show With Jon Stewart,” “Late Night With Conan O’Brien”) and moved to scripted television, where he wrote for “Parks and Recreation” and co-created “Brooklyn Nine-Nine.”

When he isn’t holding virtual writers room meetings for the eighth season of “Brooklyn Nine-Nine,” Goor is caught up in the world of Netflix’s “Money Heist,” in which a ragtag group of thieves rob the Royal Mint of Spain.

“The plotting is fantastic, the set pieces are great, really excellent cliffhangers,” he said. “I watch it while I walk on a treadmill. It gets your heart rate going.”

For lighter fare, Goor has been bingeing “30 Rock” with his oldest daughter, who’s discovering the show. “It’s really fun to watch it through (her) eyes,” he said. “I had forgotten those early episodes, and they’re great.”

It’s a cliché to call someone “the hardest working person in show business,” but if anyone has a legitimate claim on the title, it’s Greg Berlanti. The executive producer of more than 20 shows, he also has recent writing credits on shows like “You,” “Titans” and “All American” and is responsible for the CW’s sprawling Arrowverse, including the concluded “Arrow,” “The Flash” and “DC’s Legends of Tomorrow,” among other series.

So it’s surprising to discover that there are corners of television where he has never ventured before. Namely: survivalist reality shows.

“My partner and I have watched every season of ‘Alone,'” he said, “Survivalists get placed somewhere horrible and alone and see how long they can survive off of whatever they can forage.”

Berlanti recommends starting with the second season, his favorite, which features “a really emotional ending.”

He has finished the series, and the streaming algorithms have started offering up darker reality fare; Berlanti has moved on to “60 Days In,” about people who go undercover in prisons.

“We’re looking to be gripped by things, in its purest form,” Berlanti said. “Stuff that can actually do the job of making us forget for a minute or two.”

Courtney A. Kemp is watching “Too Hot to Handle”

Courtney A. Kemp got her start in television writing for “The Bernie Mac Show” and went on to work on “The Good Wife” before creating the popular Starz crime saga “Power.” She isn’t ordinarily a reality TV person, but these days she’s making an exception.

“Too Hot to Handle’ is something that was recommended by a friend, and I ate it up,” she said. “It’s the best silly reality show for this particular time.”

The concept is apt for our socially distanced era: Attractive people who usually have sex first and ask questions later are brought together, and then forbidden from touching each other.

“They have to struggle with trying to relate to each other without the universal language, and it’s pretty amazing,” Kemp said. “If you’re a writer, get ready for some great dialogue.”

As a creator, with Bill Hader, of HBO’s “Barry,” Alec Berg has spent two seasons weaving comedy from assassinations, sensitive Chechen gangsters and at least one feral young martial artist. But even he was stunned by what he saw in “Tiger King.”

“What a menagerie of lunatics – it was kind of awesome,” he said. “They’re talking about making it a dramatic limited series and I’m sort of like, what do you do to make it more compelling than it already was?”

Berg, who has spent much of his career writing and producing acclaimed sitcoms (“Silicon Valley,” “Curb Your Enthusiasm,” “Seinfeld”) also found time to finally finish watching TV’s reigning Emmy winner for top comedy, “Fleabag.” It was the rare show that he found himself bingeing, he said, thanks to its terrific pacing and Phoebe Waller-Bridge’s performance.

“As much of a bummer as it is to go to the Emmys and lose every damn year like I do,” he said, “to lose to that show didn’t bother me at all.”

Though these days she spends more time writing articles and books, Nell Scovell is best known as a TV comedy writer whose credits include “Late Night With David Letterman,” “Murphy Brown,” “The Muppets” and “Monk.”

But her viewing of choice tends to be thrillers. Right now that means “Money Heist” and “Kingdom,” a South Korean series about a zombie plague and a battle for the throne.

“I only watch TV when I’m working out – that’s my rule,” she said. “I prefer shows with lots of action, suspense and not much dialogue.”

The most recent season of “Kingdom” was more satisfying than the final season of “Game of Thrones,” she added, and “Money Heist” is the perfect show to distract from a grueling bike session.

“You’re pedaling and they’re breaking down the doors in the bank in Spain,” she said. “The plot just barrels.”

Tanya Saracho wrote for “Devious Maids” and “How to Get Away With Murder” before creating the Starz family drama “Vida,” which just started its third and final season.

When she’s writing her show, Saracho makes a conscious effort not to indulge in any TV watching. “I only want to listen to my world and my characters,” she said. During the pandemic, she’s catching up on everything she missed. First up, the British comedy “Lovesick.” “I watched all three seasons,” she said. “It’s just three friends, hapless and feckless.”

Next, she dived into “Feel Good,” a semiautobiographical series written by and starring Mae Martin. “It’s lovely, even in the dark edges,” she said, calling Martin “luminous.”

“We don’t have a lot of masculine-of-center leads,” she added. “I’m always looking for that image of queerness in the media.” Saracho has been careful about the kind of content she has been consuming lately. “In the beginning of this, everyone was telling me, watch ‘Tiger King,’ watch ‘Devs.’ I was like, hold on, I don’t want to slip into any darkness,” she said. “I’m alone with just two cats, and I need lightness.”