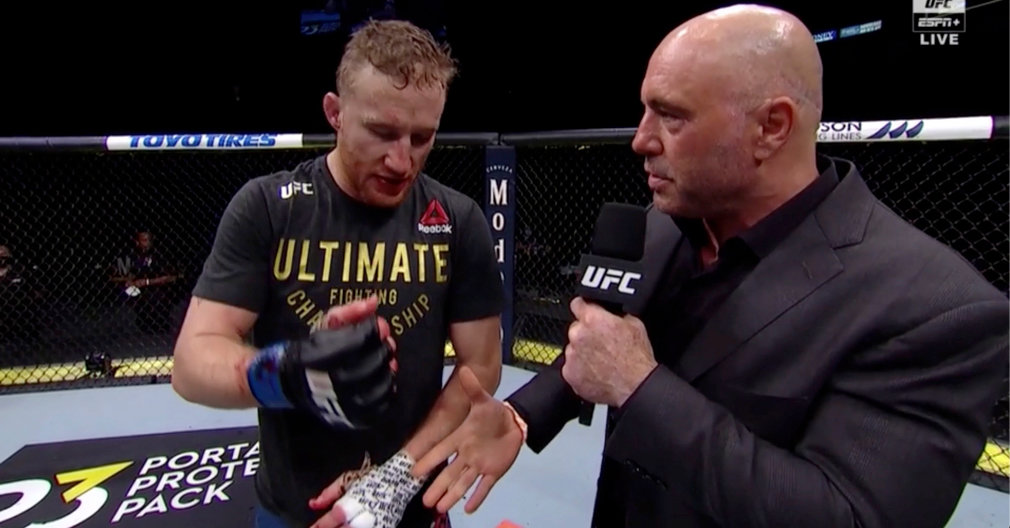 Minutes after defeating Tony Ferguson in the headline fight of U.F.C. 249 on Saturday night, Justin Gaethje stood in the octagon and examined his bloodied hands.

Gaethje, a power puncher, was being interviewed by the television analyst Joe Rogan, and he offered some understandable gladiatorial bravado: “I told my coaches in the back, ‘You’re not going to like it, but I’m ready to die tonight.’” But at that moment Gaethje’s mind was clearly on his hands, and as Rogan went to shake one, Gaethje instead offered a fist bump.

Rogan was having none of it, saying “I don’t care” as he grabbed the hand.

And so went the biggest sporting event in the United States in nearly two months. The long shadow of the coronavirus pandemic hung over the pay-per-view event, which was billed as an attempt to return mixed martial arts to normalcy — and to inch the rest of the sporting world in that direction. But as stay-at-home orders swept across the United States, the Ultimate Fighting Championship insisted that it would overcome the forces that had upended virtually all top sporting leagues.

In the week leading up to U.F.C. 249, the promotion company’s officials spoke of a 25-page document that laid out extensive health and safety protocols that the organization would follow to ensure a safe event.

A review of the guidance in the document — the U.F.C.’s “Jacksonville Event Operations Plan,” a copy of which was obtained by The New York Times — indicates that U.F.C. officials and fighters routinely deviated from the outlined procedures in the days leading up to U.F.C. 249 and on the night of the pay-per-view event itself.

In a statement on Tuesday, the U.F.C. said the plan “provides a road map for a prudent, safe, and responsible working environment” as fighting resumes. It noted that the plan “is not the sum total of our protocols, which also includes Covid-19 antibody blood tests and antigen tests” and said the U.F.C. would be “updating it regularly with key learnings from each event going forward.”

The U.F.C. plans to hold two more events this week at VyStar Veterans Memorial Arena, with 11 bouts on each fight card. All three events have been approved by the Florida State Boxing Commission. Donald Muzzi, the chief ringside physician for the commission at U.F.C. 249, did not respond to a request for comment.

On Saturday at U.F.C. 249, Gaethje and Rogan shouldn’t have touched, let alone stood within six feet of each other. There were supposed to be “no face-to-face ‘in-Octagon’ post-fight or backstage interviews,” according to the plan; instead interviews were to be conducted “via headset with U.F.C. interviewers or commentators who will be stationed in a separate Arena zone.”

Wrapping up the televised event, the analyst Daniel Cormier explained how Rogan had received permission to do interviews that violated social distancing guidelines. “You threw a fit before the show,” Cormier said to Rogan. “This is insane. Everybody’s been tested, we’re all clean.”

A representative for Rogan did not respond to a request for comment.

That wasn’t the only part of the operation’s plan that went unheeded at times. The plan prohibits all “contact-based greetings” and said that all personnel “will be required to wear the face masks and gloves in connection with their job functions,” an edict that Dana White, the U.F.C. president, repeatedly ignored.

On Friday after the official weigh-ins, the fighter Ronaldo Souza participated in a stare-down with his opponent, Uriah Hall, and bumped fists with White. Seconds later, the fighter Michelle Waterson hugged White before her stare-down and embrace of her opponent, Carla Esparza.

White believes that holding U.F.C. events can help show that it is safe to end stay-at-home orders and to resume holding public events. That belief, in part, appears to stem from his longtime friendship with President Trump — who, according to White, was looking at U.F.C. 249 as a blueprint.

Trump made a surprise appearance during U.F.C. 249 in a recorded greeting, congratulating White and connecting the bouts with the return of more live competition. “Get the sports leagues back, let’s play,” Trump said. “You do the social distancing and whatever else you have to do, but we need sports. We want our sports back.”

Despite the positive tests, White declared the event a success and on Monday said other leagues and states had already reached out to him for information. Most major sports leagues, however, have suggested that they will mandate lengthier quarantine periods than the U.F.C. has. Team sports will also require more personnel to properly hold an event — even with no fans present.

Most fighters, including Souza, arrived at the U.F.C.’s host hotel in Jacksonville, Fla., on Wednesday and immediately received Covid-19 viral and rapid antibody tests. The viral test used by the U.F.C. takes at least 24 hours to get results, and it was not discovered that Souza had the virus until Friday.

Some of the required personnel arrived less than 48 hours before the event began. One judge did not arrive until Friday night, according to two people familiar with the event who spoke on condition of anonymity, meaning that, at best, the result of his viral test could not have been received until the day of the fights.

Also, it is unclear whether everybody inside the arena Saturday night followed the same procedures. Arena employees, Florida State Boxing Commission staff members, antidoping administrators and news media members were present along with U.F.C. personnel. The event operations plan says that it does not take into account arena or commission employees, though it notes that some vendors will have to follow its guidelines.

Because of the virus’s two-week incubation period, it will not be apparent for a while whether any people who were present Saturday night might have contracted the coronavirus at the event..

Major American sports leagues, especially in team sports, are confronting very different circumstances from those encountered by the U.F.C. They have hundreds or thousands of athletes and even more staff members. They play home-and-away schedules in two dozen states, each with different local government mandates. They have 500-page collective bargaining agreements with athletes that restrict the terms that commissioners can unilaterally impose. (U.F.C. fighters are not unionized.)

The U.F.C. does not have such concerns. It has significant financial leverage over fighters, and public criticism of its health and safety plan could be muted because participants fear legal consequences.

UF.C. 249 participants — including fighters, their cornermen and reporters who attended in person — were asked to sign a participation agreement before the event. The agreement, a copy of which was obtained by The New York Times, said fighters could lose their “purses, win bonuses, other fight-related bonuses and event-based merchandise royalties” if they “suggest or communicate” the event was held “without appropriate health, safety or other precautions.”

White said that only untrue statements about the U.F.C.’s health and safety procedures would violate the non-disparagement clause, and the U.F.C.’s legal team assured members of the news media that they would not be prohibited from reporting on the event, but nothing in the agreement states either of those clarifications.

The M.M.A. Journalists Association, a group of reporters and others who cover the sport, said in a statement that its members should not sign the agreement even if it means skipping coverage of future U.F.C. fights.

“Some of the restrictive language in the U.F.C.’s agreement could have a chilling effect on journalists, possibly limiting their ability to fully and accurately report the facts,” the group said in its statement.