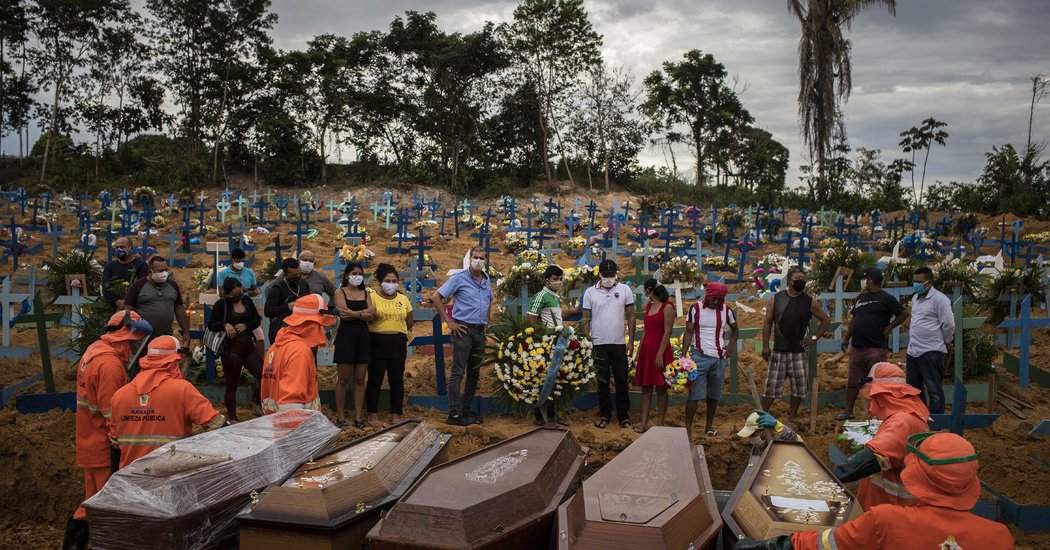 Deaths doubled in Lima, rivaling the worst month of the pandemic in Paris. They tripled in Manaus, a metropolis tucked deep in Brazil’s Amazon — a surge similar to what London and Madrid endured.

In Guayaquil, a port city in Ecuador, the sudden spike in fatalities in April was comparable to what New York City experienced during its worst month: more than five times the number of people died than in previous years.

As the coronavirus’s toll eased in New York and in European capitals, a devastating wave has struck cities in Latin America, one that rivals the worst outbreaks in the world, an analysis of mortality data by The New York Times has found.

Brazilian cities are resorting to mass graves to bury rows of stacked coffins. Hundreds of Ecuadoreans are still searching for the bodies of family members who went to hospitals and never returned.

And while the catastrophes in Europe and the United States were closely monitored, playing out under intense international media scrutiny, much of Latin America’s pain is unfolding far from global view, under governments that can’t — or won’t — offer a full tally of the dead.

“We weren’t prepared for this virus,” said Aguinilson Tikuna, an Indigenous leader in Manaus who has lost friends in the pandemic. “When this disease hit us, we locked ourselves in, locked our homes, isolated ourselves, but no one had the resources to buy masks, medicine. We lacked food.”

The Times measured the impact of the pandemic in major cities around the world by comparing the total number of people who have died in recent months against the average in each place over the past several years.

The totals include deaths from Covid-19, as well as those from other causes, including people who could not be treated as hospitals that became overwhelmed with patients. And while no measure is perfect, the increase in deaths offers the most complete picture of the pandemic’s toll, demographers say.

In Latin America, the pandemic has been worsened by underfunded hospitals, lean support systems and struggling economies with far fewer resources than in Europe or the United States.

Peruvian highways swelled with the biggest wave of internal migration in years as people fled to the countryside when jobs disappeared. Tens of thousands of Venezuelan refugees have been forced to walk back to their destroyed homeland because work in neighboring countries has become so scarce.

The pandemic is hitting the region after a long economic stagnation, which led several countries, including Ecuador and Brazil, to slash health care budgets. These two countries are now seeing the worst death rates in the region.

“We cannot have health systems that only serve people who can afford it,” said Carina Vance, Ecuador’s former health minister. “As long as the person with the smallest income cannot access the most basic and essential health services, everyone is at risk.”

Facing the pandemic in the wake of China, Europe and the United States brought an additional set of challenges. Exhausted local officials in Ecuador, Peru and Brazil pointed to global test shortages and explained they were being outbid by richer nations on scarce medical supplies.

President Trump’s decision to freeze funding for the World Health Organization could hamper its relief efforts, which extend to particularly vulnerable countries like Venezuela and Haiti. And China, which extended multibillion dollar loans to Latin America during the global financial crisis in 2008, has limited itself to sending a few shipments of protective gear and test kits.

Complicating the response further, the disease has hopscotched across the region, defying explanation. Relatively well-off Chile has been spared so far, but so has poorer Paraguay.

Peru’s government responded quickly with a strict lockdown, but deaths have spiked there, much as they have in Brazil and Mexico, where leaders underplayed the virus’s threat.

Brazil, the region’s most populous nation, now has more than 11,519 dead from the virus, according to the official tally. That is one of the world’s highest death counts, but the country’s president, Jair Bolsonaro, continues to shrug off responsibility and deny the need for social distancing. The real figure in Brazil is likely much higher because of limited testing.

When asked about the mounting toll, Mr. Bolsonaro replied, “So what? I’m sorry. What do you want me to do?”

The virus has been particularly hard on Manaus, a hot, humid and remote metropolis of two million in the Amazon rainforest. The city recorded about 2,800 deaths in April, about three times as many as its historical average for the month. The increase is comparable to what Madrid experienced at the peak of its epidemic, from mid-March to mid-April, according to The Times analysis.

The outbreak in Manaus laid bare the consequences of Brazil’s deep economic inequality and polarized politics. Manaus has struggled to obtain the medical equipment it needs, said its mayor, Arthur Virgílio Neto.

“We suffer from the absence of federal government,” said Mr. Virgílio, choking back tears. He has blamed the population’s lax compliance with the lockdown on Mr. Bolsonaro’s public disdain toward social distancing.

The delivery of supplies has been further complicated by logistics, since the region has few access roads and must rely on river or air transport to meet its needs, he said.

In the city’s overcrowded cemeteries, gravediggers last month stacked coffins three layers deep in wide mass graves to meet the demand for burials. As hospitals collapsed under a deluge of patients, bodies filled their hallways. Around town, ambulances struggled to collect all of those who never made it to the hospital and died at home.

Manaus’s crisis is also raising concern for the hundreds of Indigenous groups living in the surrounding forest. They often have little or no access to health care, and may be exposed to the virus as they flock to cities to get emergency cash transfers offered by the government or during encounters with illegal miners and loggers who enter their land.

When Aldenor Basques Félix, an Indigenous leader and teacher, fell ill in Manaus with coronavirus symptoms in late April, he was treated at home — he had no money for the bus ride to the closest hospital. As his condition deteriorated, his friends spent five hours trying to reach an ambulance, but couldn’t get through.

When his impoverished community finally got together the money for a taxi, Mr. Basques Félix, 49, was dead. At the hospital, attendants refused to take the body, saying the morgue was full. His friends had to wait with the corpse in an evangelical church until they could find undertakers to take it away.

Brazil’s chaotic response to the pandemic contrasts with the swift and efficient measures implemented in neighboring Peru.

The country’s president, Martín Vizcarra, ordered one of the first national lockdowns in the continent, and sent police and military to the streets to catch any violators. Years of prudent economic stewardship allowed the country to roll out the region’s most comprehensive economic aid package, including cash transfers and affordable loans intended to help citizens stay home.

But the reassurance many Peruvians felt has turned into resignation as the virus has swept through the country.

Mounting deaths last week forced a Peruvian hospital to pile bodies outside. Other hospitals had to treat patients outdoors because they did not have enough beds. In the country’s Amazonian region of Loreto, doctors said Covid-19 patients were dying at a rate of one per hour amid a severe shortage of oxygen tanks.

Overall, Lima had about 6,200 deaths in April, or more than twice its historical average for that time period, and roughly equaling Paris’s death rate in its worst month under the pandemic.

“It doesn’t seem fair,” said Jimena Villavicencio, a 28-year-old accountant on her weekly outing to buy groceries in Lima. “We’ve sacrificed so much.”

In Ecuador, soldiers continue to patrol the streets of Guayaquil weeks after a coronavirus outbreak brought a surge in deaths that was more than five times the average of recent years. That is similar to the increase New York City experienced during its peak.

For two weeks, Guayaquil collapsed, forcing residents to leave dead bodies on the streets for days or bury them in cardboard boxes. With deaths now declining, Ecuador’s government is trying to restart the ravaged economy, announcing last week a gradual release of the lockdown. But nearly a week later, only two of the country’s 221 cities have moved toward relaxing the quarantine out of fear of a new outbreak.