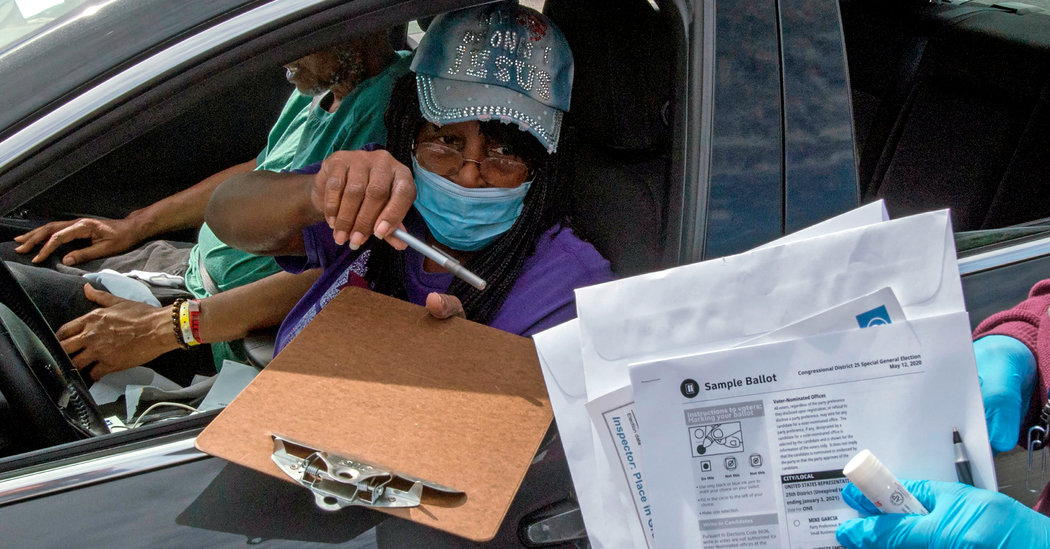 Good morning. Fauci warns of “needless” death. Baseball plans a shortened season. And voters in the L.A. suburbs vote while on lockdown.

A test for Democrats

A congressional district in the Los Angeles suburbs today will hold what’s likely to be the last competitive federal election until November. And it will shed some light on a big question:

Can Democrats — who have done such a good job turning out voters during the Trump presidency — still do so in a pandemic?

Today’s election will decide the replacement for Katie Hill, who resigned from the House after explicit photos of her relationship with a subordinate were leaked. In 2018, Hill became the first Democrat to win the district in almost three decades.

“Katie Hill won in part because of new voters,” my colleague Jennifer Medina, who’s covering the race, says. “So many activists were coming into this district from L.A. and knocking on doors.” During a lockdown, of course, activists can’t knock on doors.

Instead, all registered voters in the district — California’s 25th — have been mailed a ballot. They can return it by mail, drop it off at a polling station or vote in person.

The situation creates a challenge for Democrats. They often rely on get-out-the-vote efforts on Election Day, especially to turn out the large number of younger Latinos in this House district. The district also has many older whites, who lean Republican and often vote early or by mail.

Sure enough, in the current election, more registered Republicans have returned ballots so far, according to the research firm Political Data Inc., even though the district has more registered Democrats.

If Democrats can’t mount their usual Election Day comeback, this race will be different from any other special election since President Trump took office. A Democrat has won every other one in a House district that Hillary Clinton carried in the 2016 presidential election — and a couple in districts that Trump won, too:

Clinton won California’s 25th by almost 7 percentage points. If Republicans win today, it will be a sign that Democrats have some work to do before November.

While Germany was on lockdown last month, each person there with the coronavirus was infecting fewer than one other person on average. Now, that number — known as “R factor” and closely tracked by scientists — has risen to about 1.1. It’s a worrisome change, experts say.

You should expect more flare-ups like Germany’s, as the world moves toward reopening. As The Times’s Donald McNeil writes in his latest overview of the virus in the U.S., “The much-feared ‘second wave’ of infection may not wait until fall, many scientists say, and instead may become a storm of wavelets breaking unpredictably across the country.”

For years, President Trump has fought to keep his financial records secret. This morning, the issue is going before the Supreme Court — and the public can listen to the arguments, starting at 10 a.m. (We’ll have live coverage on nytimes.com and our app.)

Trump’s lawyers are expected to argue that Congress has no legitimate purpose in seeking the records and is simply trying to embarrass Trump. House Democrats have said that obtaining the information is an essential part of their job.

Republicans are divided over what to do. Some say the states in the most trouble are liberal strongholds that have contributed to their own financial troubles. Other Republicans favor more aid; at a luncheon with colleagues last week, Senator Mitt Romney of Utah brought an oversize poster that read, “Blue states aren’t the only ones who are screwed.”

Negotiations over the next virus relief bill are likely to dominate the debate in Congress over the coming weeks.

4. Baseball’s plan to return by summer

The proposal also calls for a rule change likely to rile baseball purists: All teams would use designated hitters, including in the National League, where pitchers have long hit for themselves. Baseball officials said the idea would simplify things, as teams limit their travel by playing more interleague games against local opponents.

BACK STORY: Reconsidering the Arab Spring

Our colleagues in the Book Review tell us that Noah Feldman’s book, “The Arab Winter,” out today, is one of the most anticipated books of the month. In it, Feldman, a law professor, argues that the Arab Spring was not the failure many people now assume.

In a review, Robert Worth, who has long covered the region for The Times, called the book fascinating and often persuasive, if too sanguine at times. I asked Robert how the book made him reflect on his own experiences covering the protests, and he told me:

I enjoyed Feldman’s book because it reminded me of what was so exciting about those days in Tahrir Square: You felt you were witnessing the birth of a nation. Something was happening that had the power to overthrow everyone’s assumptions and create something radically new.

People would say things like, “I’m a citizen of Tahrir.” There was a novelist who would go to the square and say, “Being in a revolution is like falling in love.”

It sounds silly and melodramatic in retrospect. But at the time we were all going around like teenagers, stars in our eyes.

How we grocery shop now

While Costco devotees have long bought items in bulk, many shoppers are turning to the practice for the first time to minimize grocery store runs. They’re buying pounds of potatoes, herbs, Lean Cuisine and more, all while diligently planning meals to use up every last ingredient.

Do you miss your cubicle yet?

The Times’s Alexis Soloski dove into the enduring appeal of the workplace comedy, a genre with nostalgic appeal during the lockdown. “The idea of having an office to go to — an office that doesn’t double as a kitchen table and is only rarely smeared with peanut butter — feels like obscene luxury,” she writes.

P.S. To learn more about the virus and the debate over reopening, join Gov. Mike DeWine of Ohio and Dr. Thomas Frieden, former director of the Centers for Disease Control and Prevention, in a call with readers at 4 p.m. Eastern today.

Today’s episode of “The Daily” is about the lifting of the virus lockdown in Britain.

Lauren Leatherby, Ian Prasad Philbrick and Sanam Yar contributed to The Morning. You can reach the team at themorning@nytimes.com.