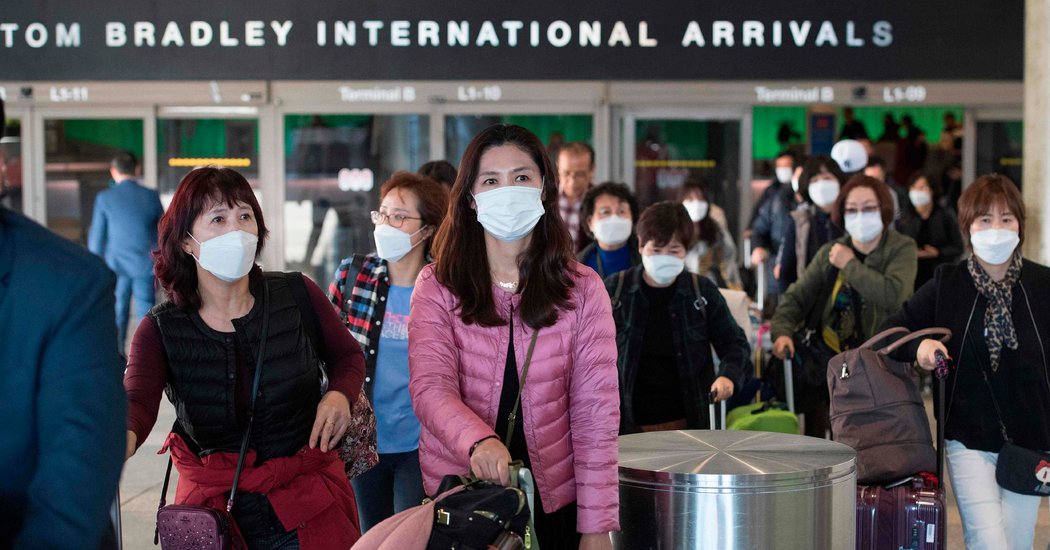 In the early days of the coronavirus outbreak, the United States, like many countries, had a very brief chance to limit the spread of the disease at its borders. Identifying travelers from high-risk countries and tracing their contacts with others would have been critical measures, if put in place early enough.

In California, the largest state and a point of entry for thousands of travelers from Asia, a program was established to do just that. But its tracing system was quickly overwhelmed by a flood of passengers, many with inaccurate contact information, and was understaffed in some cases, rendering the program ineffective, according to a study released on Monday by the Centers for Disease Control and Prevention, which looked exclusively at California.

“Despite intensive effort, the traveler screening system did not effectively prevent introduction of Covid-19 into California,” the report said.

In early February, over 11,000 travelers from China — and later Iran — who landed in California were identified for contact tracing. The hope was to keep track of people traveling from high-risk countries, enabling public health officials to identify possible cases of the coronavirus, quarantine them and contact people who were exposed to them to limit the spread of the contagion.

But when the program was begun on Feb. 5, several weeks had already passed since the disease was first identified in Wuhan, China. On March 17, the program was abandoned so that health care officials could shift their focus to mitigating the spread of the disease within the state. By mid-March, the coronavirus had already established a foothold in California; preventing further introduction from overseas was seen as less important than fighting it on the ground.

“This report is a good example of the challenge of trying to use travel screening to contain and prevent pandemic transmission,” said Dr. Timothy Brewer, a professor of medicine and epidemiology at the University of California, Los Angeles.

The report was prepared by the California Department of Public Health for the C.D.C., which also provided similar passenger information to other states.

A spokesman for California’s health department said the report spoke for itself. When asked if traveler monitoring is a useful tool in fighting a pandemic, the spokesman referred to a passage in the report noting that it can be effective if begun early enough, but that it is particularly difficult with a respiratory disease like the coronavirus, with which transmission can occur before symptoms arise.

The report also said that traveler monitoring is most effective when there is accurate information about passengers and when the number of passengers does not overwhelm the system. None of those conditions existed in this case.

Strict measures in smaller countries like New Zealand and Taiwan are believed to have helped contain outbreaks there, Dr. Brewer said. New Zealand instructed everyone coming into the country after the outbreak to spend two weeks in quarantine, and Taiwan instituted similar measures.

But those are island nations with much smaller populations, and Dr. Brewer noted that Taiwan began installing its restrictions “within one or two days after becoming aware that Covid-19 existed.”

When passengers arrived in California on flights from China during the study period, their information was recorded by customs and border patrol officers and then forwarded to the C.D.C., which in turn sent the contact information to California health officials. Those names were then given to health departments in local jurisdictions throughout the state for contact tracing and follow-ups.

Travelers from Iran were included in the program, called Return Traveler Monitoring, beginning on March 5. The study found that three of the passengers, including two from Iran, were later reported to California’s health department as Covid-19 patients.

The C.D.C. report said that, in California, incomplete information made it hard to fully institute the plan. Sometimes names, addresses or phone numbers were inaccurate, and passengers could not be found for follow-ups.

Also, the number of people to keep track of was overwhelming. During the seven weeks of the program, a median of 1,431 people from Asia entered California per week, the study said. By comparison, passenger identification during the Ebola outbreak of 2014-15 was effective in California, in part, because only 21 people per week came from affected countries in Africa.

The study also cited the issue of asymptomatic patients, who can spread the disease before showing signs of illness.

Still, the C.D.C. report endorsed traveler-monitoring programs, although they are “likely more effective during the initial containment phase” of the outbreak.

Once California’s current outbreak is under control, the study said, public health officials should still try to put in place the tracing program, if another wave of disease emerges. But it recommended that it be done in a more efficient and comprehensive way, particularly in collecting accurate information about the passengers.

The C.D.C. called on airlines to provide flight passenger lists to federal officials and for health departments to use text messaging to communicate with passengers after they leave the airport. It said all of that might be useful to “maintain low disease incidence.”

“The critical words there are ‘low disease incidence,’” Dr. Brewer said. “What they are saying is, this could work if you got on top of it early before your system gets overwhelmed. That’s what Taiwan did.”

He added, “In order to do it correctly, you will have to have significantly more resources than are typically available in public health departments.”