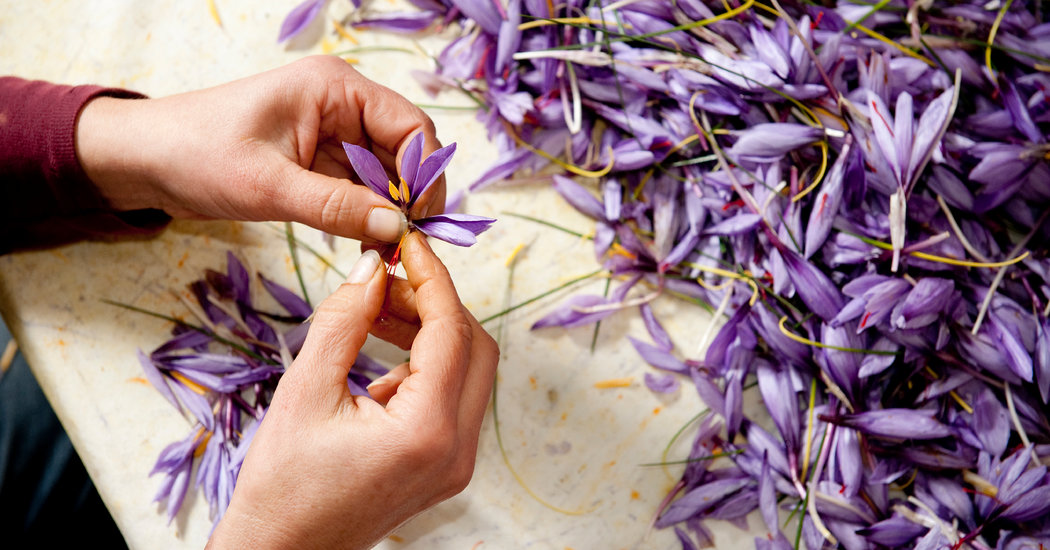 With travel restrictions in place worldwide, we’ve launched a new series, The World Through a Lens, in which photojournalists help transport you, virtually, to some of our planet’s most beautiful and intriguing places. This week, Susan Wright shares a collection of photographs from a saffron harvest in the Abruzzo region of Italy.

A few years ago, though, in happier times, I traveled to this isolated corner of Italy, east of the Apennine Mountains, to photograph the annual autumn saffron harvest.

It was my first adventure across the country’s rugged central mountains — to the wilder side, away from the popular tourist spots, where the terrain is pristine and sleepy medieval villages are scattered throughout the pretty foothills.

Having grown up in a rural setting in Australia, I was fascinated by the Italian agricultural communities: their deep connection to centuries-old traditions, and the infusion of their land and culture with an infectious love and passion.

How wonderful that these rural communities throughout Italy come together for their annual festivals, known as sagre, which are often dedicated to a specific local food.

Giovannina Sarra (often called the Saffron Queen) and her family hosted me and a handful of others at their home. Early in the morning, in the Navelli plateau, we fanned out among the misty, violet-tinged fields and participated in the harvest.

Saffron, which is taken from the stigmas of the saffron crocus, is a lucrative crop. Also called oro rosso, or red gold, it was first introduced into the region around the 13th century — an import from Spain. Prized as an exotic spice, it was sold in the wealthier regions and cities of Milan and Venice, and abroad in France, Germany and Austria.

Saffron is harvested in the hours just before sunrise, while the crocus petals remain closed; this makes the flowers easier to pick and helps protect their precious crimson-red stigmas. The delicate buds are handpicked and placed into baskets.

Later, on the same day, the stigmas — three tiny threads per flower — are separated from the moist petals. It’s a delicate process that takes hours with a skilled and patient hand.

In the evening, over an open wood fire, the bright threadlike stigmas are dried in wire baskets, a process that adds to the richness of both the color and the flavor.

It takes roughly 4,000 flowers to make one ounce of saffron powder — which means there’s a staggering amount of labor packed into the tiny containers in which the spice is sold.

Not long ago, when I sat down to a mouthwatering plate of Risotto alle Milanese (a dish that’s infused with saffron), I recalled the early misty morning I spent with Gina Sarra and her family.

But there’s no doubt that families like the Sarras will one day return to the restorative power of their sagre — and to the many traditions that have endured for generations in the fields of the Navelli plateau and beyond.

Susan Wright is an Australian photographer based in Italy, where she has lived since 2003.