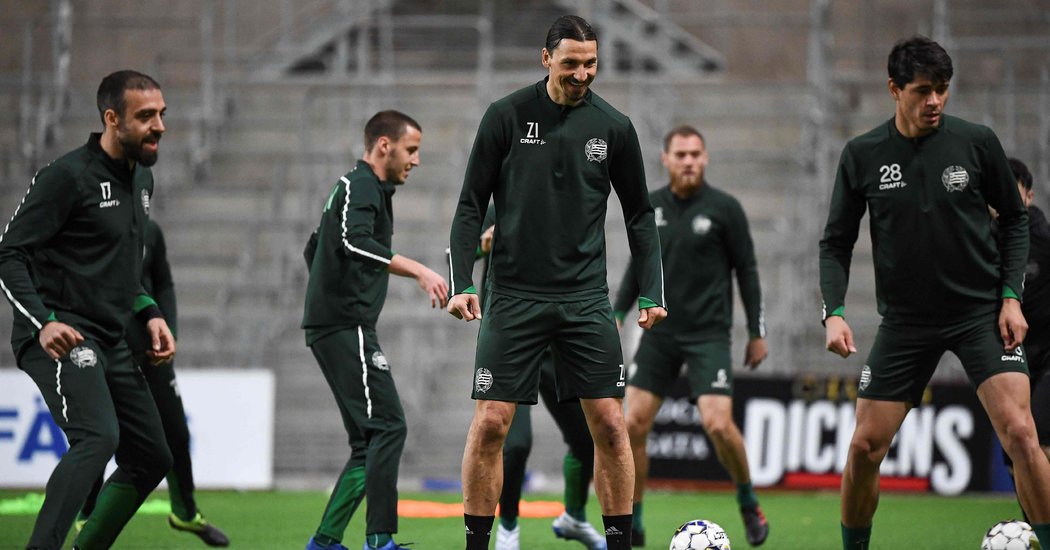 Swedish soccer fans had been hoping that the strange circumstances of the coronavirus pandemic would have a surprising side effect: the return of striker Zlatan Ibrahimovic to his home country.

But now it seems those hopes have been dashed, as Ibrahimovic, 38, is set to return to Italy for a two-week quarantine period before rejoining A.C. Milan, which is starting individual training again. (Cristiano Ronaldo is already in quarantine for a return to Inter Milan.)

Ibrahimovic started his career at Malmo in Sweden before moving on to some of the top teams around the world, including Ajax, Juventus, Inter, Barcelona, Paris St.-Germain, Manchester United and the Los Angeles Galaxy. He played eight games for his latest team, Milan, before Serie A shut down.

He then returned to Sweden and trained with a team he co-owns, Hammarby. That prompted headlines about the return of the prodigal son. Alas, it seems Ibrahimovic is not ready to leave Italian football yet.

But some remarks by Jesper Jansson, the director of football of Hammarby, caused the speculation engine to rev up again. Asked if Ibrahimovic might return to Sweden at the end of the Italian season (whenever that may be), he told the Swedish newspaper Expressen: “I think so. But only Zlatan himself knows. He hasn’t said anything like that, and it’s not that I need to ask him and tell him that we want him here. But I’ve learned that he doesn’t say anything until he’s 100 percent sure.”

While that might seem pretty vague, it was enough to get Swedish fans and the news media fired up again for Ibrahimovic to start adding to his Swedish league goal total for the first time since 2001.

A Top Team Is Shutting Down

Many teams and leagues around the world have talked of their financial hardship during the pandemic. But few top teams have actually shut up shop.

One of the biggest to do so thus far may be the soccer team Tianjin of the Chinese Super League, which said on Monday that it would pull out of the league in preparation of folding.

Tianjin had spent three years in the top division, finishing in a high of third place in 2017 and 14th last season.

When big sports teams anywhere in the world cry poor, there is sometimes the suspicion that they are merely angling for a government handout or tax relief. Once they actually start to close their doors, the signs get a lot grimmer.

The French Open was postponed. P.S.G. has stopped playing. The Tour de France won’t roll down the Champs-Élysées in July. But top-level sports returned to Paris on Monday as horse racing resumed at Longchamp in the Bois de Boulogne.

The horses broke from the gate despite a governmental order banning sports in France until Sept. 1. The government of President Emmanuel Macron decided to give racing special permission to proceed, without fans.

Everyone at the track was required to wear a mask, including the jockeys during the races. Trainers, along with one assistant each, were allowed to attend, but not owners. Many of the track’s buildings were closed, and the sprawling facility had just one entrance open.

The main event was the Prix d’Harcourt, a major race for older horses. Shaman won, and many bettors watching from home were tearing up their tickets after the heavy favorite, the French Derby winner Sottsass, ran fourth.

Horse racing has been one of the few sports to press on in some places in the United States, including at major tracks such as Gulfstream in Florida and Oaklawn in Arkansas.

Stands With Fans in Taiwan

Step 1: Play the games. Step 2: Let the fans back in. That is starting to happen in a few places.

Taiwan’s baseball league got underway in mid-April, a month late, with empty stadiums. But over the weekend, some fans were allowed back, carefully, for the first time.

The crowds were limited to 1,000 fans. Everyone was required to wear a mask, and fans were seated three seats apart, even if they arrived at the game together. There were temperature checks, and no food was served, or allowed to be brought in.

With a record of 14-4, the Rakuten Monkeys comfortably lead the four-team league.

With Taiwan and South Korea now both in action, fans are starting to clamor for the return of the biggest league in the region, Japan. No definite date has been set for a return, but officials are hoping for some time in June. But the All-Star Game, scheduled for July, has been canceled, for the first time in history.