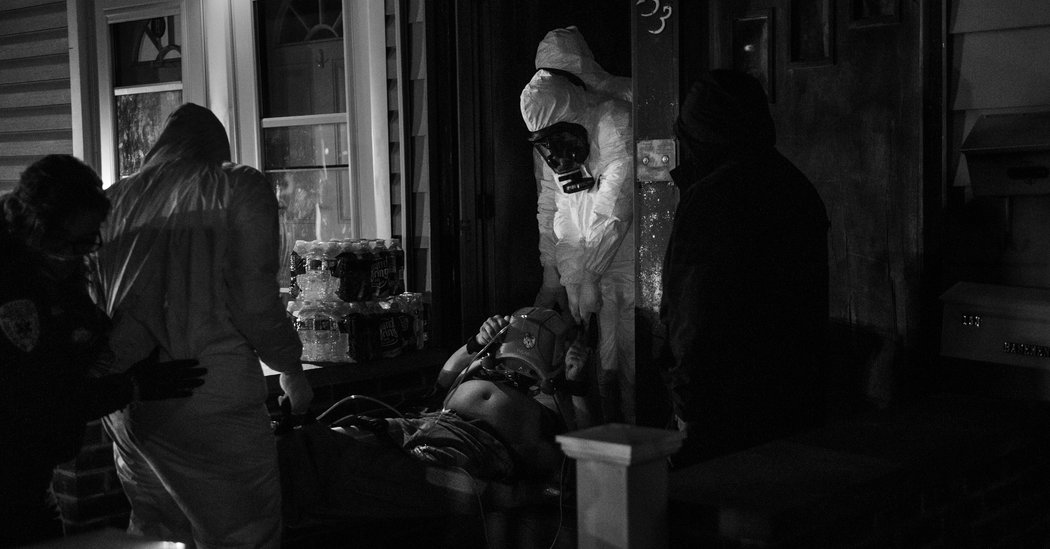 After three years living in Nairobi, Kenya, working as a photojournalist throughout Africa and the Middle East, I decided I wanted move home and pursue a career in public safety. I had always been interested in emergency medicine and was an emergency medical technician in college, so I got recertified and was hired by Empress Emergency Medical Service in a suburb of New York City last September.

I remember reading briefly about the coronavirus earlier this year but not thinking much of it — until the second documented case in New York State was announced in early March, in Empress’s coverage area, New Rochelle.

As cases multiplied, and our work became riskier and more intense, I felt an obligation to document. Over the course of three weeks in April, I photographed my colleagues as we worked to do our part to combat the pandemic that has frozen our country.

Empress’s E.M.T.s and paramedics work shifts that can range from eight to 24 hours. Last month Empress responded to about 350 cardiac arrest calls, many of them the result of complications stemming from Covid-19. The monthly average for cardiac arrest calls before the pandemic was 30 to 40.

A.J. Briones is the operations captain at Empress Ambulance. He has been in emergency medical services for the past 12 years and said he’d never seen anything like this.

“Not many people alive today have ever seen anything like this, nor could imagine that something could cripple the world like this,” he said.

I watched Captain Briones have difficult conversations with people who were likely sick with the virus, the same kind of conversations I was having with my patients.

“I always worry if the family truly understands that this might be the last time they see their family member,” Captain Briones said, “if this would be what they would want.”

Most of the time we don’t know what happens to the patients we treat. I’ve found this to be one of the most difficult parts of the job, especially right now.

We treat people in the field, transport them to the hospital, then don’t ever hear from them again. Often, I don’t know if the patients I brought to the hospital lived or died.

Many of us are also struggling with isolation from friends and family. My colleague, Austin Magnuson, 25, a paramedic from Dallas, has been sleeping in the basement of his home for the past month because he is worried that he might infect his partner and roommates.

I haven’t seen my partner, Maya, or my dog, Bear, since March 14. We decided it was best for Maya to stay upstate because her father suffers from a respiratory illness. We were scared that I could pass the virus to her, which in turn could infect her dad. I’ve found coming home to an empty apartment hard. I know I’m not alone in this experience.

Lt. Rebekah Cosgrove became a supervisor at Empress a month before the coronavirus outbreak hit.

“The hardest part is seeing the toll it will or already has taken on health care workers’ mental health, ” she said.

For most of us on the Empress crews, this is the most death we’ve have ever had to deal with.

“I don’t think I’ve ever come to work and prepared to be dealing with fatalities and loss on a scale like this,” Mr. Magnuson said. “It’s the first time I really thought about losing people I care about. I’ve never felt so powerless.”

“I think for me the biggest thing for me is to take it one day at a time,” he added. “Some days are going to be worse than others. Some days will be more frustrating than the others. I tell myself every day, ‘One day at a time.’”